We waited at the bus stop along the main road until the 409 arrived, taking us right into town. We decide to make an attempt to visit the best of Sintra —The Moorish Castle, the Pena Palace, and the Quinta da Regaleira—in one day. It was ambitious, but we figured why not take advantage of their close proximity to one another and we were already in town, after all.

For 5 euro roundtrip, we saved our legs and hitched a ride to the top to the Moorish and Pena Palaces, then down again; It’s called the Pena Circuit. Your ticket grants you one ride around the circuit, stopping where you please along the way. While frolicking through the forest and hiking up to the palaces was tempting…take the bus.

Riding on the first bus of the day, we had a lot of company—more Americans on this bus than we’d seen on the trip so far. We got off at the Moorish Castle, my idea being to visit the old before the new(er), and we were the only ones there. We bought all of our tickets there (a small discount is applied the more sights you purchase at one time).

We explored the ruins and climbed to the top of the ramparts, the wind all but blowing me away. We were granted views in every direction—of quintas (Portuguese villas) in the distance, the Pena Palace above, and the town of Sintra below. I insisted on climbing to every vantage point to glimpse the next sight. At last, we were joined by others. But before then, the peacefulness of the place was such a reprieve; I am decidedly more an archaeological ruins girl than a full-fledged palace one. 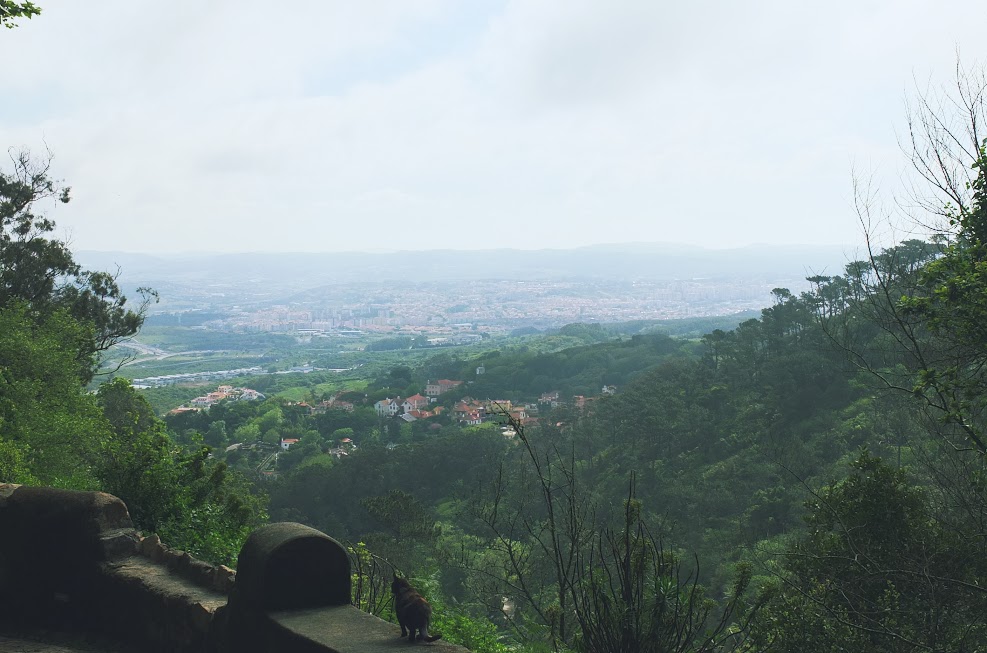 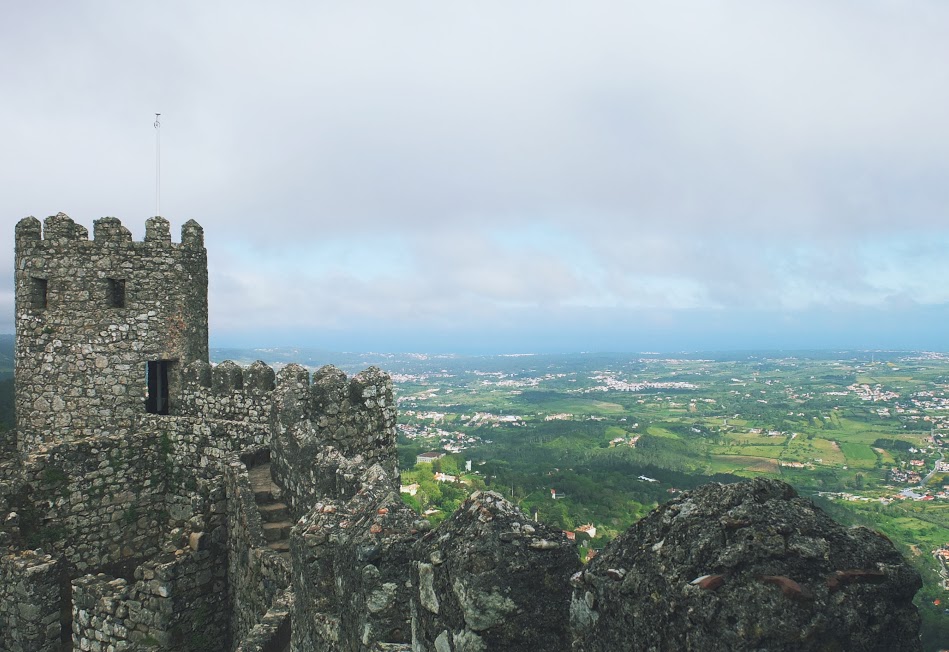 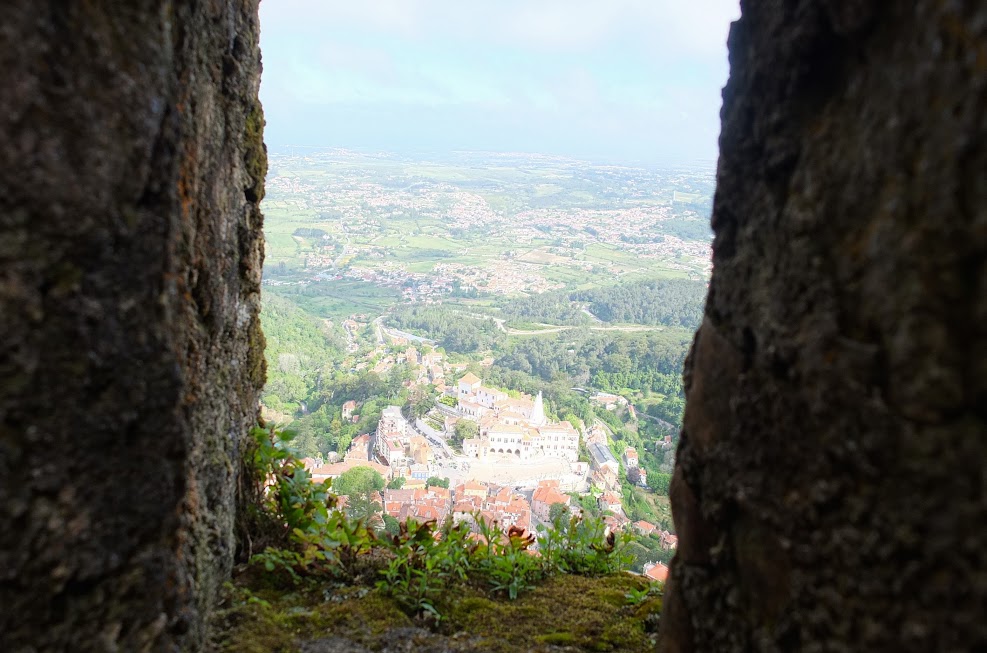 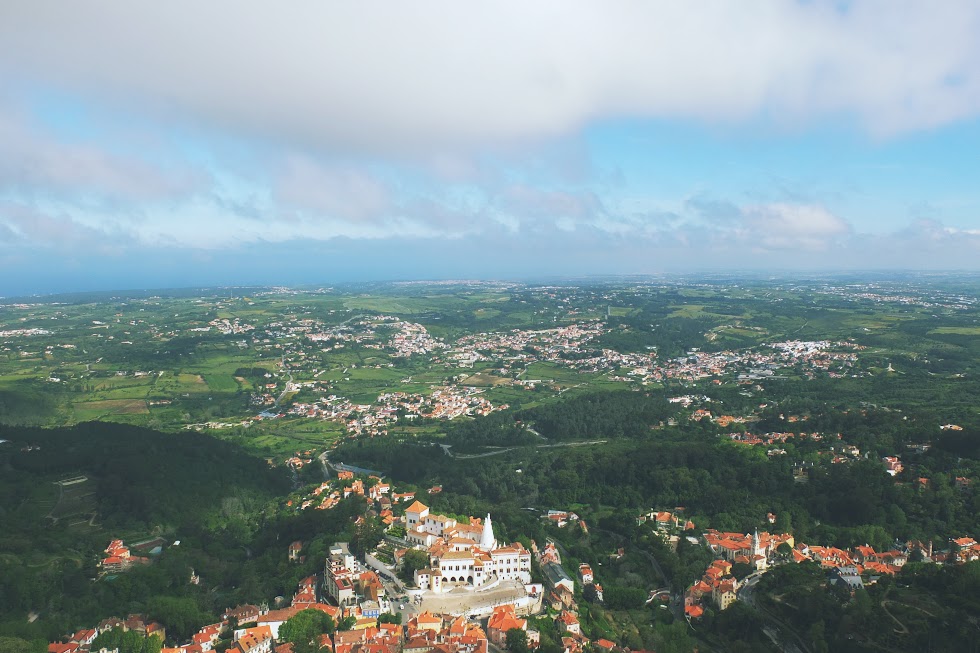 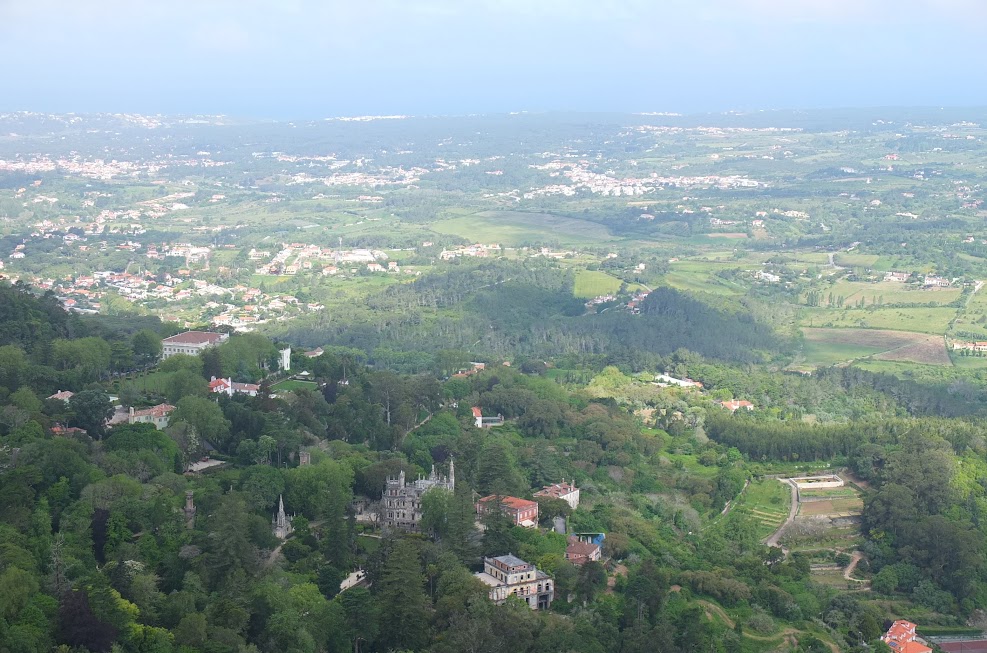 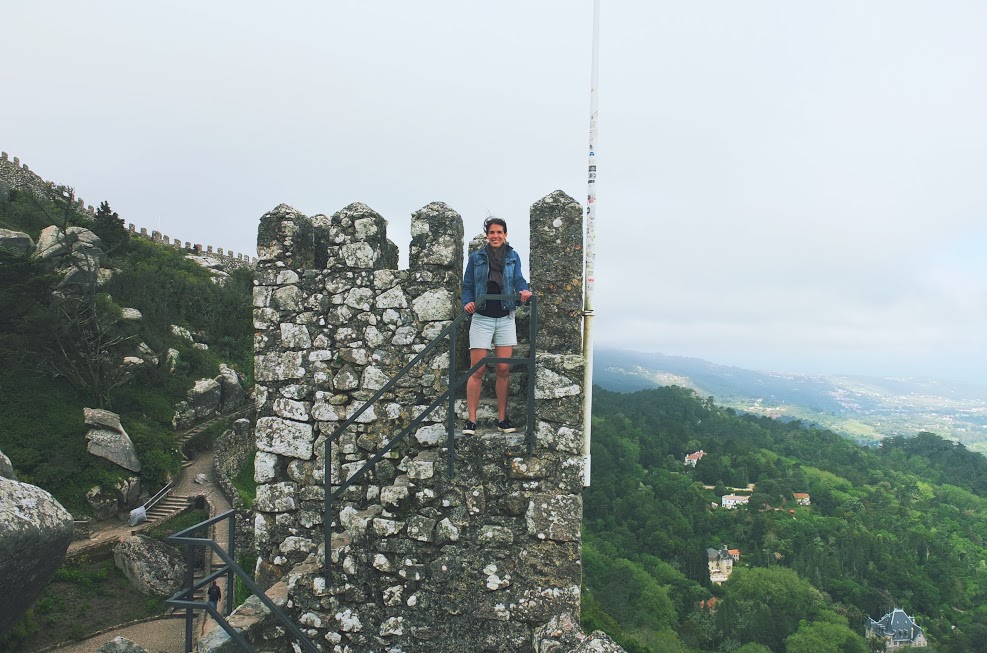 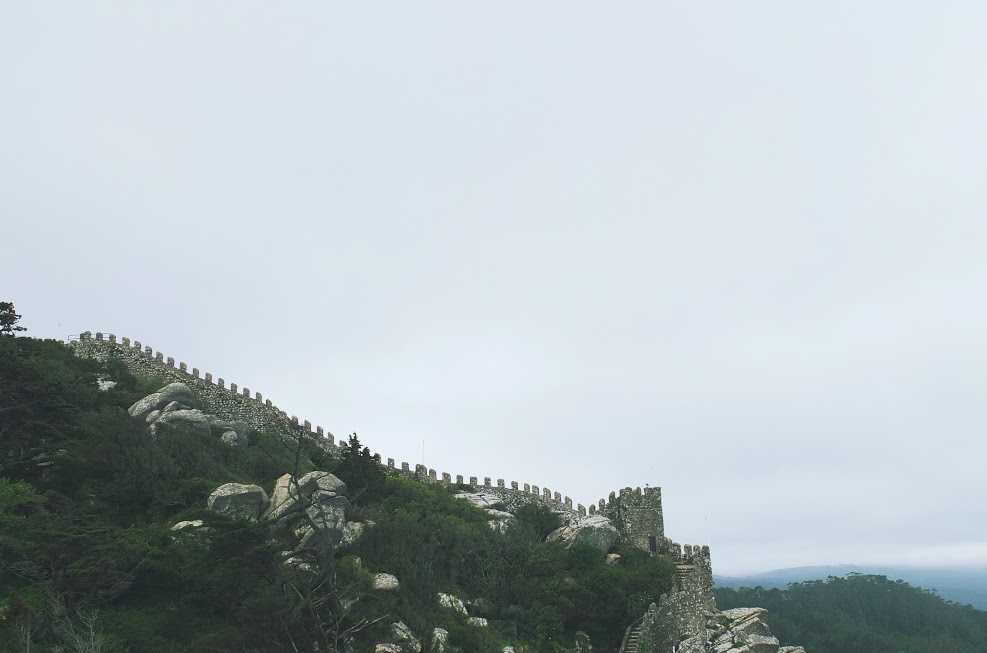 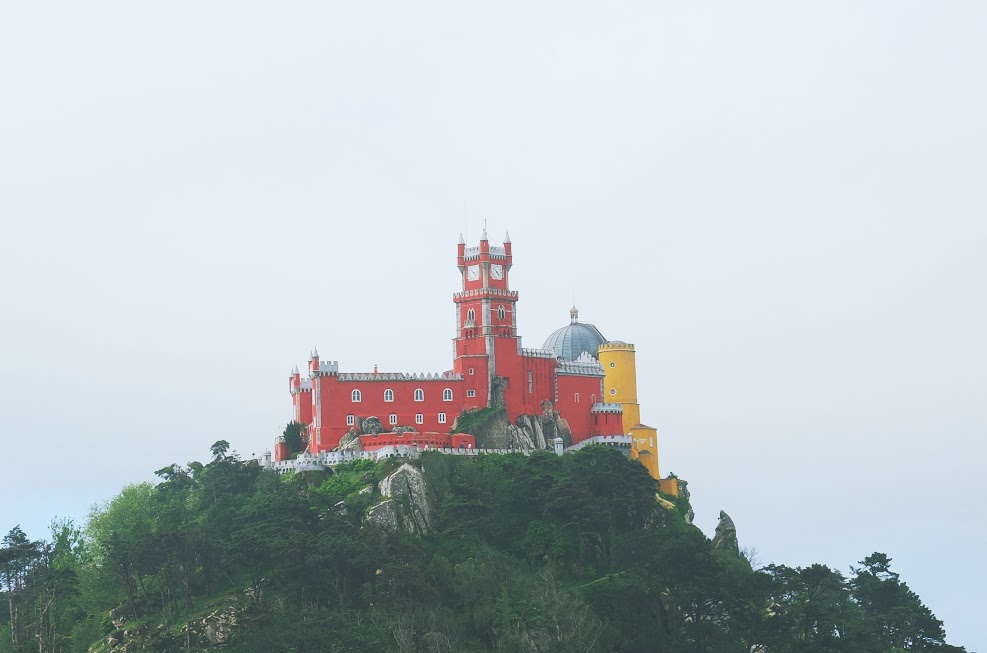 We continued on by foot to the Palacio de Pena. It was packed. Nevertheless, we wandered up the walkway, more of the palace coming into view. It truly is your subconscious Disney dreams realized. It was the colors, I think. That and the shapes of the structure leading you to expect a knights on horseback and the like… Nope, just another tourist bus. We settled in on the patio and had our picnic lunch before venturing into the gardens. 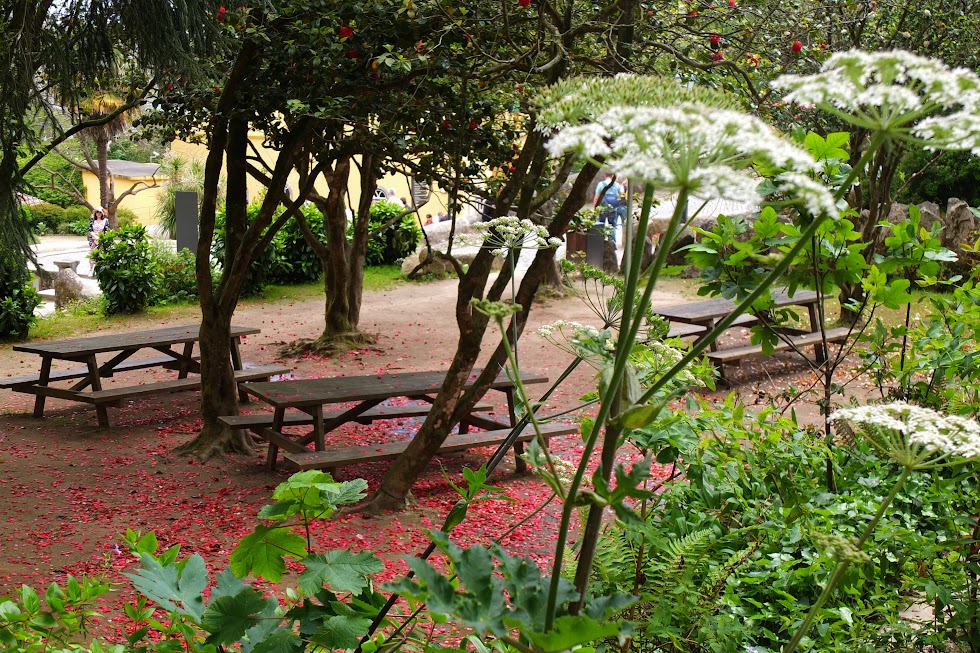 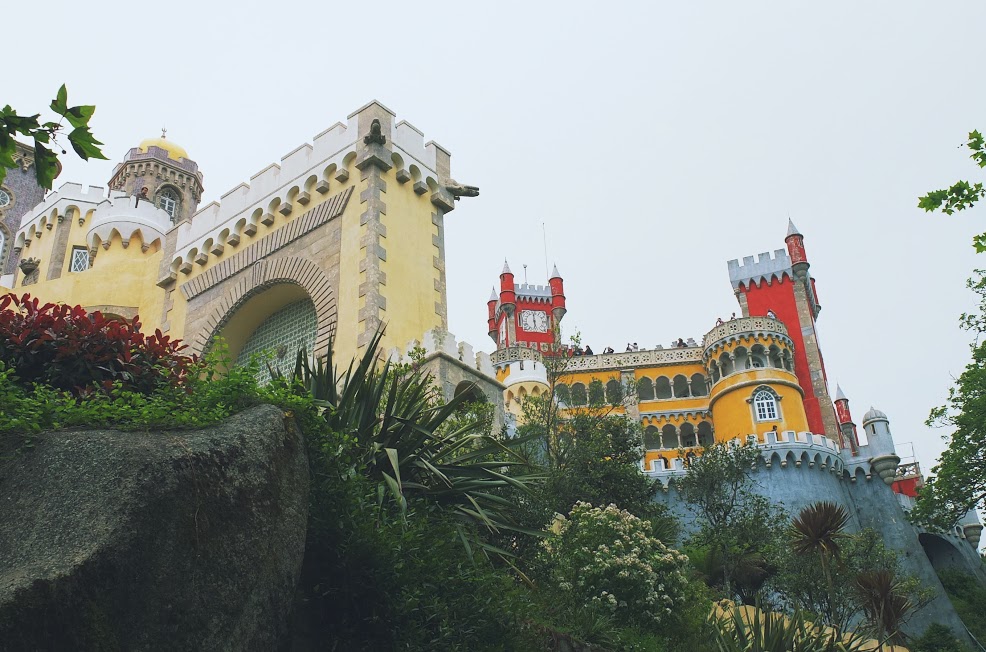 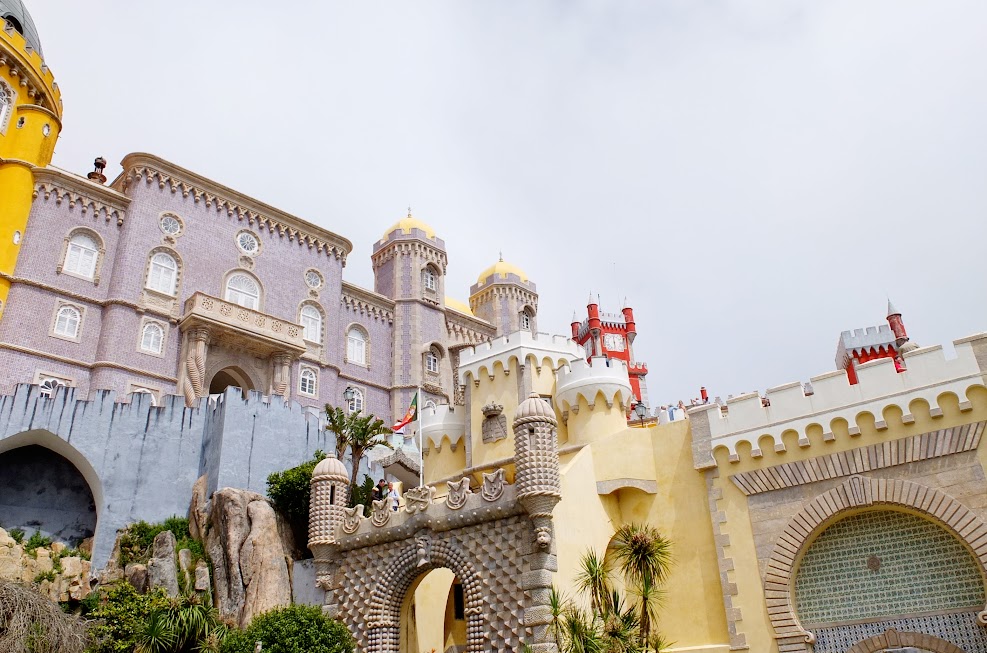 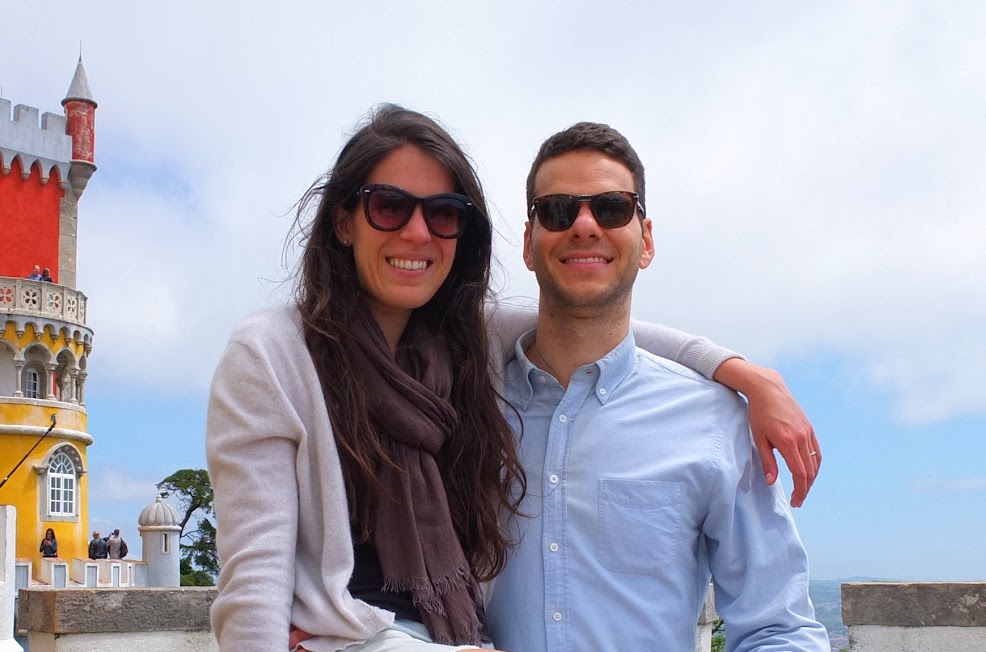 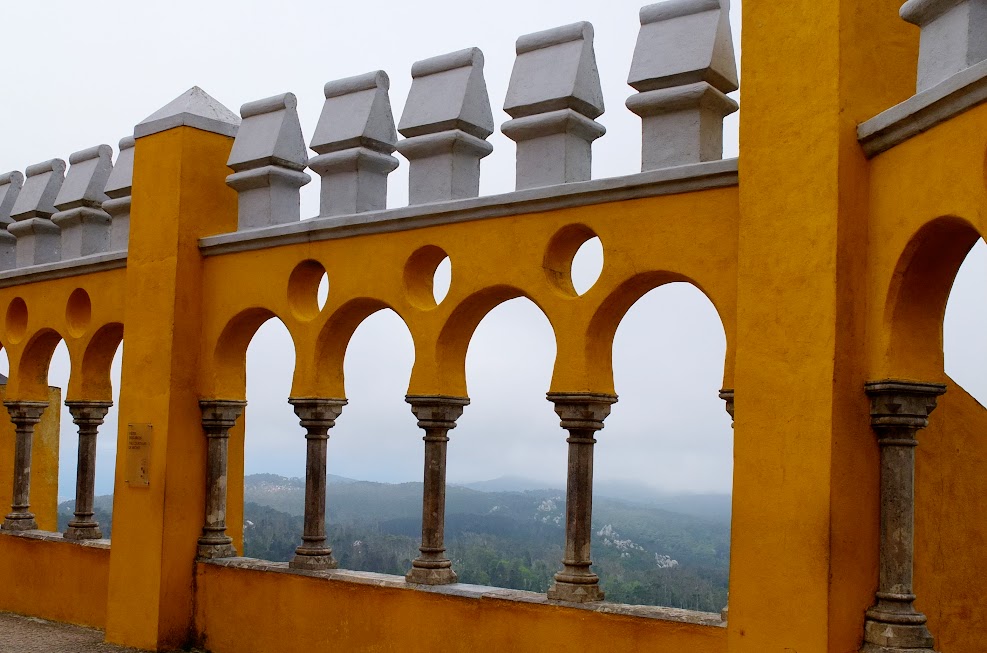 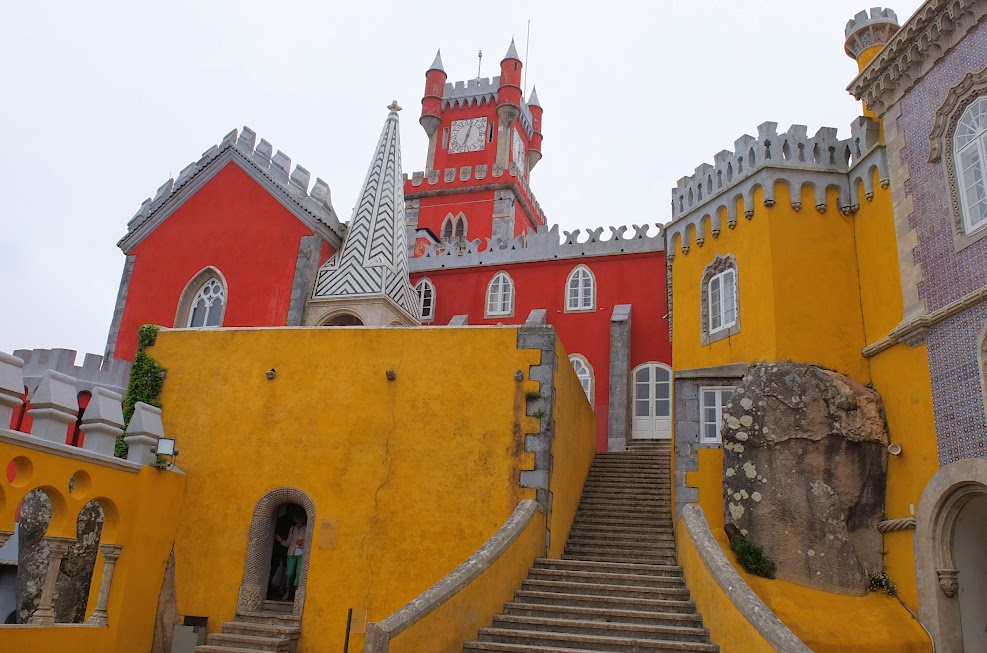 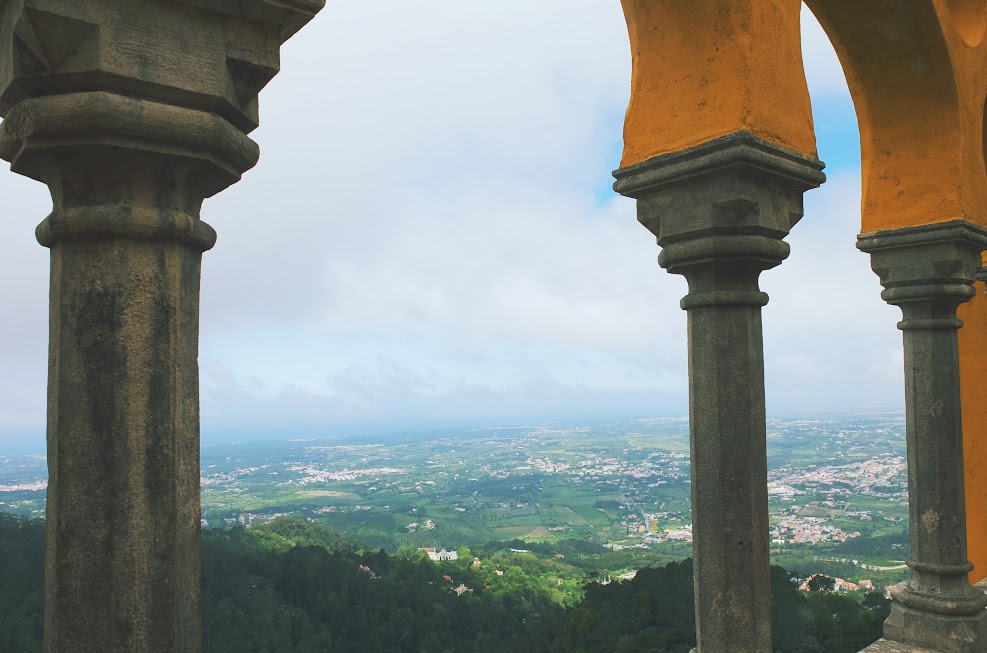 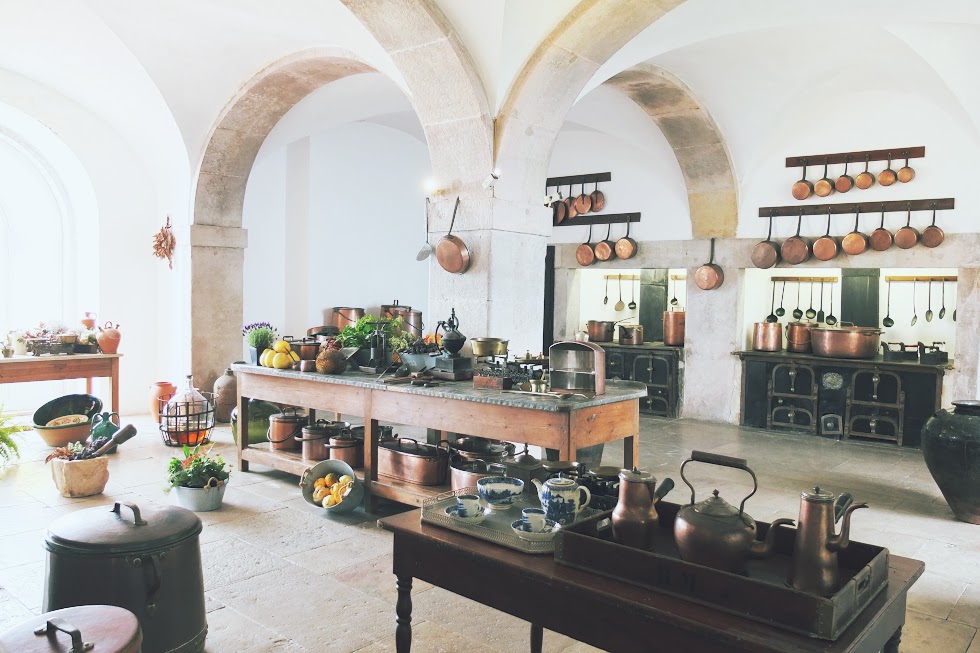 The gardens are vast and apparently most visitors don’t make it there. There are fern forests, hillsides of lavender, chapels, and a pool home to a pair of black swans. The humid nature causes moss to cover everything, making for a complete fairy tale forest experience. It may be touristy, but the Pena Palace deserves its reputation. 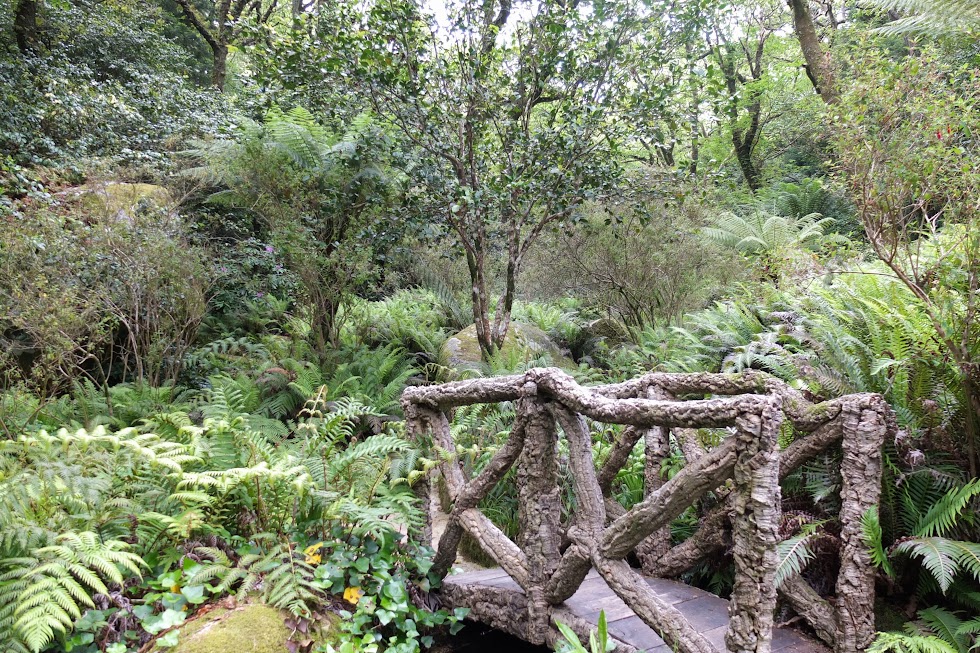 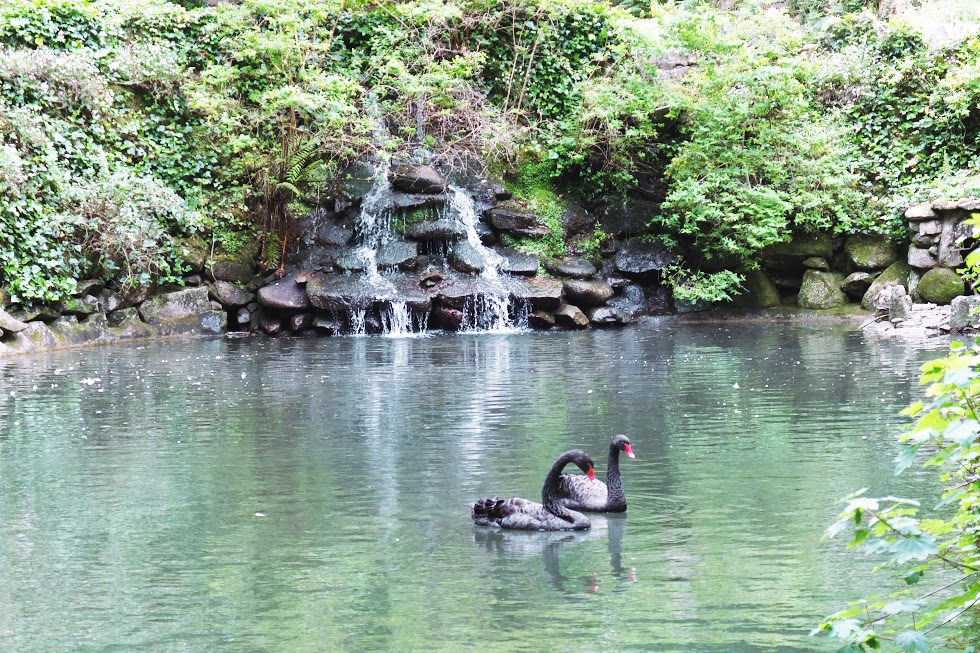 Arriving back in town, we walked from the bus station to the village itself. Sintra is a sweet albeit touristy town, filled with shops with trinkets and confections and quite the collection of restaurants. We rested for a while at Piriquita, home of the classic pastries made famous in Sintra and maker of a mean espresso duplo para mim. We didn’t linger in the town center; while sweet, the streets were crowded and we had a more unique destination in mind. 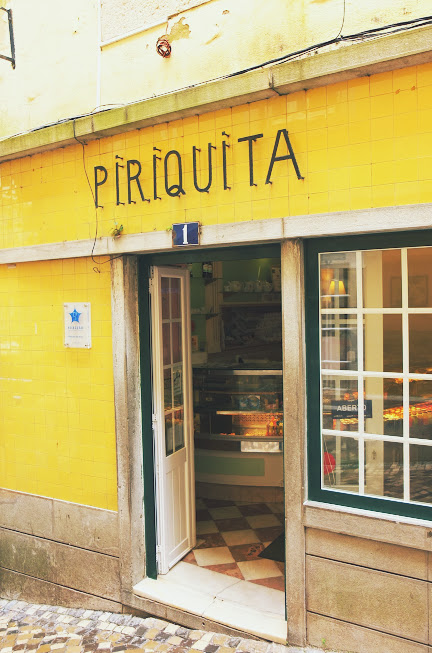 The Quinta da Regalia: the pinnacle of our jam-packed day. This place was so beautiful, so trippy that I never wanted to leave. Exhaustion was starting to set in at this point, but we pressed on and walked the short distance from town. The façade of the quinta is magnificent, though the grounds are what implant their ideas in your mind for months and perhaps longer to come. 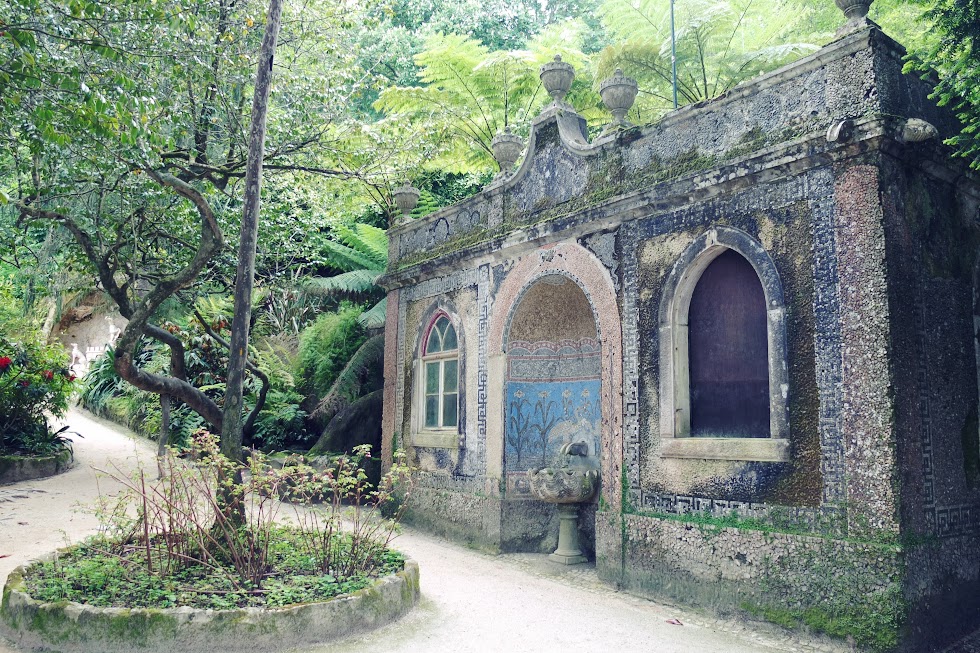 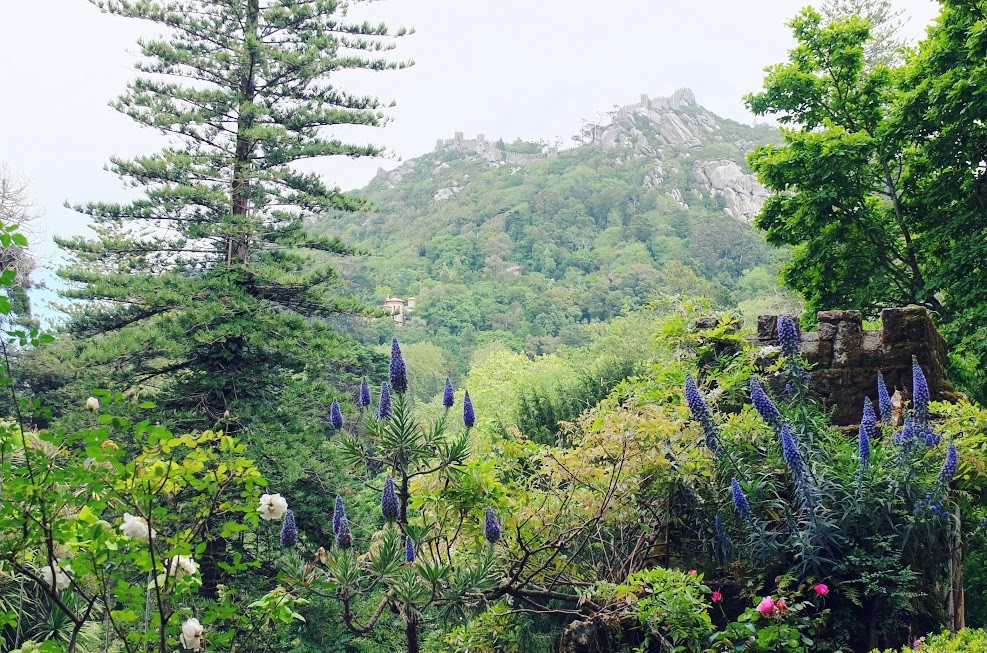 The story goes that a very wealthy man by the name of Carvalho Monteiro bought the quinta in the late-19th century. For years, he employed famous architect Luigi Manini to develop an experience within these grounds- a series of structures, grottos, tunnels and even wells all set up to expand your mind to feel this art…  And so we did. We wandered, we awed, we descended beneath the ground to an area marked grotto that ended up being pitch black, brought out our flashlight, and continued on through a rocky tunnel, at last appearing on the other side of the garden.

As to be expected, the Initiation Well was the highlight. Again, we descended, this time hopping on rocks to cross a pool before navigating the tunnel and arriving at the bottom of the well. Apparently, the well served as part of the initiation ceremony for the Knights Templar. It is suggested the well symbolizes the ascension from purgatory to heaven…or elsewhere, as once at the top you must make a choice: which way? I know what you’re thinking…What if I make the wrong choice?! Out you come, from what appears to be a cave, and you arrive at the top of the hill with a view of the property below. 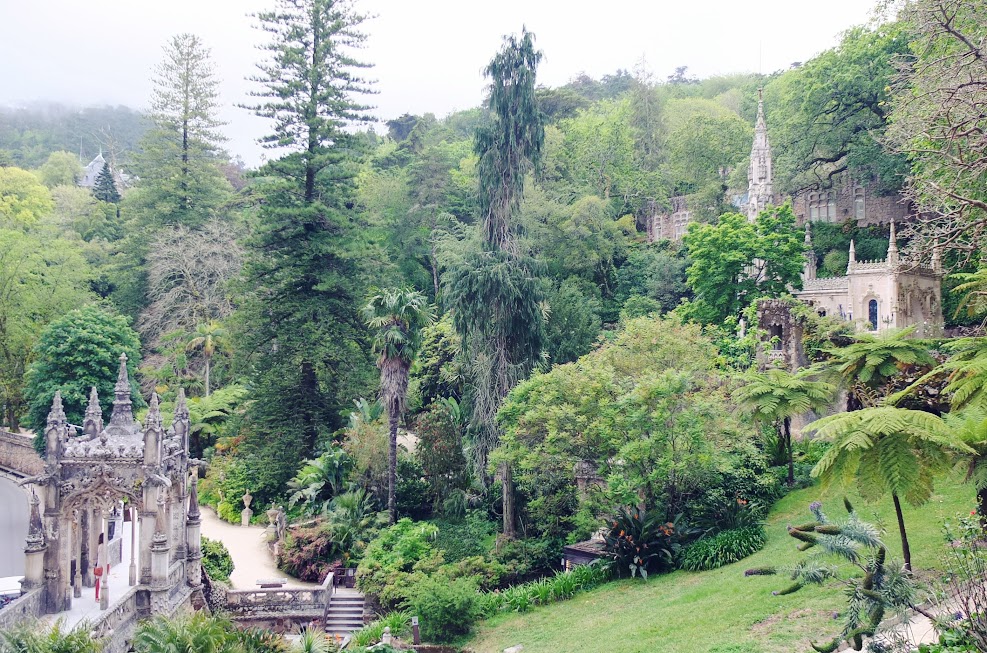 Exhausted, satisfied, thrilled, and a little bit confused over what we just experienced, we boarded our bus “home.” We somehow willed ourselves into town and I reported to my trusted butcher. I asked a young man next to me to help me order. After a tango of trying to convey my plea for a lamb chop—unsuccessful, though I ended up with veal so all was not lost, we got to talking. When he learned I was from Philadelphia he connected it not to Rocky, the Liberty Bell, or any of the other typical associations, but instead, “Philly! Love Park!” As it was, he was a skateboarder and it is (was- they tore it down) home to a village of skaters and particular famous in the skating world it seems. 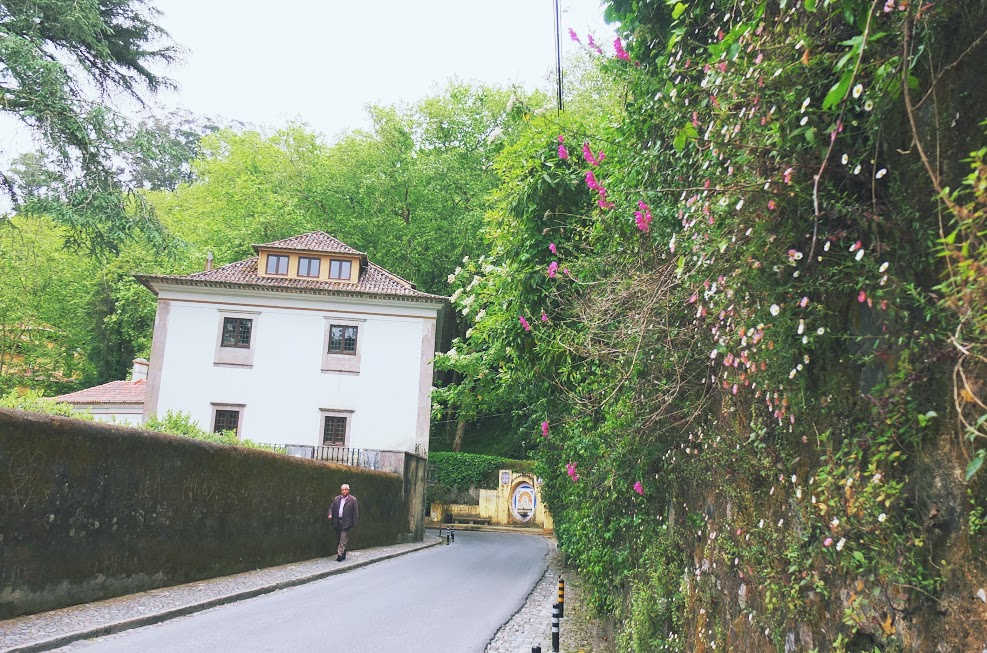 After the day we had I was reminded so simply and directly that often, the collage of visited will likely not the most memorable part of your trip. Instead, it’s exchanges like these, personal connections, that really imprint a place or experience in your mind, even just a bit. 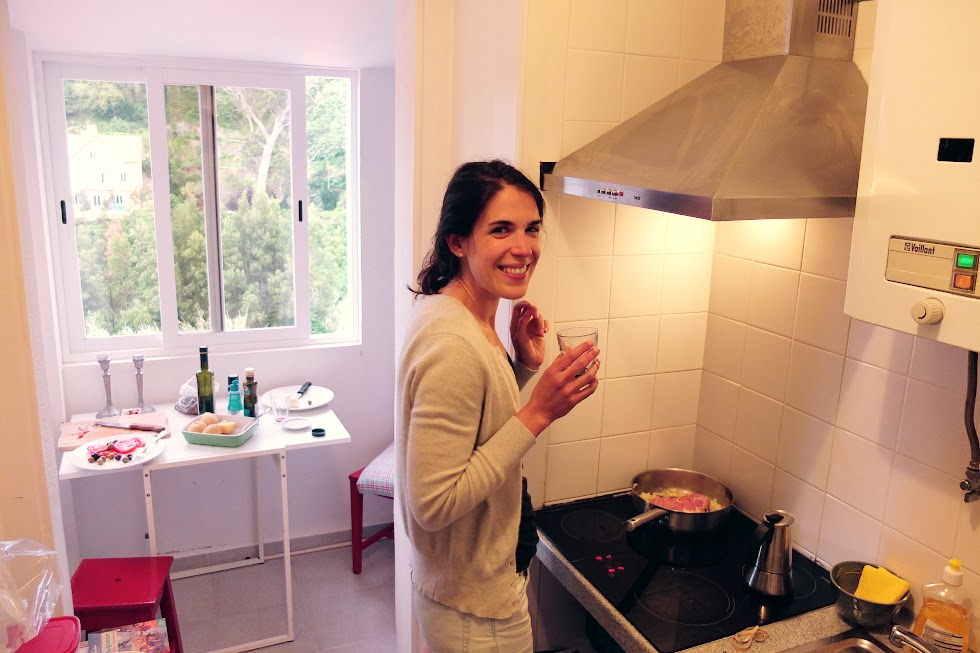