May 26, 2015—The sun washed over the mountains at the rear of the house as we prepared for our day trip to the west side of the island. We lingered just a few more minutes to see the full spectacle. 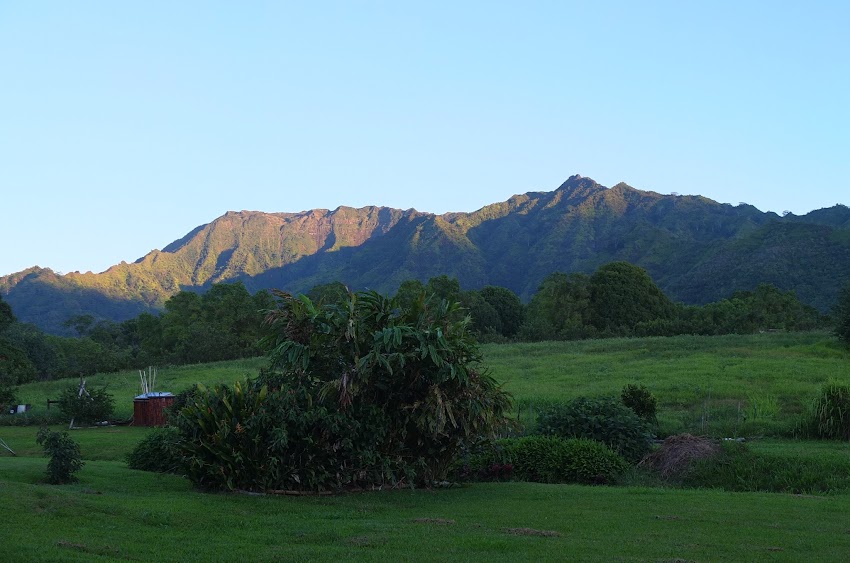 We continued south then west, stopping to fill the tank with gas as recommended, then took a right up towards Waimea Canyon. The journey was a gem in and of itself-the first look at Niihau Island from above and the ever-changing environment was a delight. After miles and miles of steep climbs and sudden turns and hunter trails that looked like they might be roads, we arrived at the Waimea Canyon. Before any other visitors arrived, we were gifted the rare opportunity to marvel at it all—the diversity of the colors, the drama, the bug-like helicopters swooping over the waterfalls. 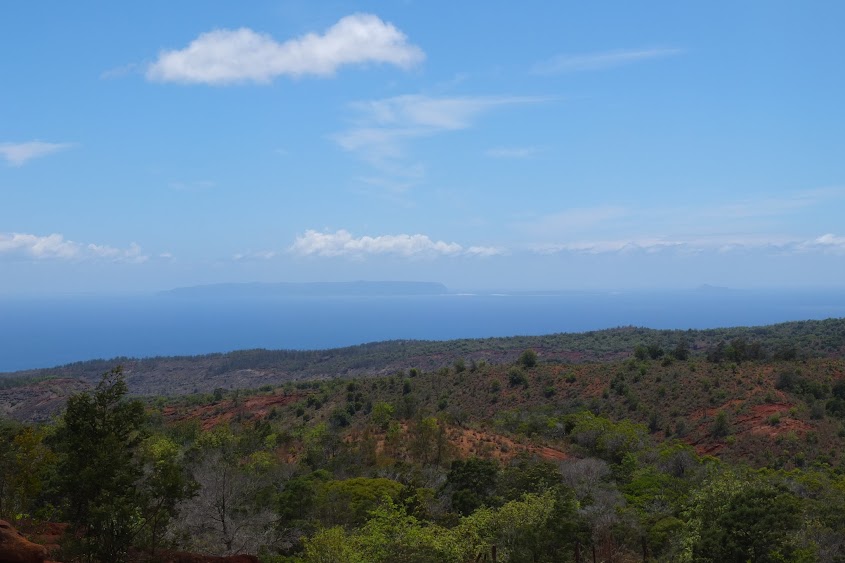 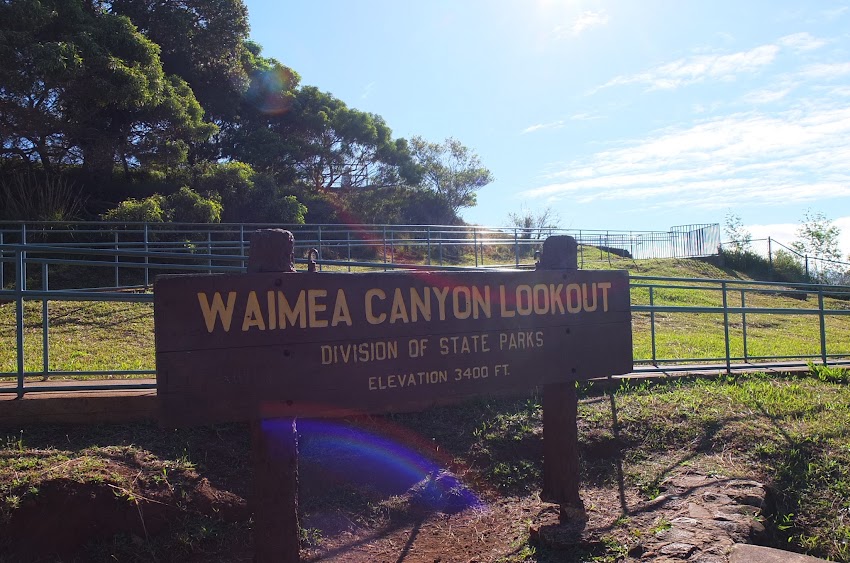 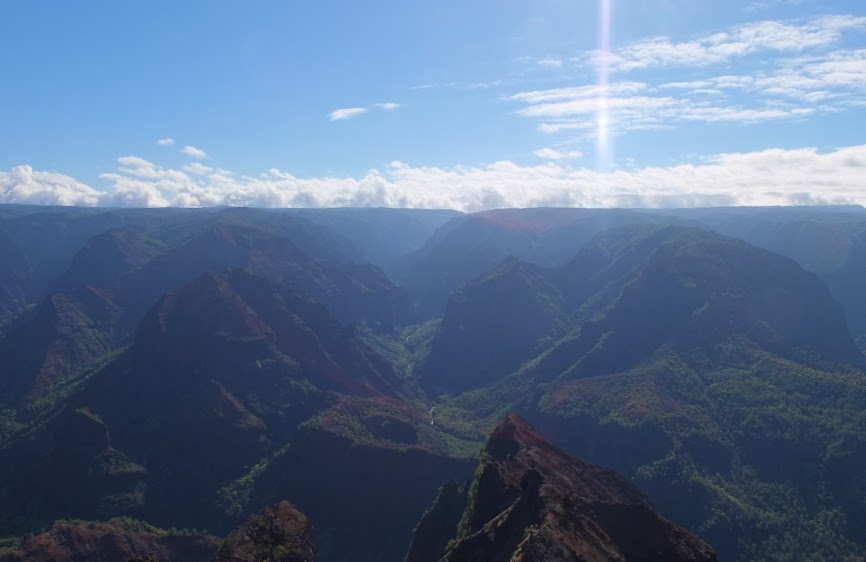 The sun rose higher as we continued the climb to the end of the road, the Pu’u o Kila lookout. We passed through the entrance of Kokee State Park and noticed the NASA laboratory on the other side of the street. It was much colder up here in the rainforest at an altitude of 4,000 ft. We laced up our sneakers and were thankfully parked next to a woman headed down the same trail as us, the Pihea / Alakai Swamp Trail. Steps away from the car and I was already leading us in the wrong direction. Thankfully, she set us straight.

The trail became muddy fast, but that didn’t deter us. It is, as the sign dictates, one of the wettest spots on Earth. Only minutes in and we looked to our left to see the most beautiful, precious and unspoiled scene I’ve ever witnessed. The Kalalau Valley lay before us like the most generous gift. We gawked at it for a while, then a little more due to my instance. I was thankful for the time as we wouldn’t get a repeat. 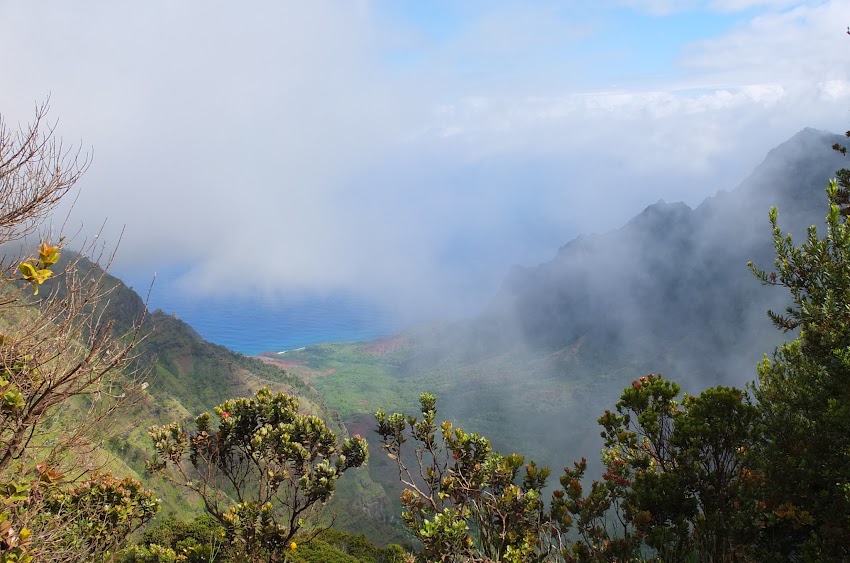 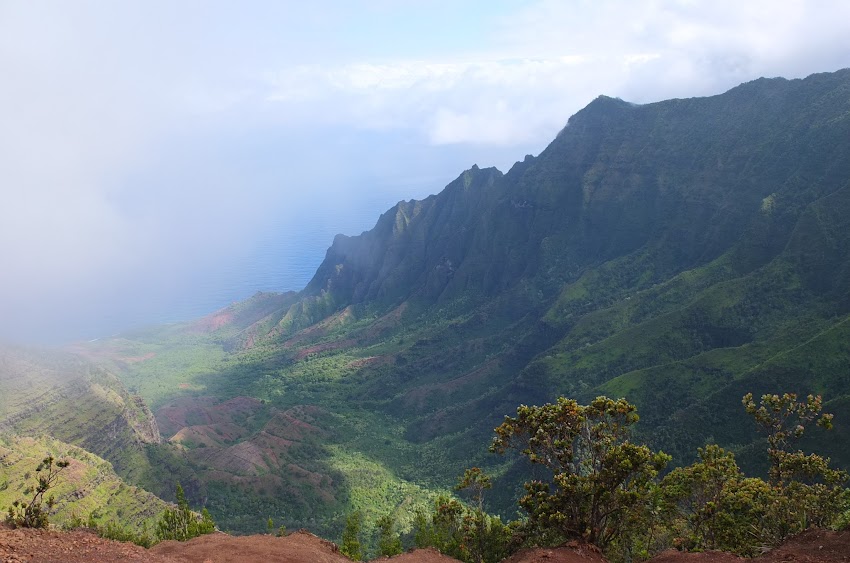 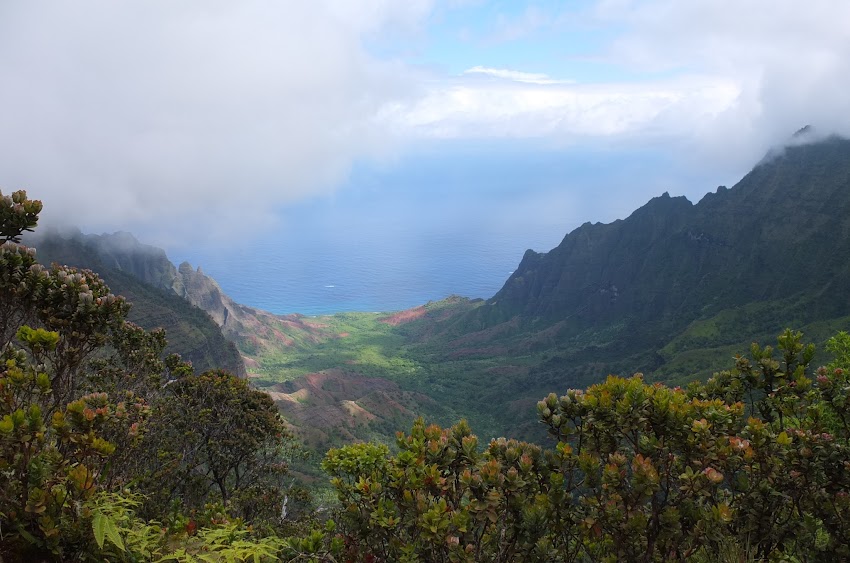 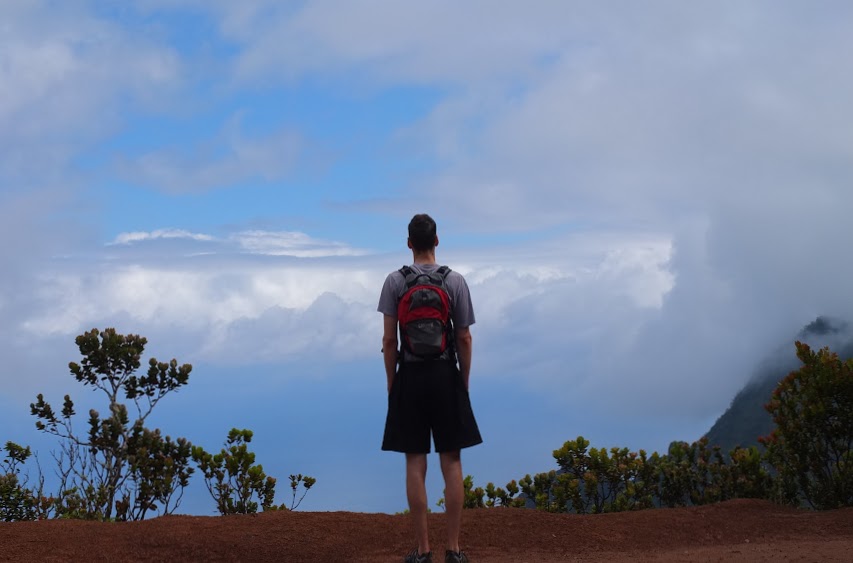 The trail was an adventure through so many different environments—a journey through muddy trails, pristine rainforest and stark desert. Within the swamp existed plant life that appeared, dare I say it, prehistoric? The ferns were developing at an almost visible rate and we were privy to it. At the end of the Pihea trail (where you must turn right to stay on it) we ventured up the path to the lookout, but by now the view was entirely invaded by clouds. While disappointing to miss the valley from this well-earned angle, the blank view was something to behold. It was like being in the place described as “heaven”. 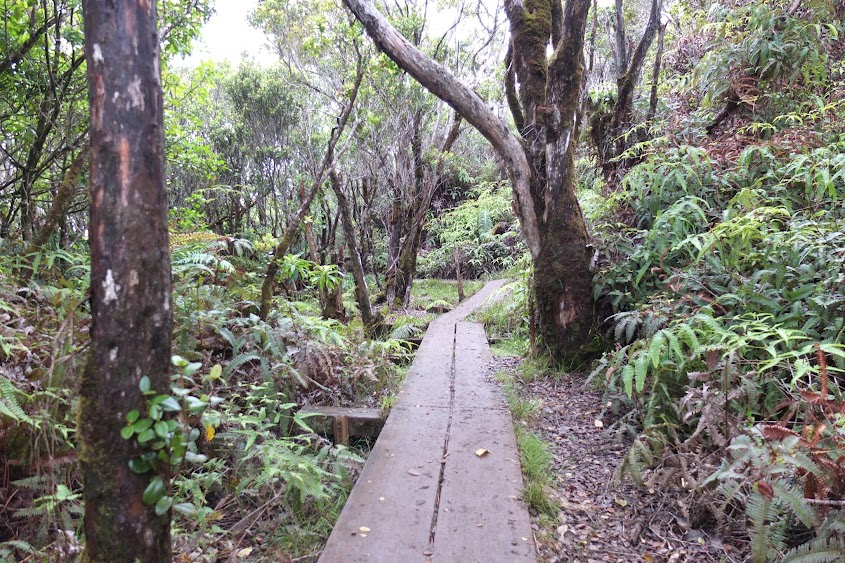 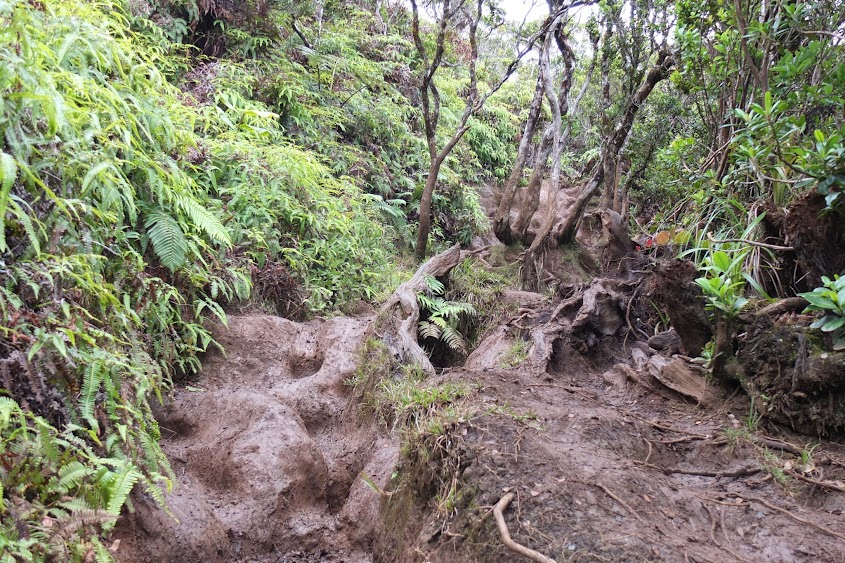 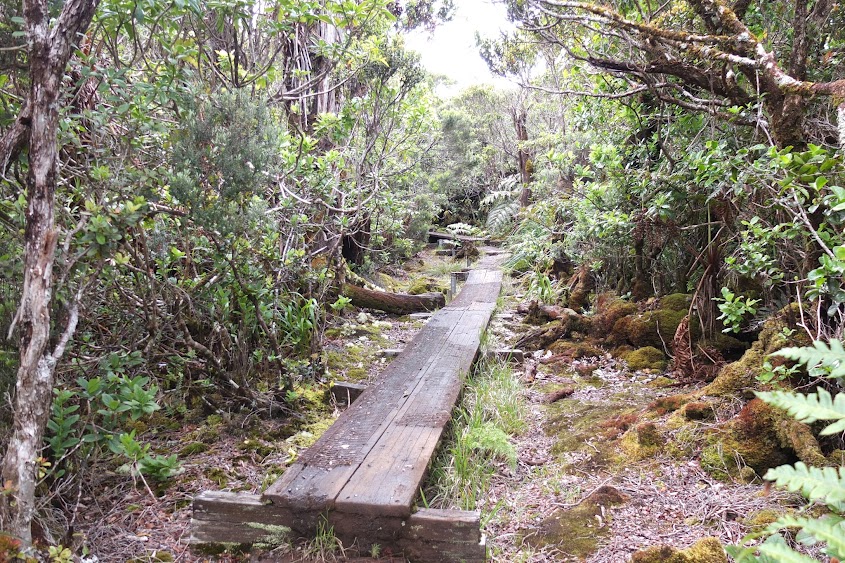 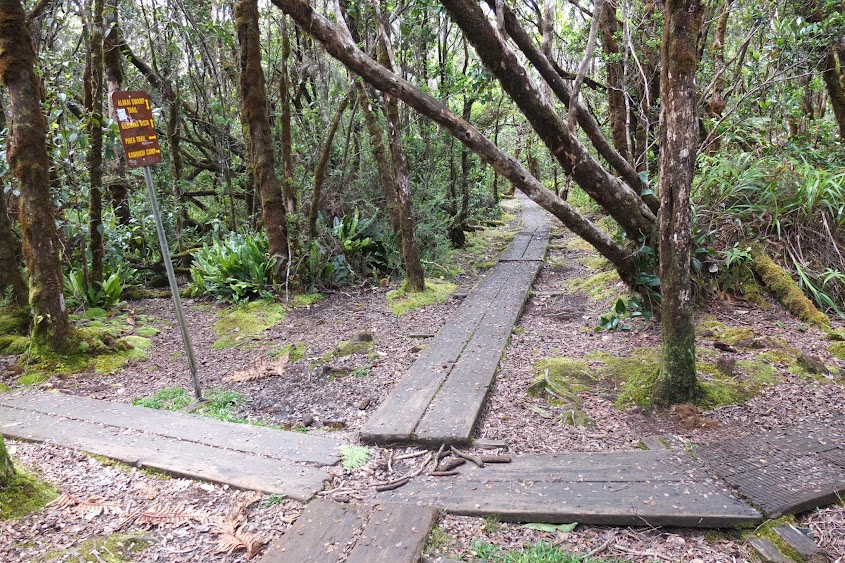 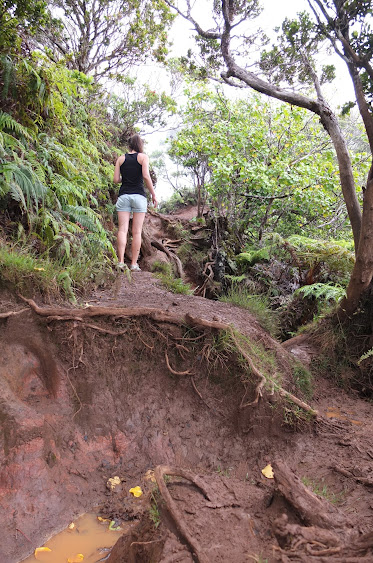 After wandering to the crossroads with the Alakai Trail, we continued straight for a while before beginning the somewhat treacherous journey back. While the swamp itself was covered by “boardwalk”, the planks were more balancing act than leisurely stroll.

By now the trail had reached a level of difficulty that had me considering removing my shoes for traction. While frustrating at times, the adventure of it all had a hold on me. The surrounding area was covered in moss and diverse varieties of trees and flower and even wild ginger. At every steep pass requiring strategy and a bit of grace to navigate, I brought my attention to the layers upon layers of different colored Earth that made up the mud. 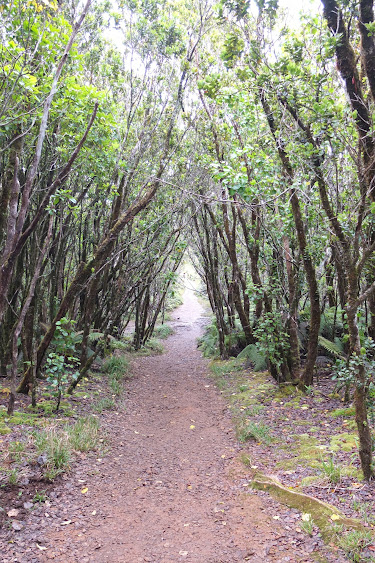 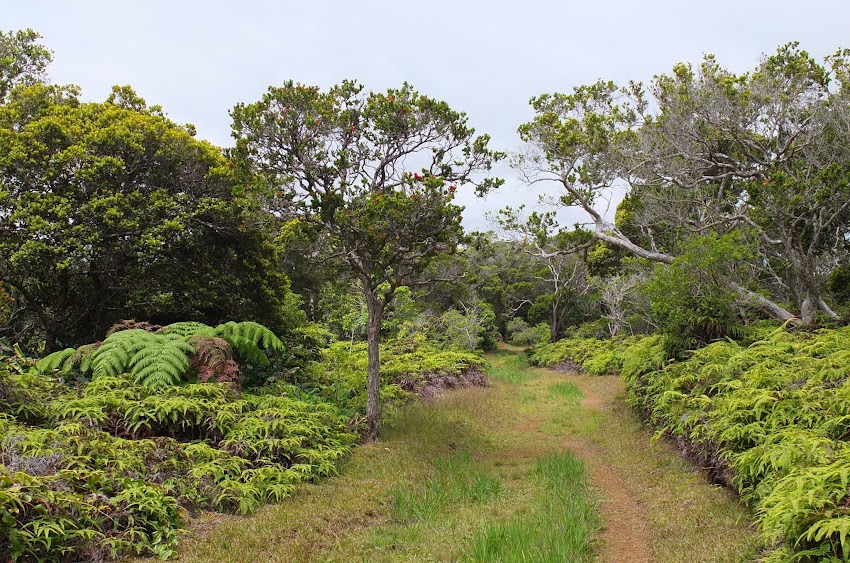 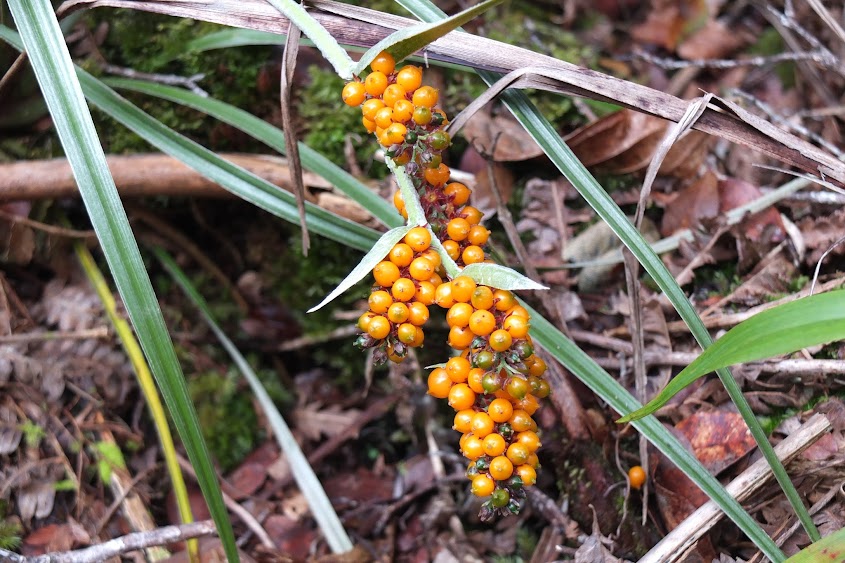 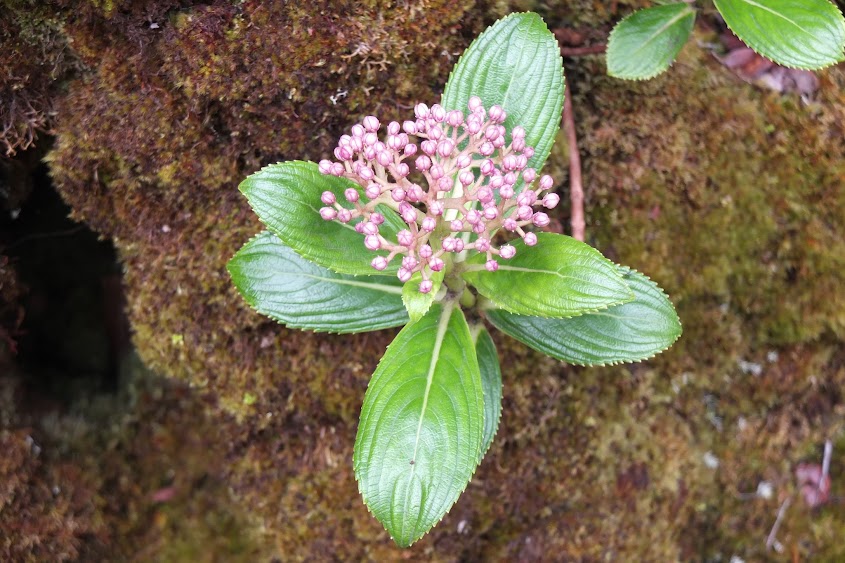 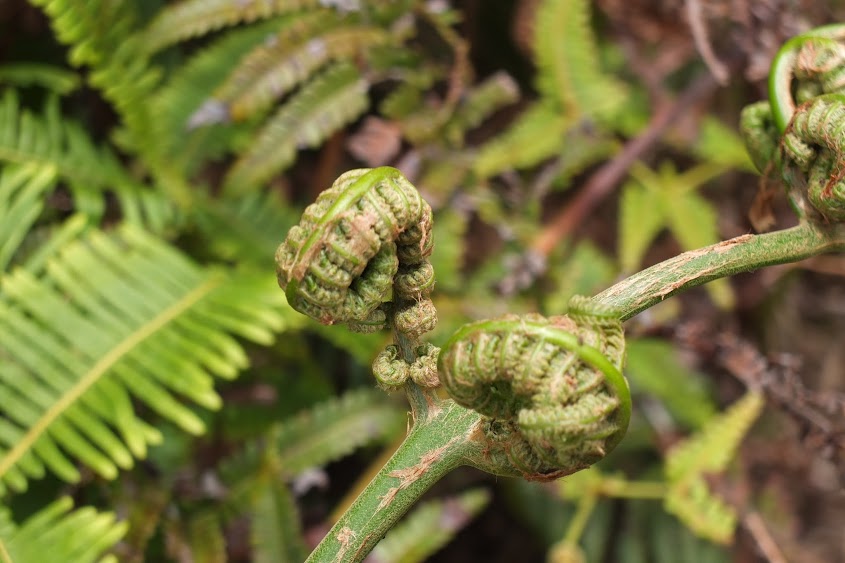 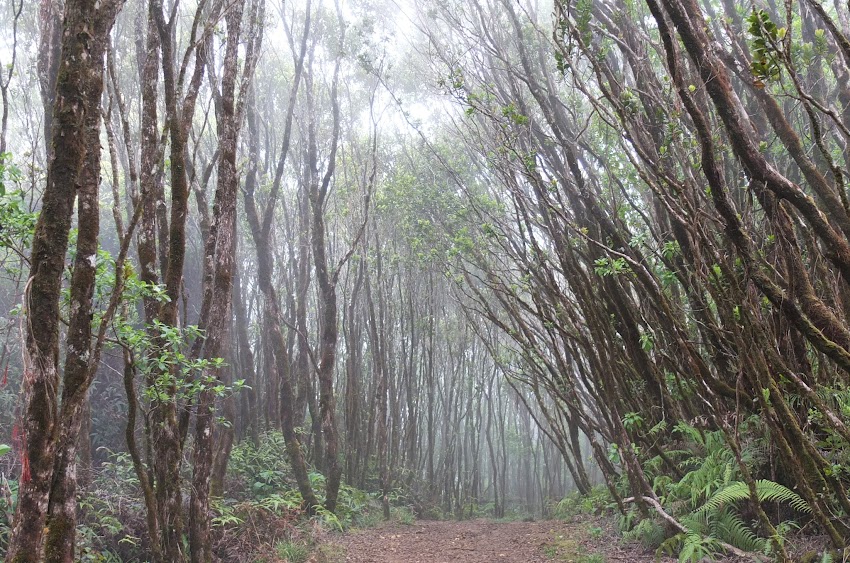 Once back at the overlook we found ourselves in the midst of the clouds still. It hadn’t lifted. We’d been incredibly fortunate to arrive when we did. Others were not so lucky and their faces showed it. Did you get a picture? One asked…as if I’d spotted a mystical creature. I guess it was sort of mystical. 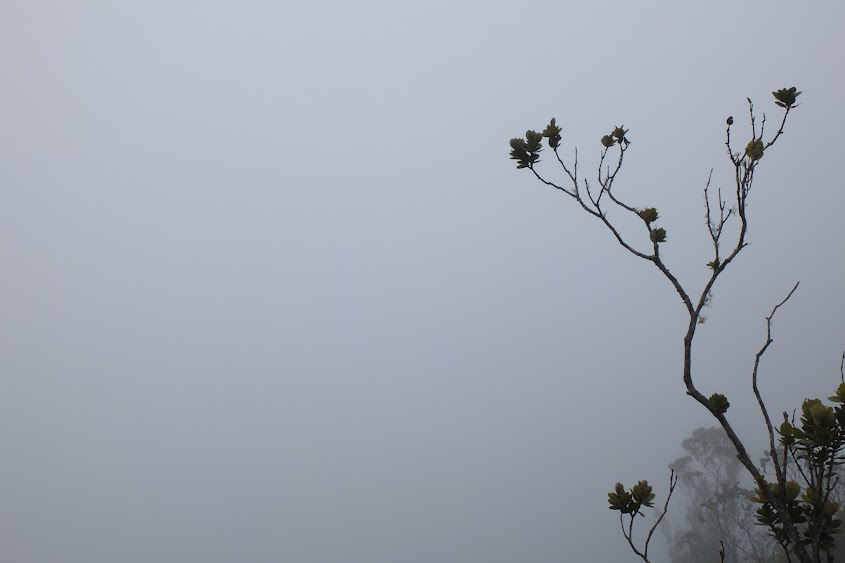 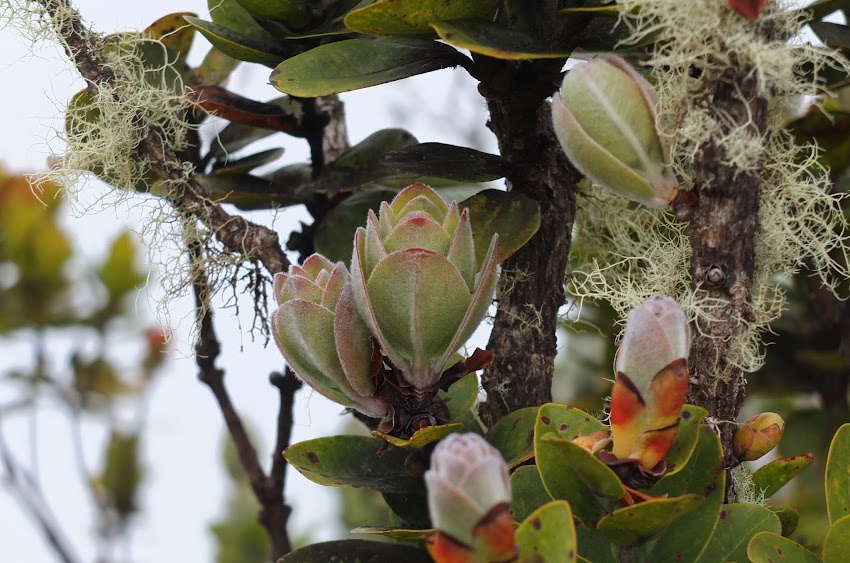 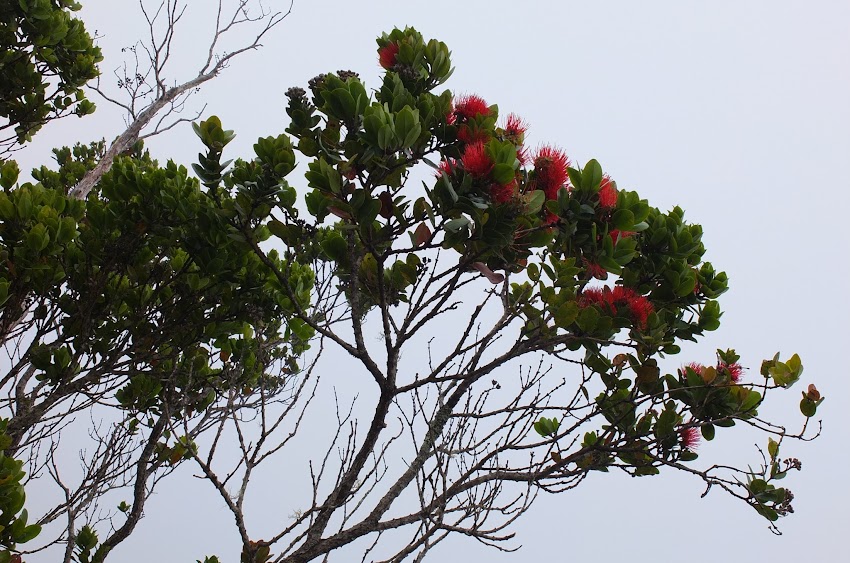 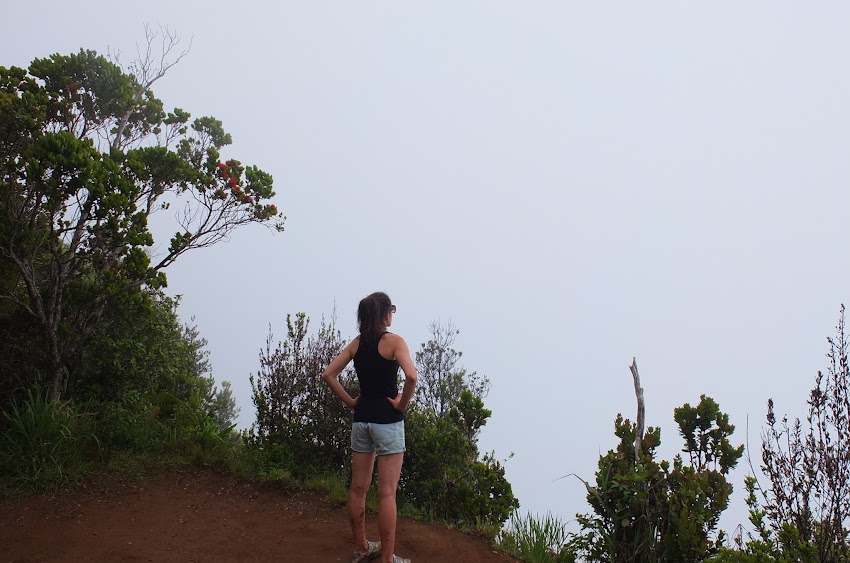 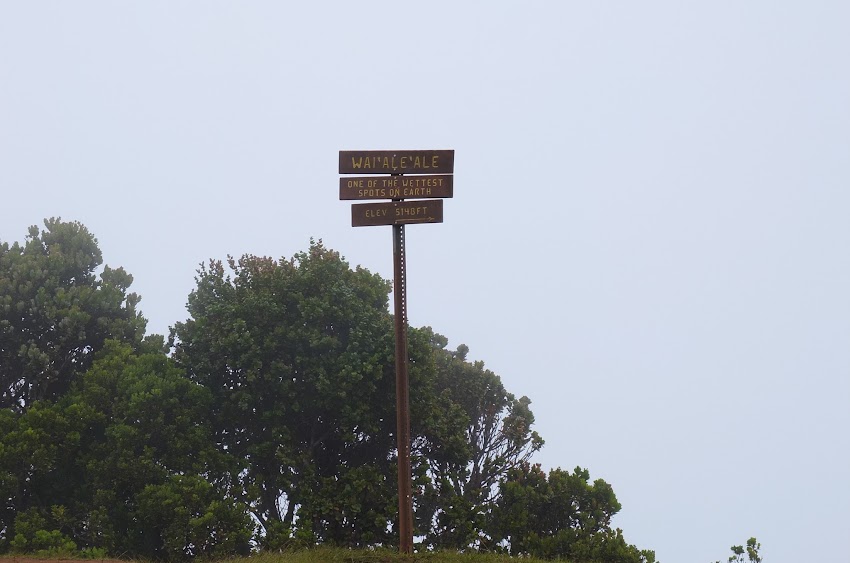 We found a picnic area near the Canyon where we had our lunch and the clouds hid that view too. We continued down the winding road and began a bit of a beach hop along the south shore complimented by a stop-off for poke (pronounced poh-kay).

After a quick dip at Salt Pond Park in Hanapepe (calm waters and a perfect spot to cool off in, but perhaps not the most atmospheric), we stopped at Sea Glass Beach—the beach that is at times covered in sea glass depending on the tide—before ending at Poipu Beach. In between, we ended up at Koloa Fish Market and I devoured a combination of a classic poke and avocado over rice. It was really, really good. We walked the main thoroughfare of Koloa with its sweet shops, before returning to the coast. 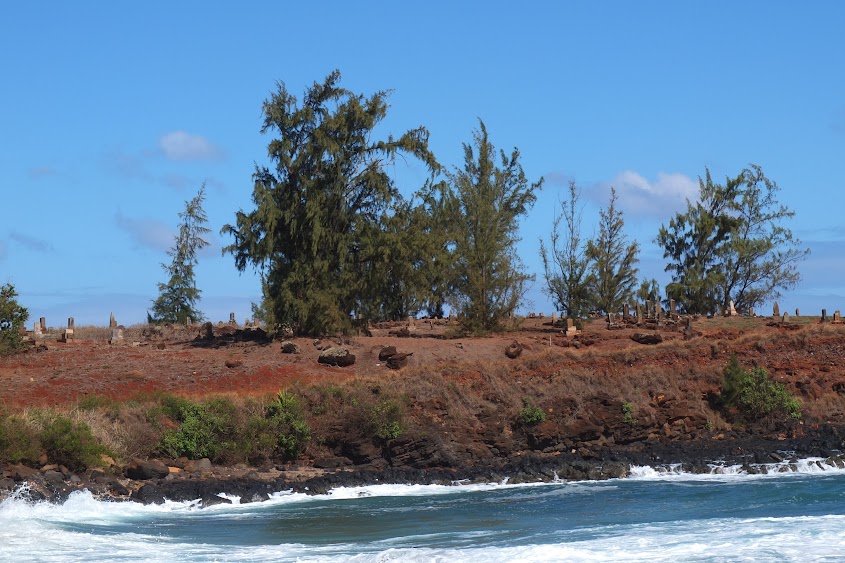 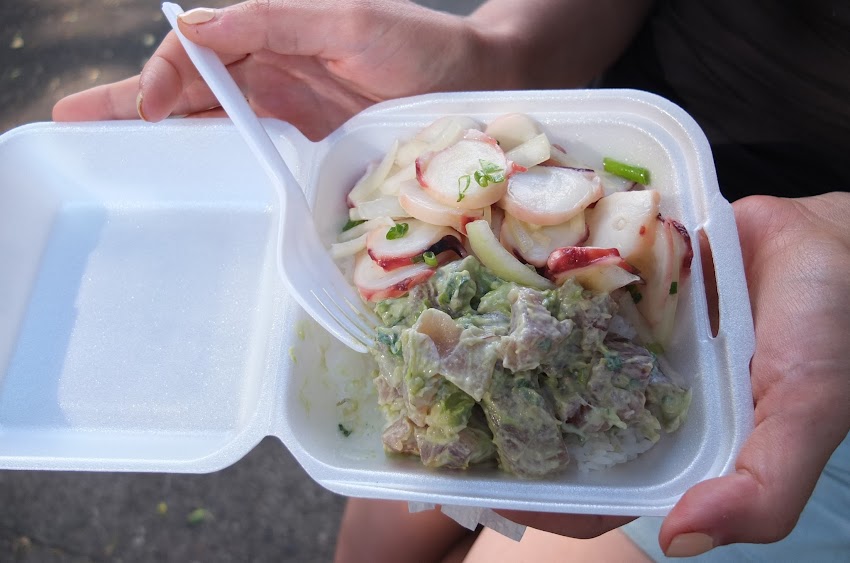 Poipu Beach was more crowded than the beaches we’d been visiting, however it gave us a precious last couple of hours of light and reefs that were bursting with life. The current was picking up as I followed the schools of fish with the ebb and flow of the sea. A band played nearby. 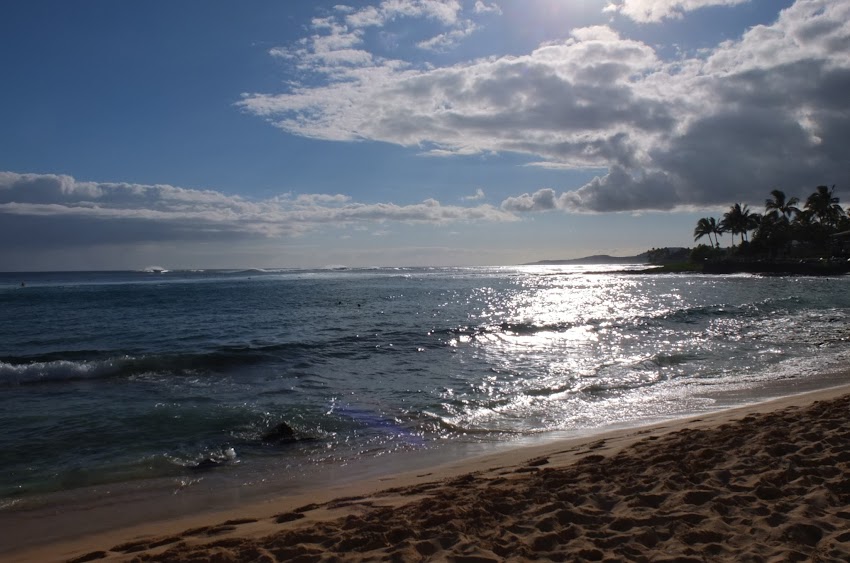 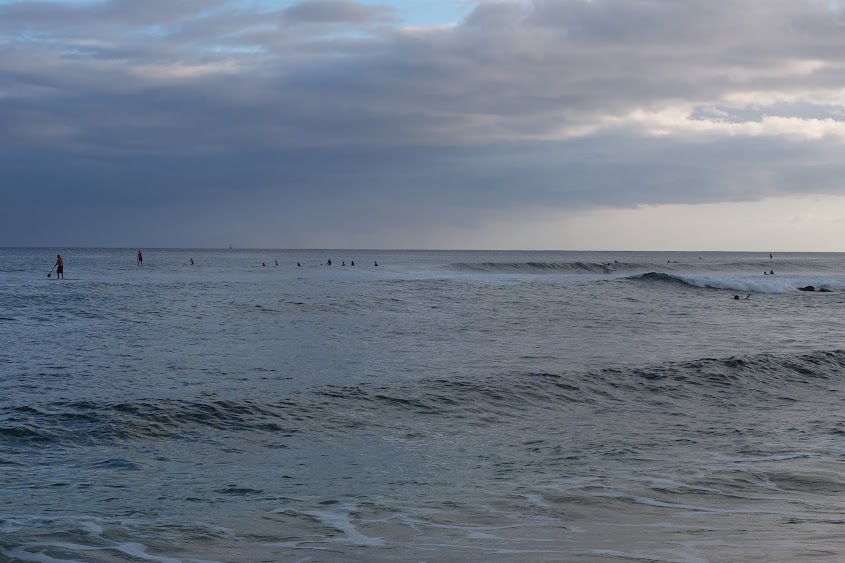 Before returning to the bed and coffee, Luke was in the market for classic Hawaiian food. Arriving only twenty minutes before closing at Mark’s Place in an industrial area of Lihu’e, I expected we’d be out of luck. Not so, there was a line and we joined it. The offerings at this time of night (there are specials and bento boxes during the day) ranged from Loco Moco to Chicken Katsu. L got the mixed plate and we settled in at the picnic tables out front with the other patrons who also made it just in time to chow down at the most popular spot for Hawaiian comfort food on the island.

Pihea/ Alakai Swamp Trail
This is another trail that was recommended by both the book and the boat captain. It was a total trip and one of the highlights of ours. It was certainly physically demanding as it required a steady up and down-hill climb of very, very muddy trails with limited footholds. If there’s been a heavy rain I’d say beware; it was hard enough to make it through under normal conditions. The entire trail is 9 miles, but we cut it short. You can easily adjust it for your preferences. Bring lots of water, snacks, sunscreen and layers (mostly layers you don’t care about. Those “red dirt shirts? Made with mud from here!)… as you can see, the environment is quite unpredictable.

General Advice for Kokee/Waimea:
Bring food and water. There is only a small lodge in Kokee, so it’s worthwhile to plan ahead. Also, fuel-up before making that turn into Waimea; it’s a long (about 40 miles or so) hilly round-trip journey on which there are no gas stations. Oh, and get there early!