May 24, 2015–This trail was declared a must for us (by me) before we even arrived on Kauai. The iconic views and the feel of it, told by the words of those who walked it or even lived it before. Remember Tom and his stories of Kalalau? While we only got a glimpse of it (2 miles of the 9 mile Kalalau Trail), the pleasure of it can’t be overstated.

To do the trail in its entirely requires an overnight stay for us mere mortals, so we decided instead to hike the two miles to Hanakapiai Beach then two miles to reach the falls. It was a bit ambitious, but we were happy and determined.

We arrived at Ke’e beach and were lucky to find parking steps from the trail head. Later, we saw cars lining the road to Ke’e, in addition to filling parking lots a distance away. We brought two gallons of water with us, in addition to lunch, snacks, and a camera. We saw hikers outfitted in much more official attire than us and barefooted people and people actually running the trail. Would you believe it if I told you we saw the same guy running Kalalau that we saw on Sleeping Giant the day before? Bizarre—the size of the island and this guy’s endurance. 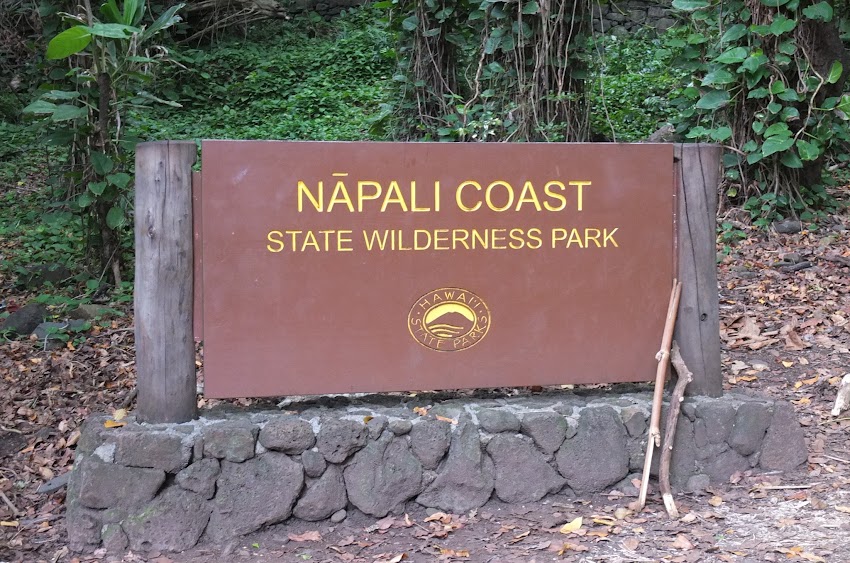 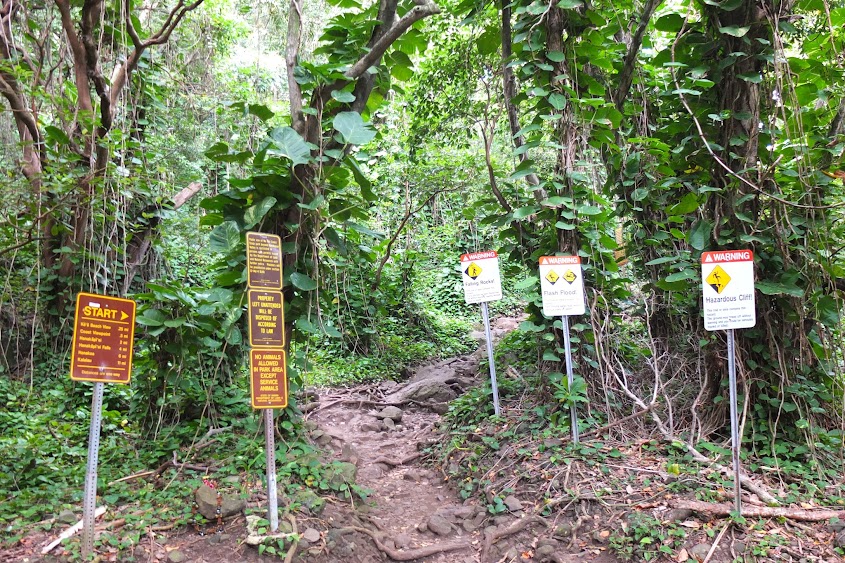 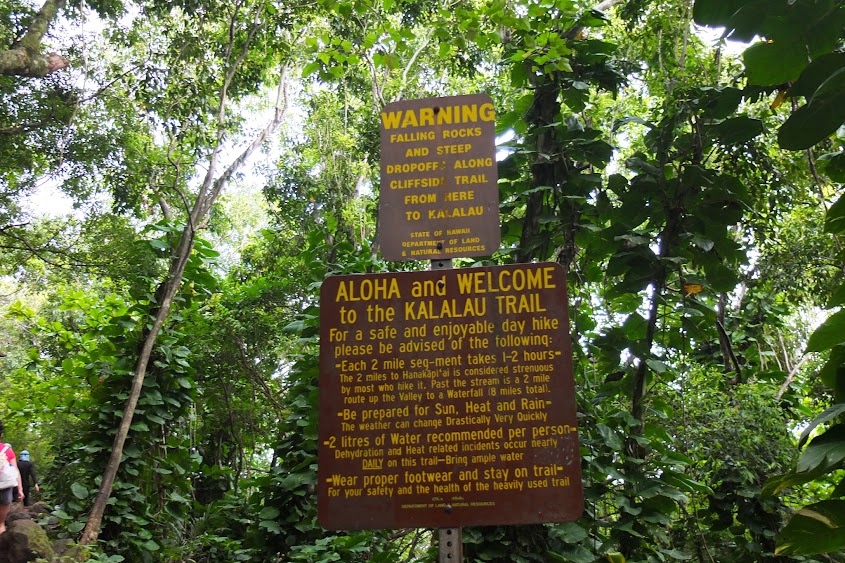 The hike to Hanakapiai Beach was incredibly scenic. It took us a bit of time, as we stopped here and there for photos, but the trail itself was well-maintained and not overly strenuous to navigate. After a few stream crossings and narrow passes that made my stomach lurch, we arrived at the first of several river crossings to reach the beach. This time, we followed suit and hopped across the rocks. Several people fell in (not very dramatically) others took their shoes off to cross the sort of raging stream. I’ll tell you, the crowds started picking up and many seemed in a bit of a hurry; this is not to be acknowledged as it lessens your chances of a successful crossing dramatically . 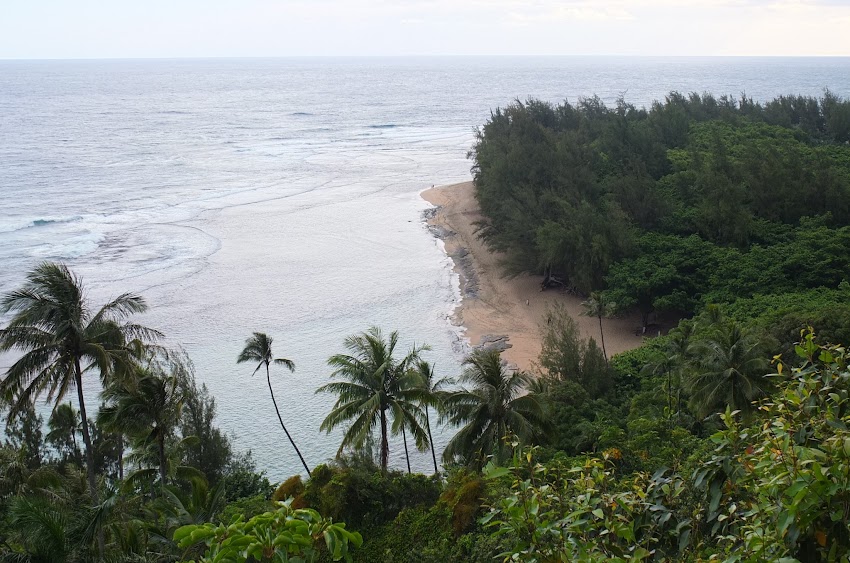 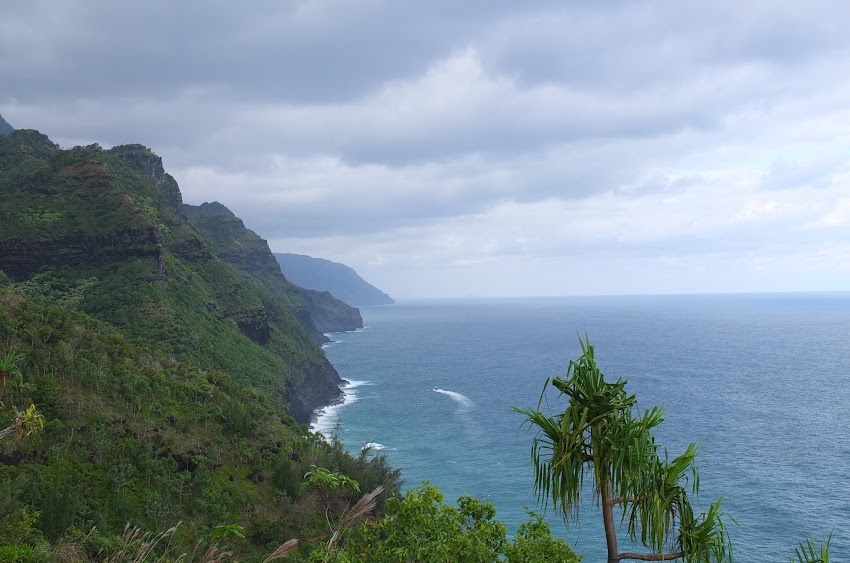 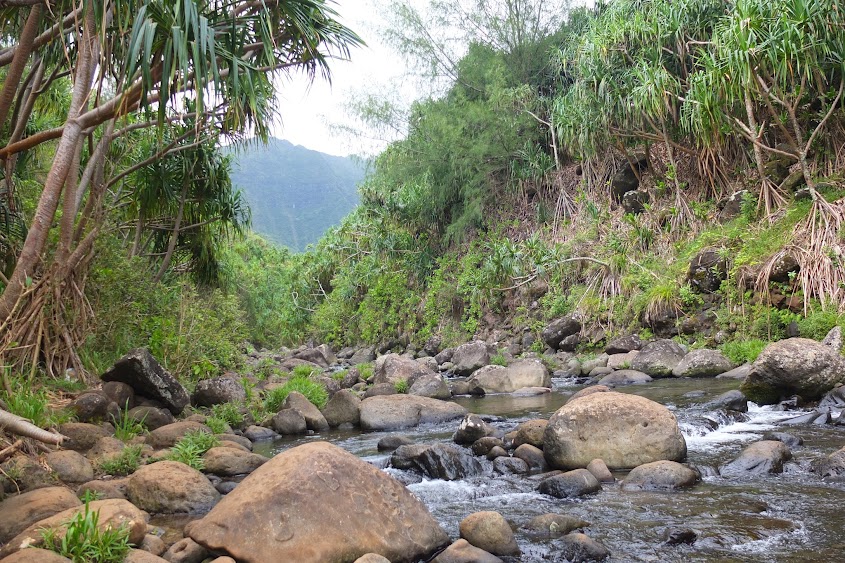 Hanakapiai Beach—overwhelmingly inviting and overwhelmingly deadly. The signs with markings indicating drownings are to be heeded, but many feel untouchable at this beach. We took a walk around, admiring its power, and headed inland towards the falls. 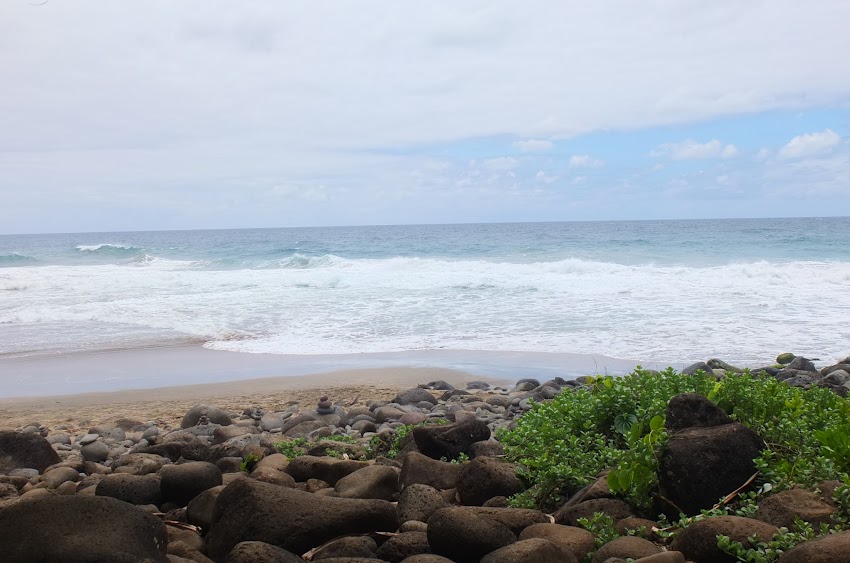 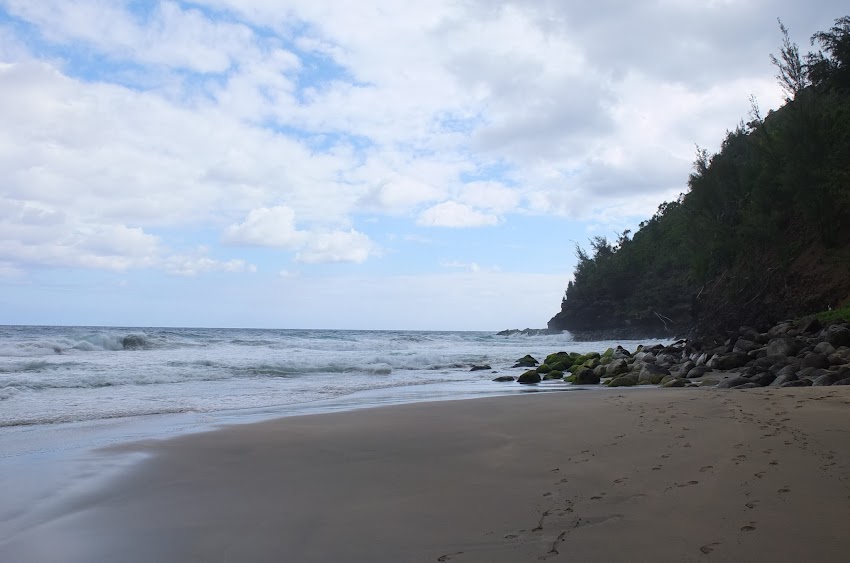 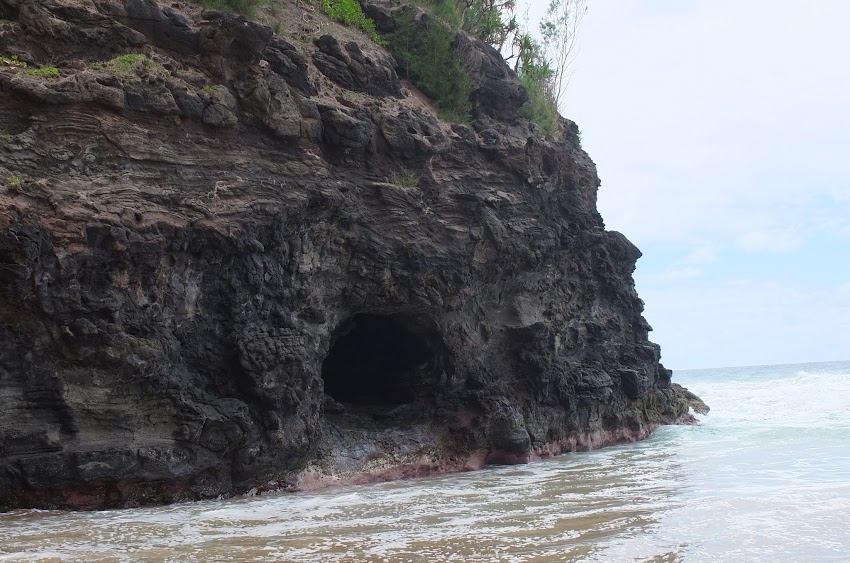 While the first leg (Kalalau) was a bit crowded, this leg was far better (at least in this direction). We passed through a bamboo forest and continued on through the rainforest. We zig-zagged across the river from before, some passes far more challenging and requiring more strategy and balance than others. Don’t rush—on the way back I did and whoop in I went! It was a lengthy two miles. Towards the end the trail narrowed and became far muddier. We teetered on the edge of the rocks and ducked back as others passed. At long last, we could hear the falls in the distance. A hiker on the return trip encouraged us you’re almost there! And at last, we were. 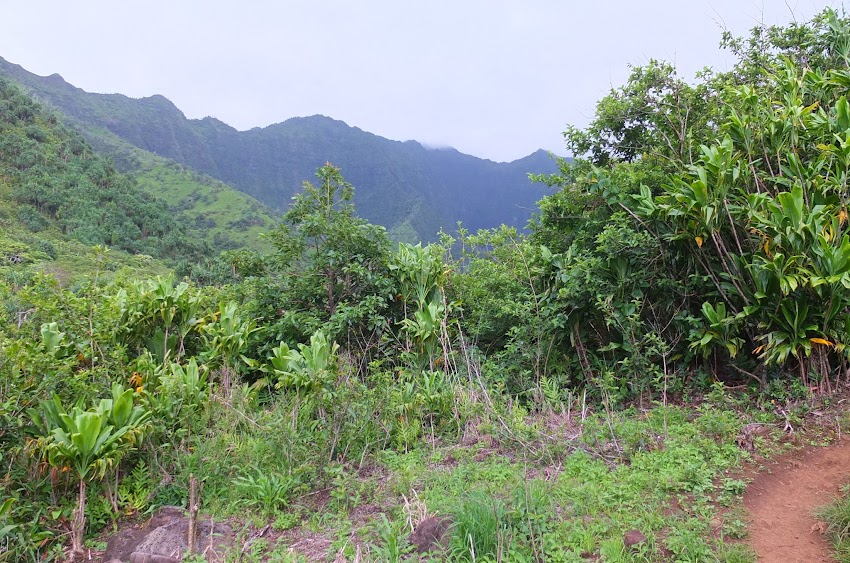 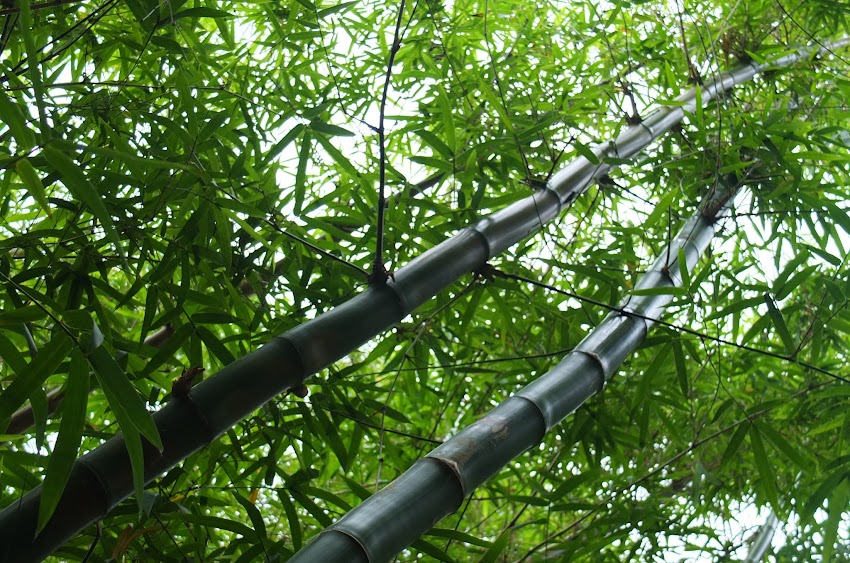 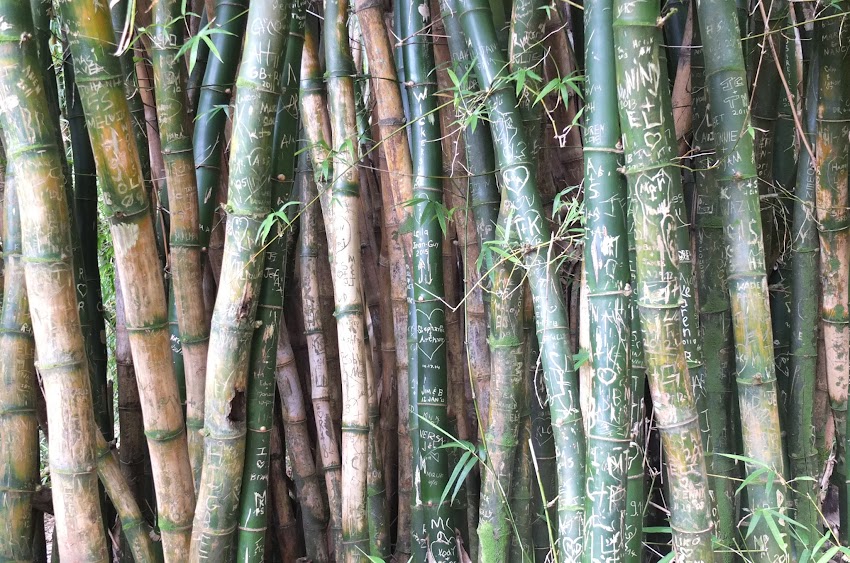 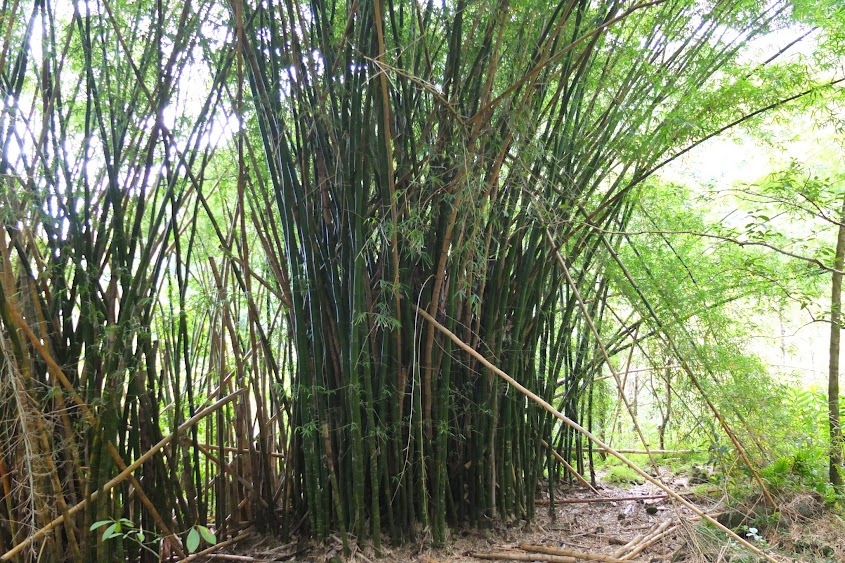 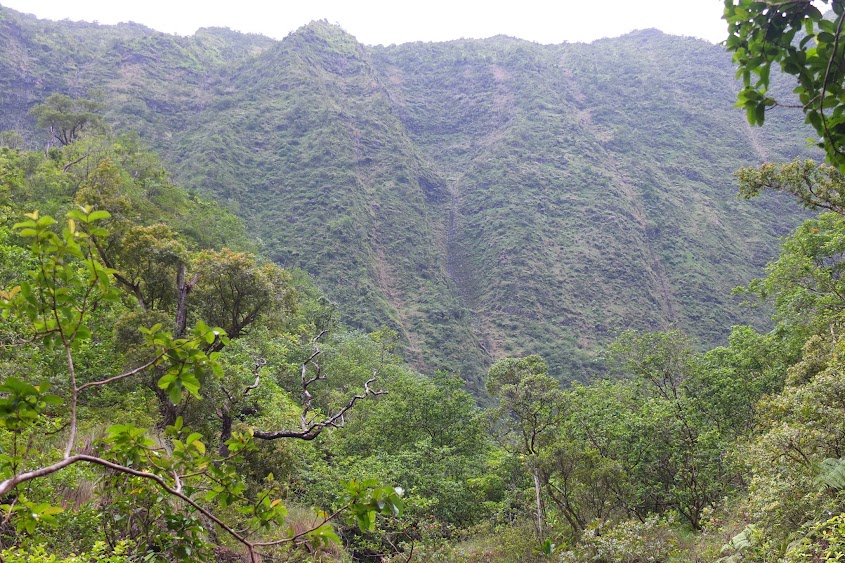 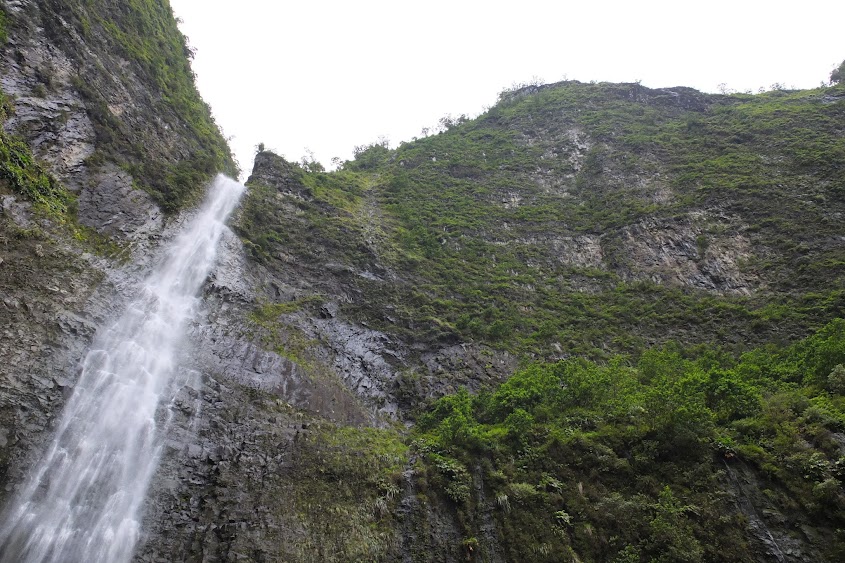 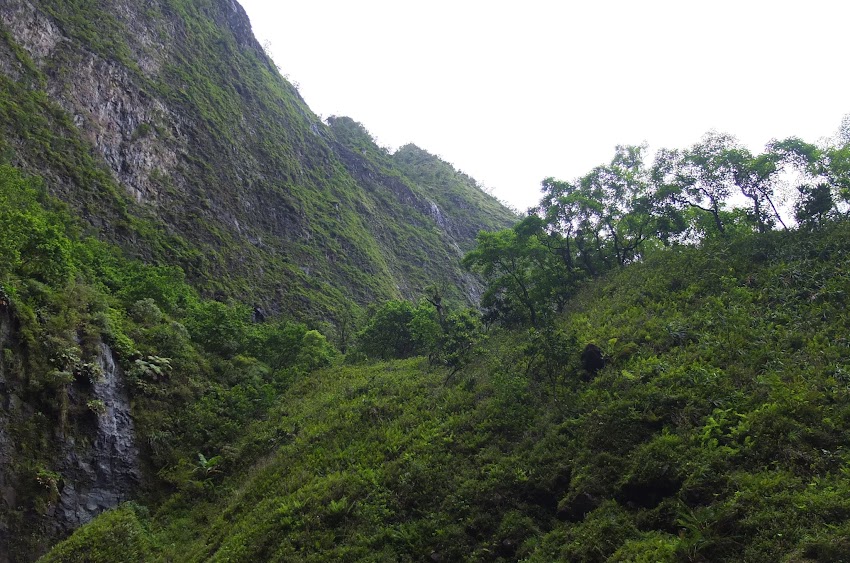 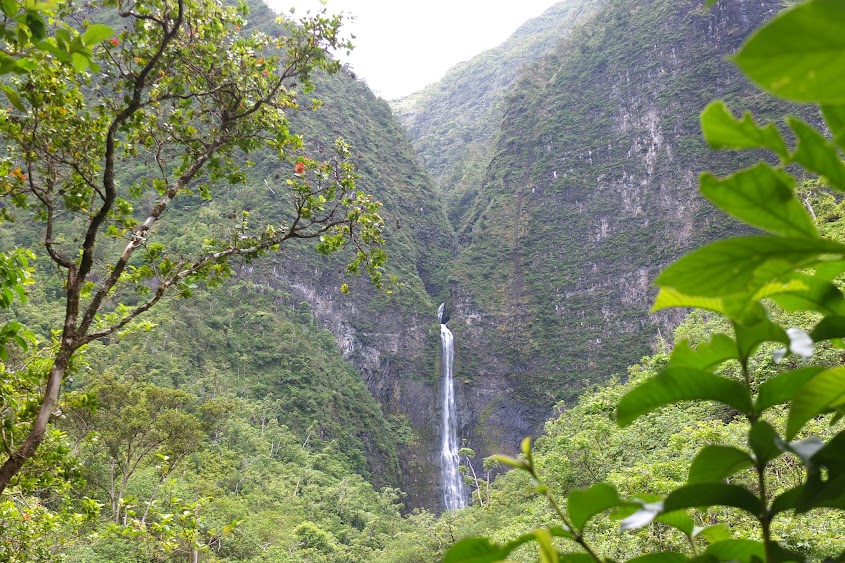 The falls are worth every step. The towering cliffs surround you, birds soar and swoop, and all is quiet. It’s an understood rule I think, at least among the first to arrive for the day, that conversation be kept to a minimum and reflection be the priority. We savored it. Some swam, but today was too cold, even for me.

And then we made the return trip—the powerful and empowering journey that pushed this body of mine in a way I hadn’t felt in some time. It felt amazing. I felt so strong and so overjoyed.

We had lunch back at Hanakapiai Beach, this time being surrounded by a swarm of tourists. It is very obviously advantageous to get here early. 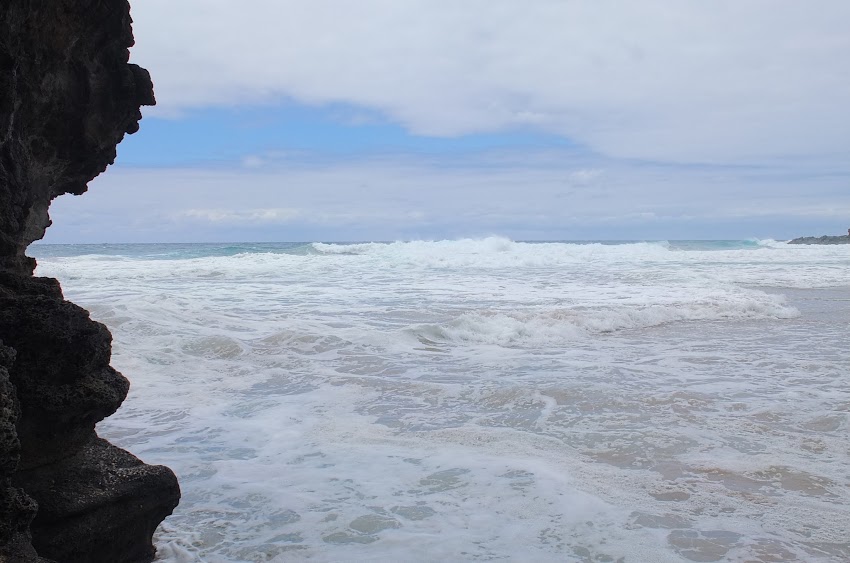 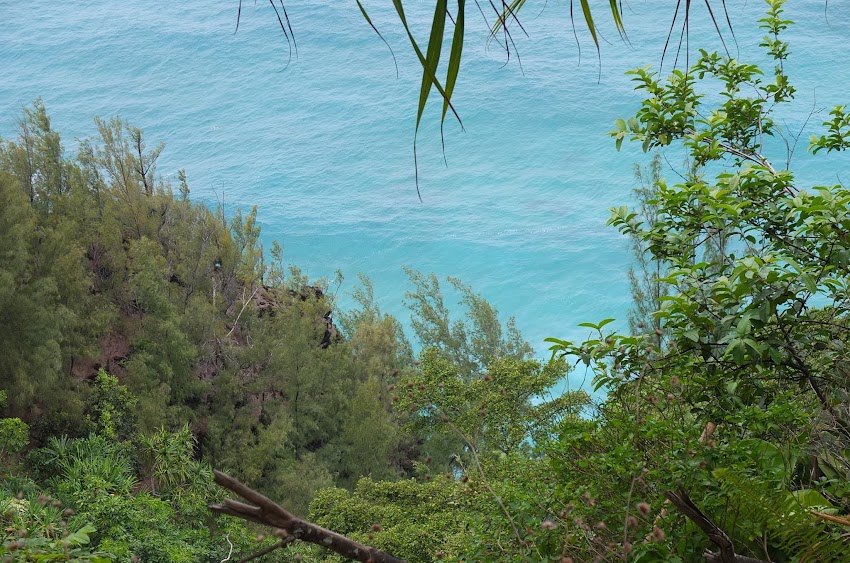 Back at Ke’e, we washed off our muddy selves before heading over to the beach. Returning from the facilities, Luke ran into the family we met at Queen’s Bath. They were delighted to share that they had toasted us on our wedding day.

Ke’e is the end of the line; it is the last beach accessible by road. Like others, it has soaring trees that provide the perfect umbrella for napping. This beach is unique, though, as the roots supporting the tree are above ground and gnarled. The swimming was wonderful the day we visited. The current is strong though, even in calm seas, and if you let it, it will carry you in an unpredictable direction. 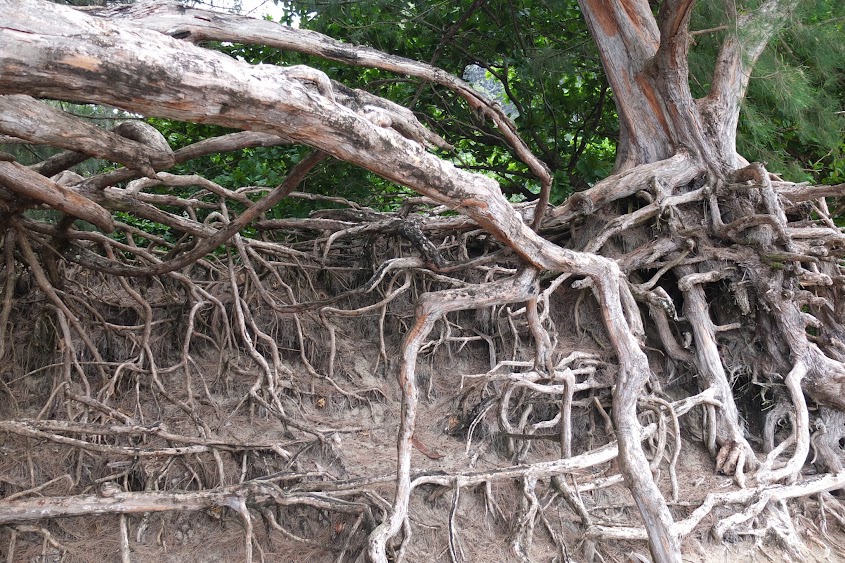 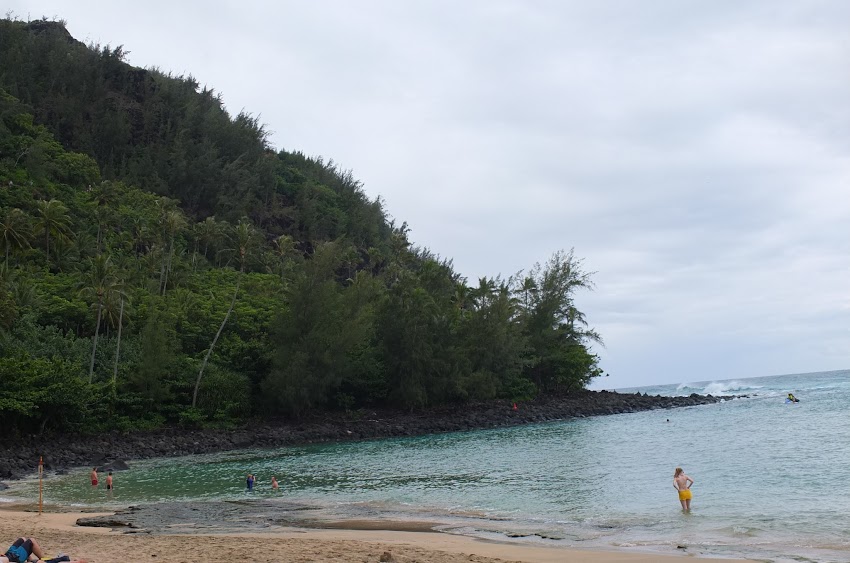 Rain determined our departure time, as the beach cleared and we made our way back to our car. I thought of the hikers back on the trail, especially the trail to the falls; neither would be too desirable when the conditions are muddy.

Tips and Resources for the Day Hike:

Overview of Kalalau/Hanakapiai trail This 8 mile journey is an adventurous, mind-blowing day hike. It is so much fun and lived up to every expectation I set. It is a must-see if your body and the environment are in the right place that day. What I mean is, it’s definitely a challenge. I’ve mentioned before, only you know your physical limits. The trail is very challenging in many areas and that should be understood before taking it on. If the weather is rainy, I’d also think twice about setting out. The trail is made of dirt, very sweep, and host to many drop offs. Rainy conditions may just be a little more adventure than you’re looking for.

Supplies Bring lots of water, food, extra socks ( I wish I had!), sunscreen, bug spray, sunglasses, and a camera. Oh, and your bathing suit if you plan on swimming.

Facilities At Ke’e there is a full bathroom with an outdoor shower as well. The only bathroom on the trail is a composting toilet right after Hanakapiai beach en route to the falls

Parking I would recommend arriving early so you can park near the trail head. Follow directions to Ke’e.