May 23, 2015–Only about fifteen minutes or so from the trail head everyone from the boat captain to the sister of my hair stylist recommended, we decided we needed to go. At 6:30am there was no one parked at the trail head other than a group of young dudes that were likely just winding down from the night before. We found the trail easily and set out. We were struck by how silent it was. Minus the sound of our feet hitting the dirt we were completely alone, and it was strangely beautiful.

The hike was a perfect level of difficulty for our first time out. It was steep but doable and had a few muddy spots here and there. The timing couldn’t have been more perfect: at 7:00am or so the sun was just finding its place in the sky and it seemed to us that we rounded corners at just the right time to see its debut. 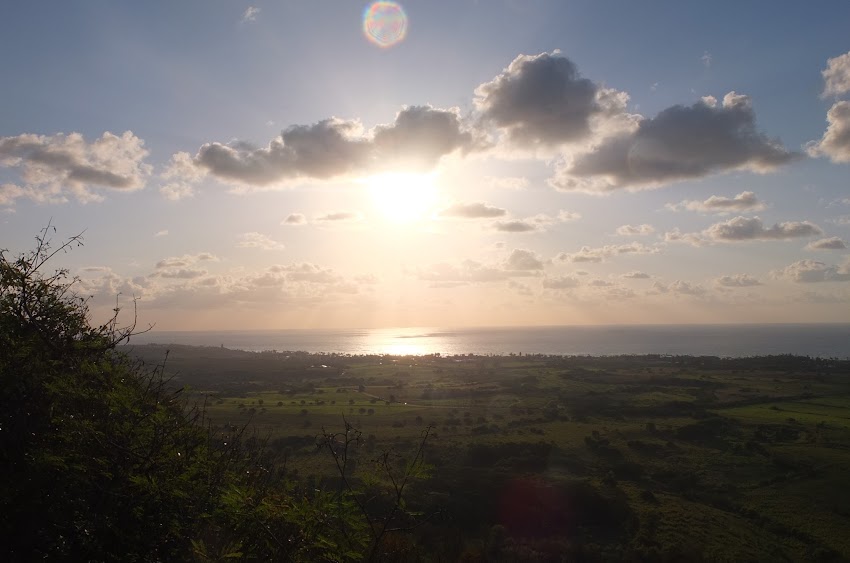 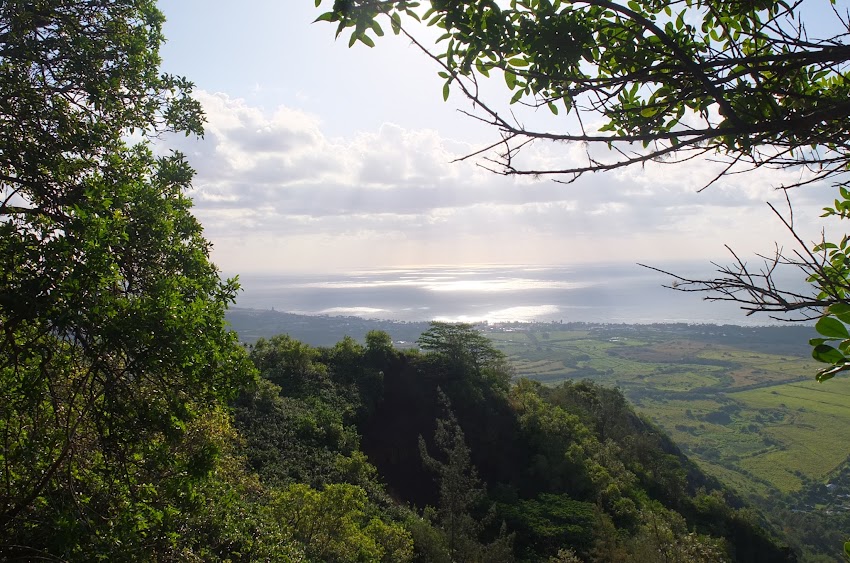 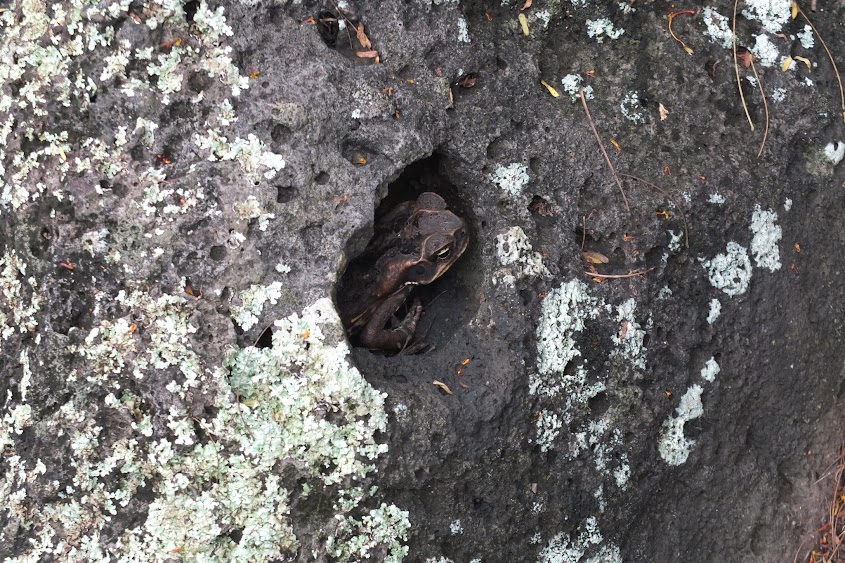 The steepness got to me after a bit and I realized why the guidebook called it a “puffer”. It is not a term of endearment. We neared the top as the first pair of hikers we saw were actually jogging up with their dog alongside. We had to laugh at this.

Here and there we reached forks that weren’t all that clear. More confusing was the trip downward where your gut (or sense of direction, whichever) needs to guide you if you don’t have a photographic memory. But I had a snapshot of the section of the book that mentioned keeping to the right so we pressed on through areas of forest and bamboo, and we were rewarded with a perfectly serene and private (save two) oasis once at the top.

We were advised that if you were brave (or foolish) enough, you could continue on in search of an unobstructed view. You know we did. Looking confused, the couple from before sent us in the right direction and this is where it got tough. There were passes over rocks and areas I didn’t think it was possible to pass. That is until we saw a man actually running back down the path. So it’s possible it appears. We reached the top and though heights never bothered me before, I’ll admit this did but in the most thrilling way possible. The views were really enough to make you breathless. Luke continued on to the very end but I remained in my little nook high above the sea. 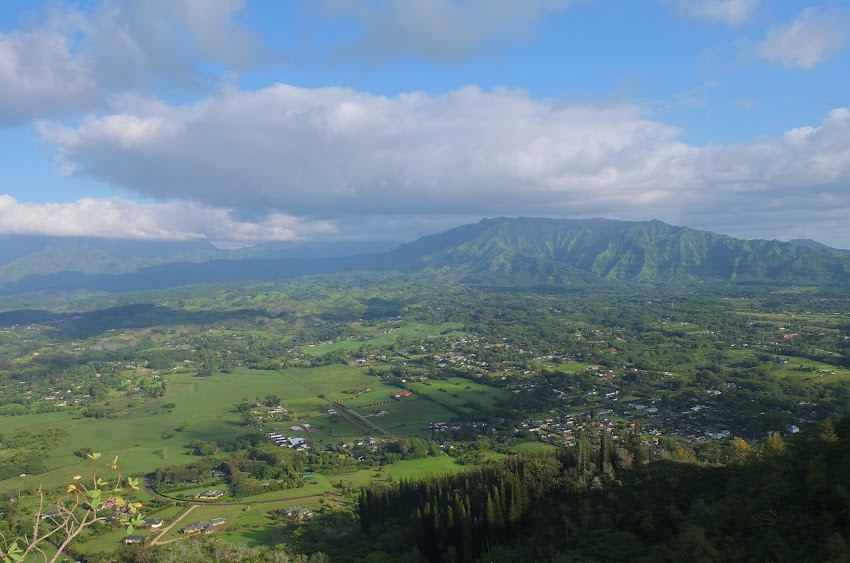 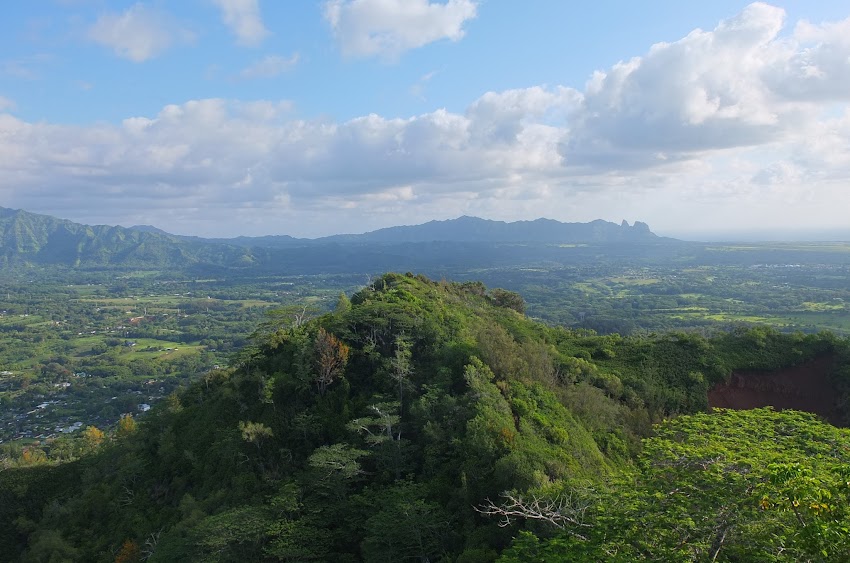 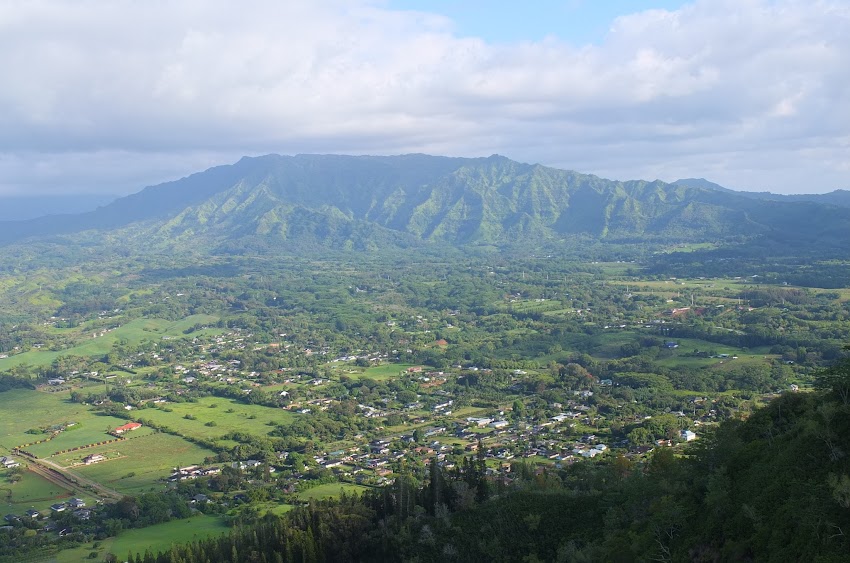 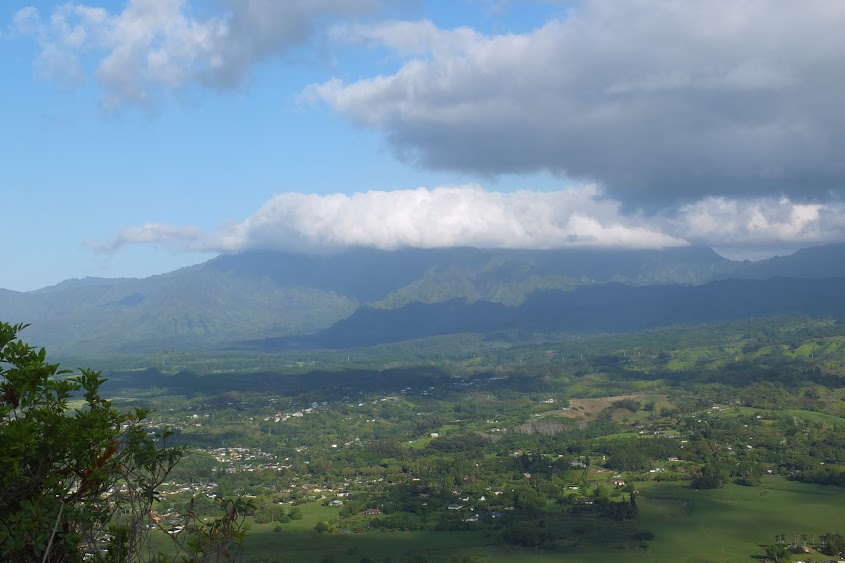 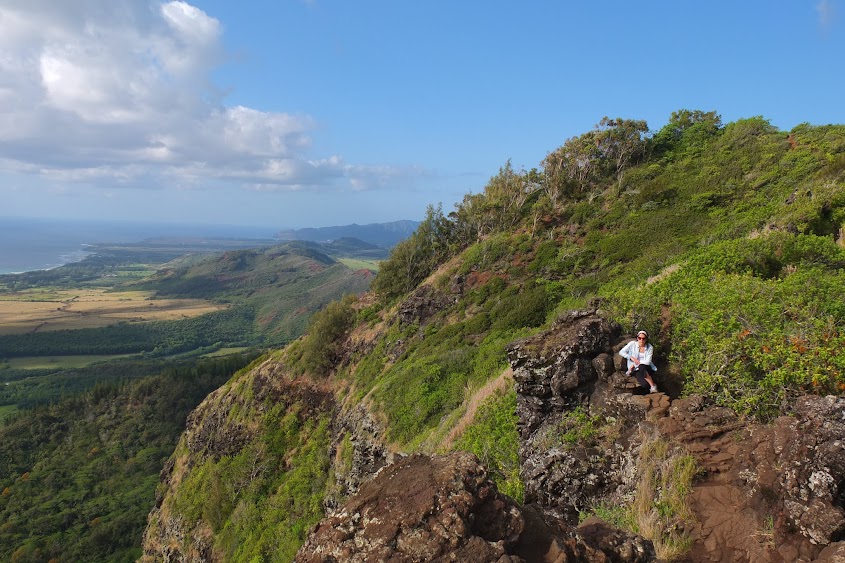 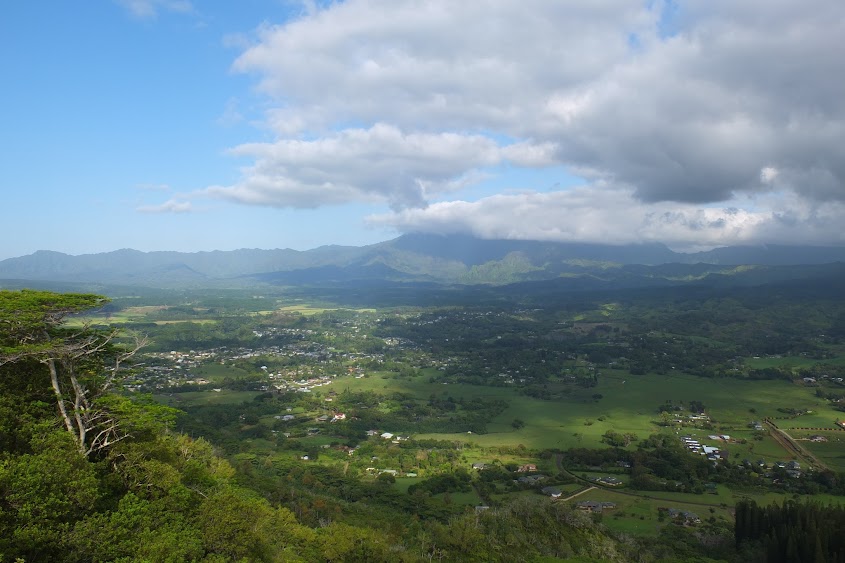 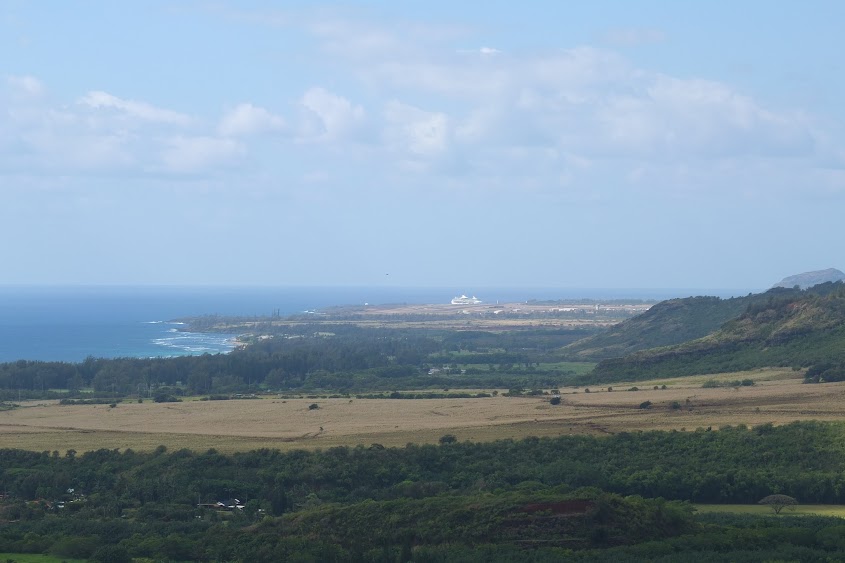 Once we navigated our way down the trail, we headed in the direction of Wailua Falls right down the road. This is considered the most sacred place on the island, but this was the first we saw of true tourism; there were the crowds rushing to check spots of the dreaded “list” and that aura of stress we just hadn’t seen before. We wandered for a bit—first towards Wailua Falls then across the street to the sacred and navigable Wailua River—before headed on to see the heiau located nearby. Heiau were places of worship located on the river long ago. Now, you can recognize them as purposefully placed stone structures located on each side of the road to the falls. 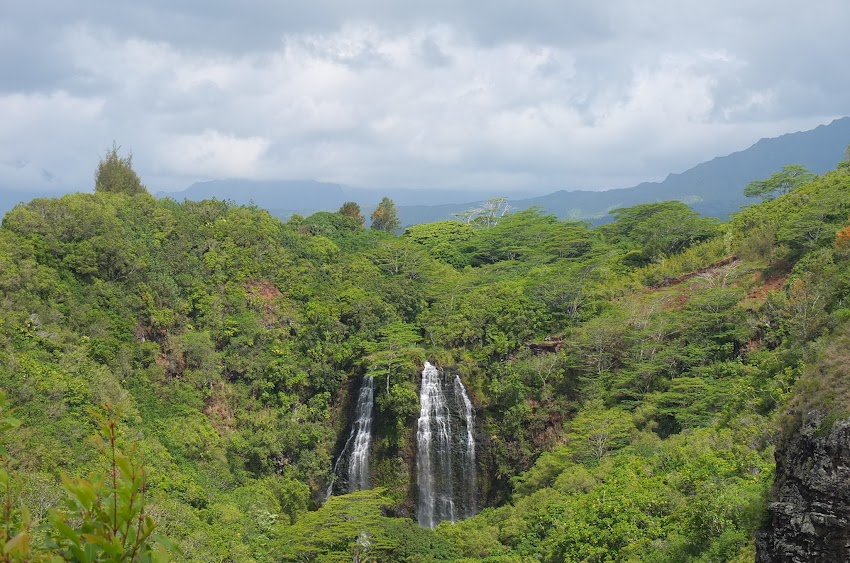 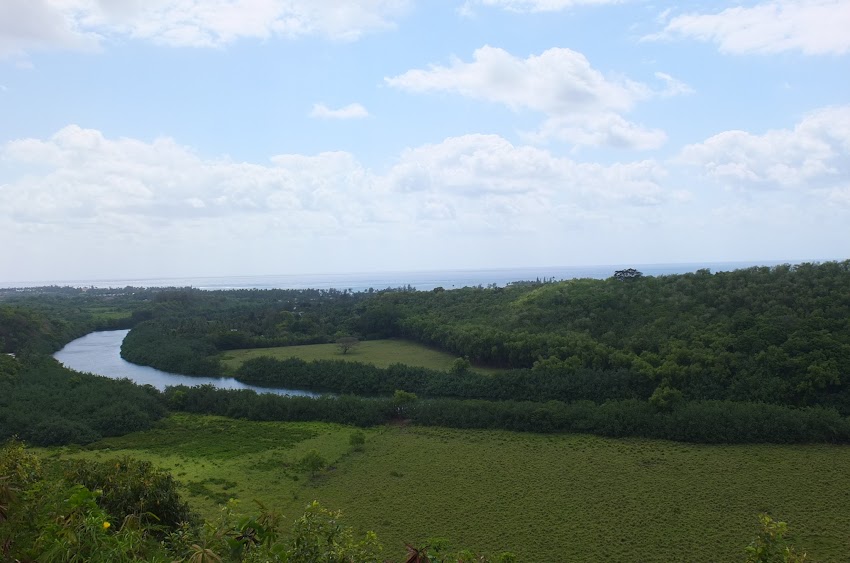 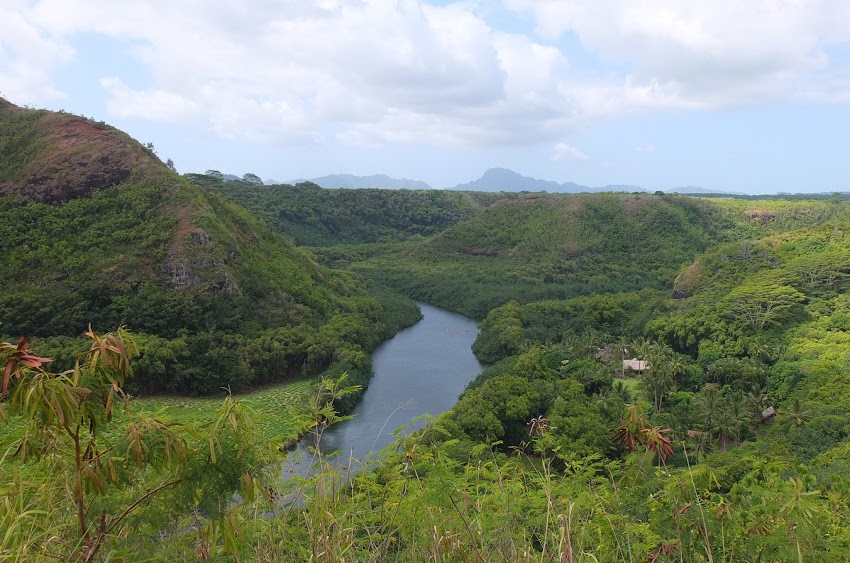 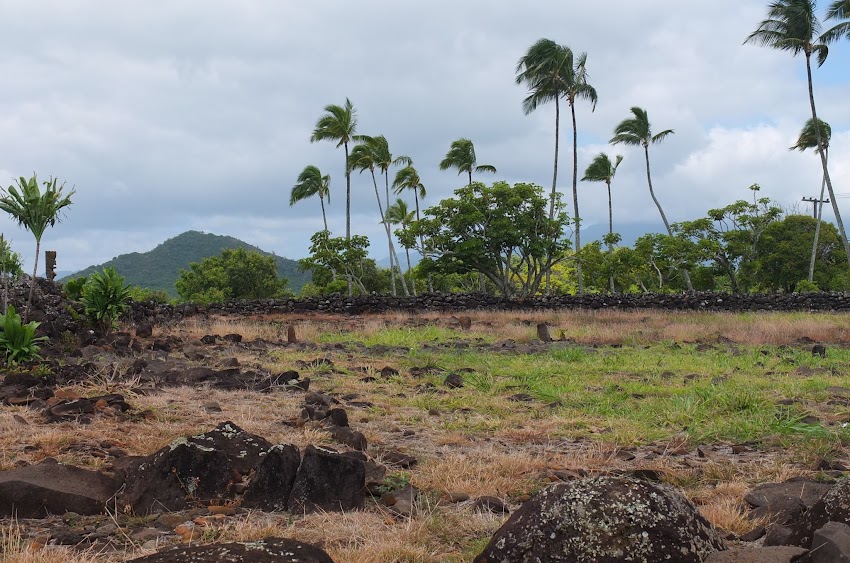 After a break at the cabin we returned a few miles south to Donkey Beach. There’s parking for about twelve cars or so as well as restroom facilities here. From there it’s a walk through a surreal tree tunnel to the beach. But first you cross a bike path that extends down the coast. We didn’t get to rent bikes to do this this time, but I think that would be a sweet way to spend the afternoon. Instead, we lounged a bit, took a walk, and watched the powerful waves strike shore. There is a cove to the left that is a worthwhile detour. It was too rough for swimming but far too beautiful not to linger. 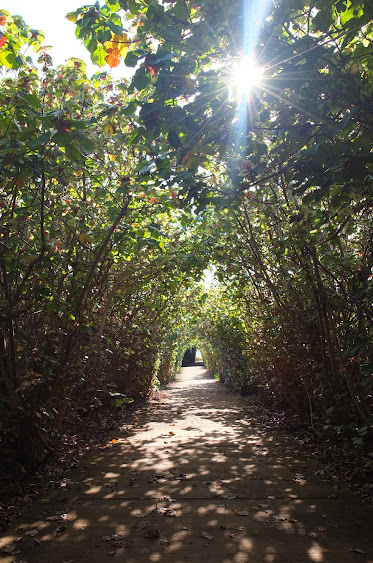 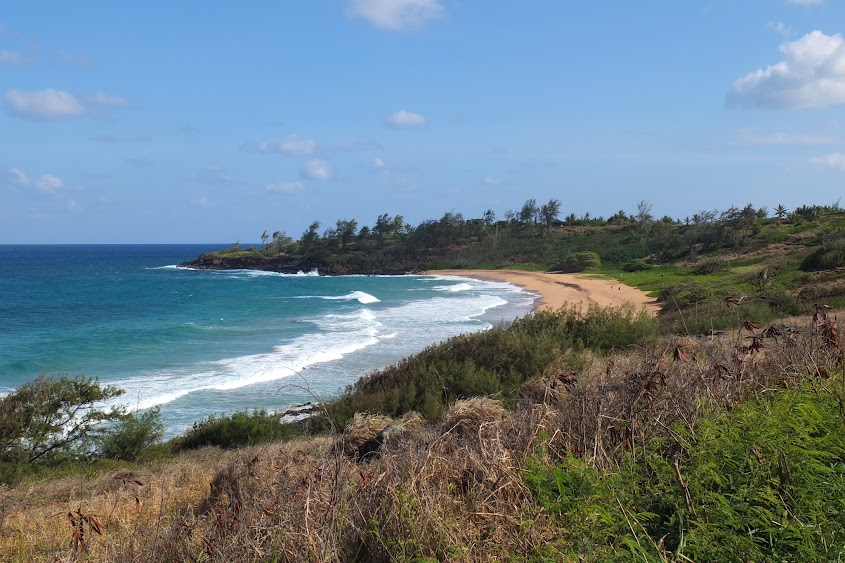 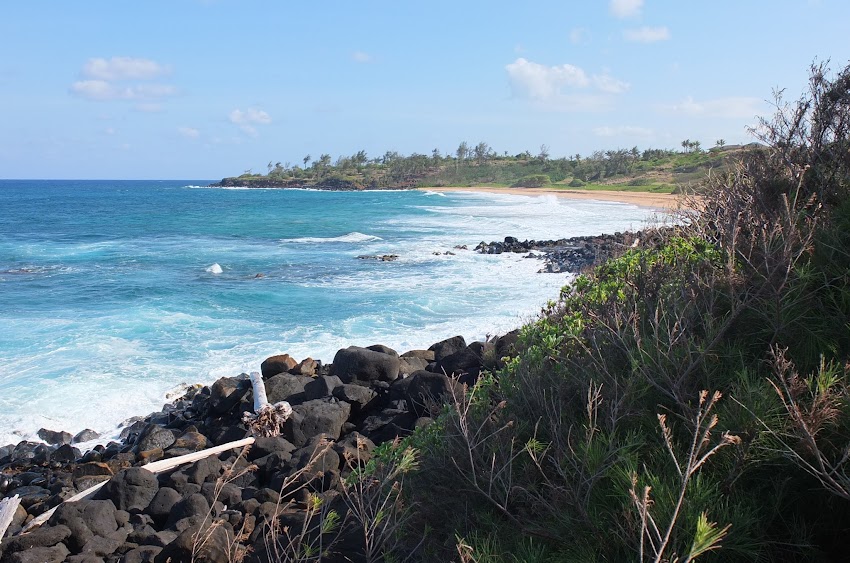 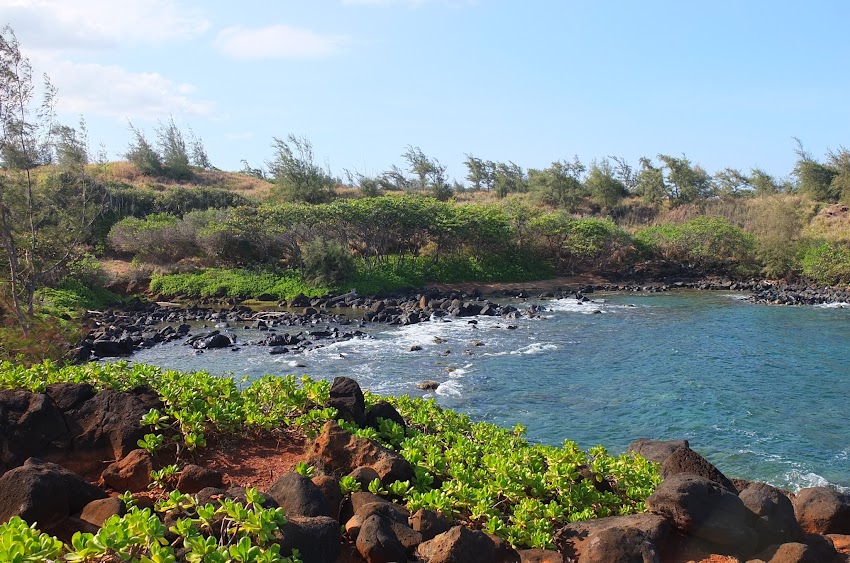 Eager to see one more, we headed North to Rock Quarry Beach which is the same beach I had on my list for a possible ceremony site. We found the turn easily off of highway 50 then cautiously made the turn onto the bumpy road that looked wrong. After a few minutes we realized we weren’t mistaken and we found the parking area easily. Rock Quarry Beach is an understated beauty. There are few people, it’s surrounded by cliffs and there’s a path through pine trees to get to the far side of the beach. This is a location where a freshwater river meets the ocean and it makes for a setting very different than most others. I waded through the river and explored a bit before judging it not to be a swimming day here either. It really didn’t matter. A bitty detail like that can’t rob us of any joy. 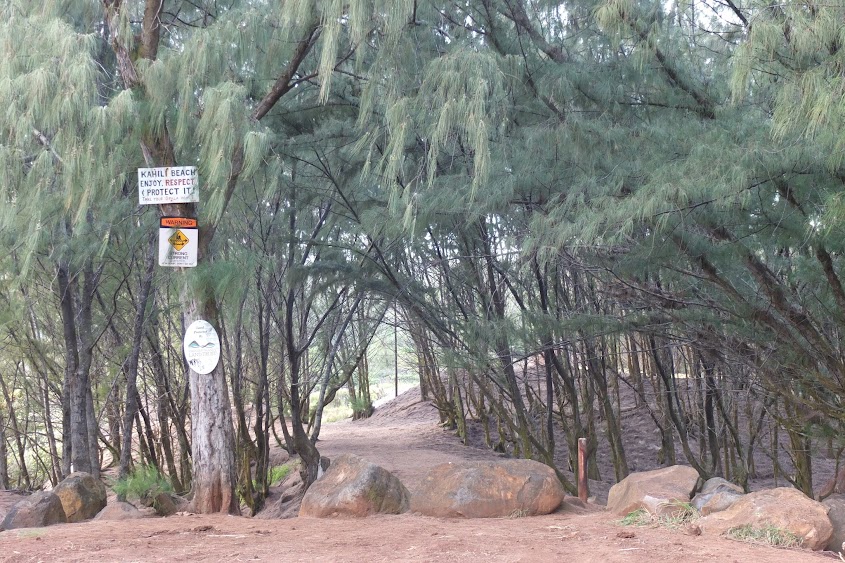 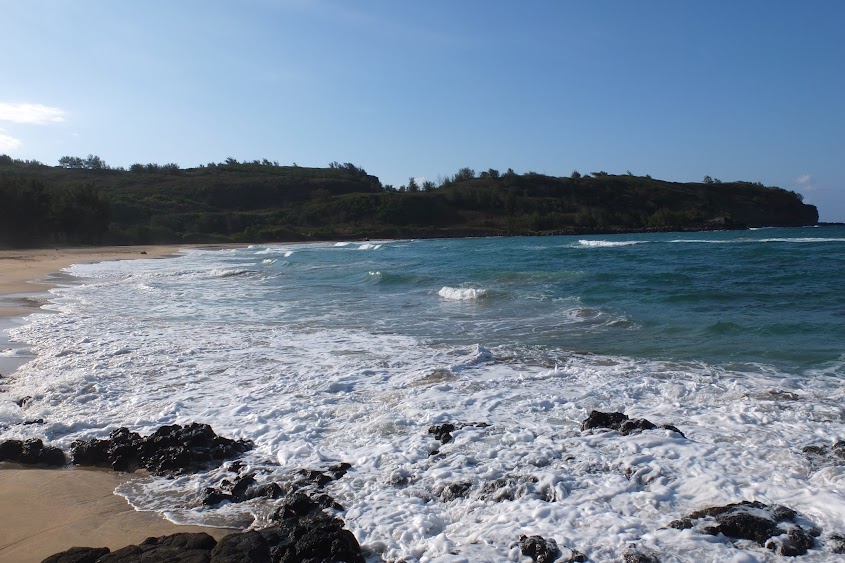 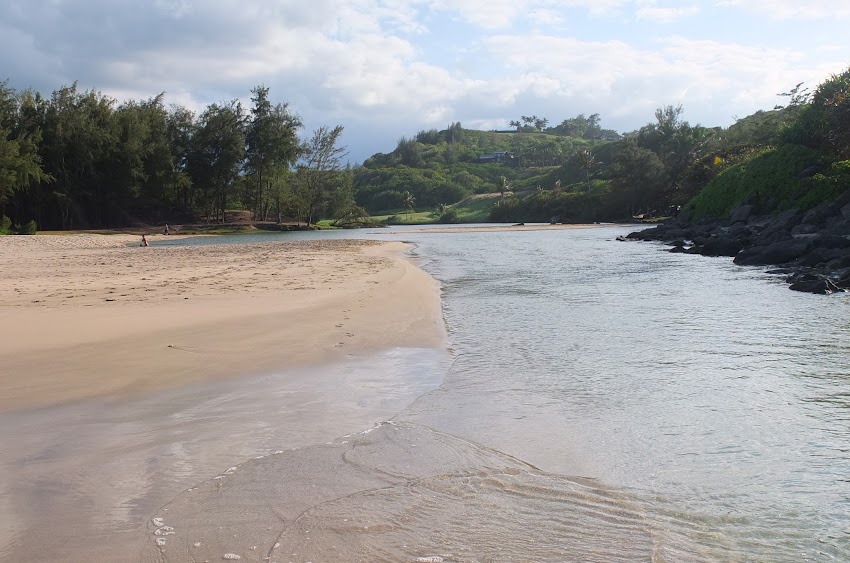 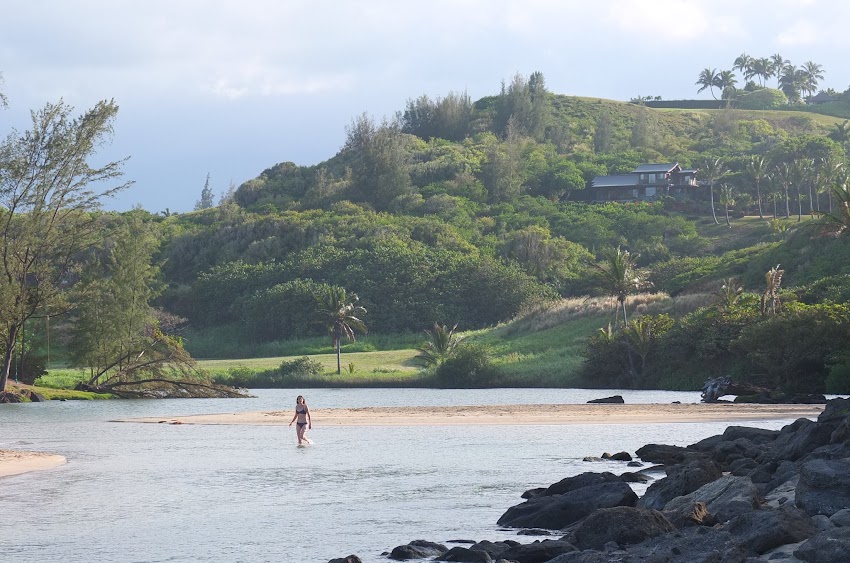 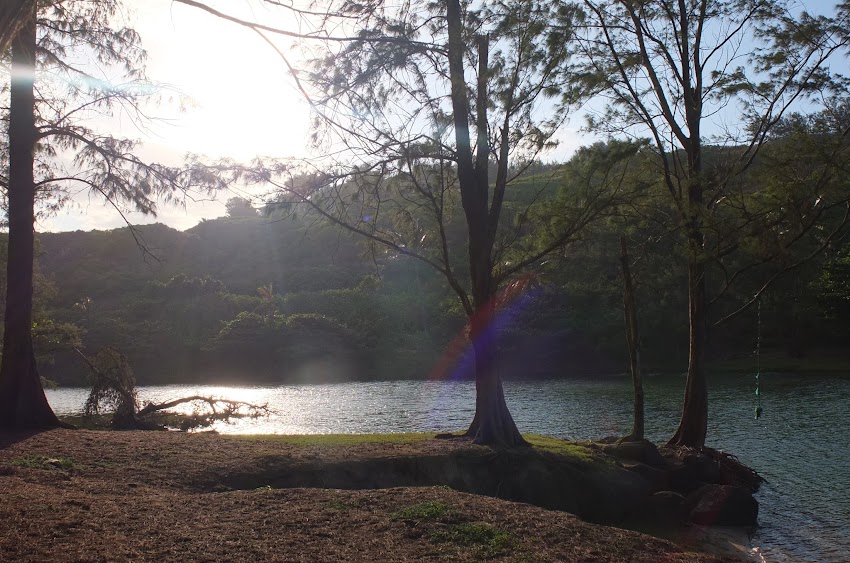 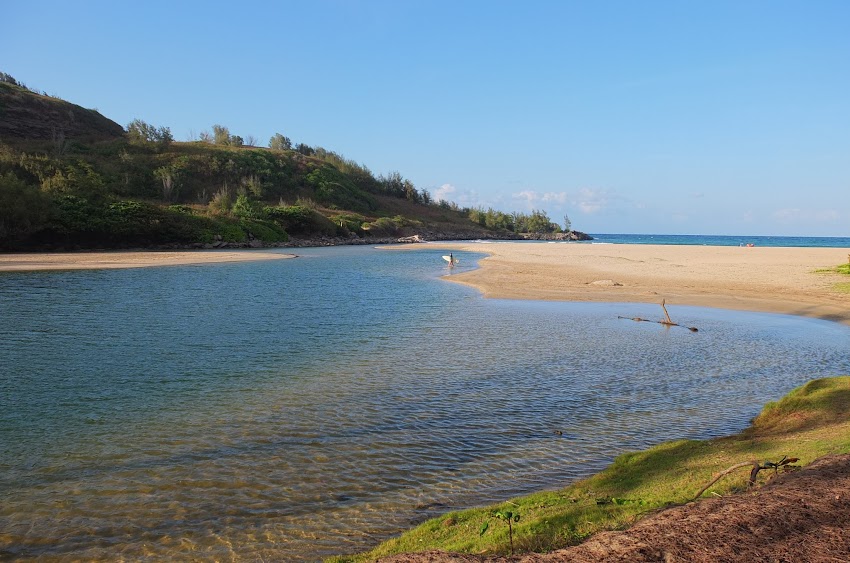 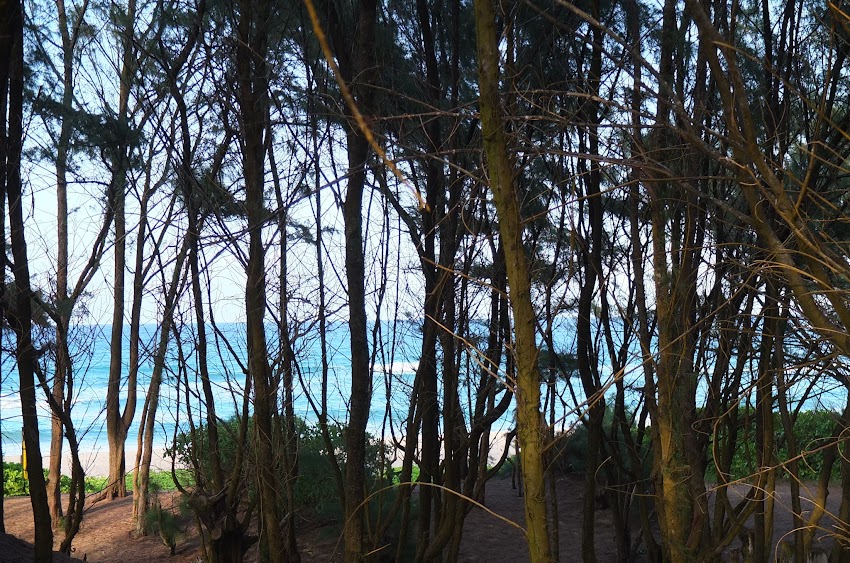 So now, about a week in, I have to ask what is it with this place? One beach or view is more gratifying than the next. I suppose L is right—it just doesn’t make sense to go someplace twice. That doesn’t mean I’m going to stop asking though.

The hikes on Kauai are plentiful, varied, and beautiful. After being advised to do this particular hike, Sleeping Giant, by everyone we spoke to, we decided on it. There is a huge variety of options in the guidebook.

The section up to the main area is likely suitable for most hikers. There are steep areas that require a little finagling, but overall it’s a straightforward journey. The roundtrip is very approximately 4-5 miles.

Wherever you go, bring lots and lots of water. If you have too much as Captain Larry mentioned, you can always leave it along the trail for someone else. A few snacks never hurt, either.

As always, know your limits. Only you know your level of physical ability. So if you decide to take on a hike that is labeled strenuous, be sure that’s what you’re up for.

Here is a link to where you can find the trail as well as the heiau.