We planned precisely one “excursion” if you will, and that was our sailing trip down the Na Pali coast.

The morning after our wedding, we woke up, called the Captain Sundown office to be sure the weather was suitable for sailing, and once given the OK we were off to Hanalei.

We arrived to a grassy space behind the food trucks in Hanalei where we’d leave our car for the day. Nicole, the captain’s wife, along with their sweet-as-can-be baby, greeted us and took our payment before we took a seat on the picnic tables and waited to be shuttled over to the dock. The group was one of about fifteen or so, with all of us in our twenties or thirties. 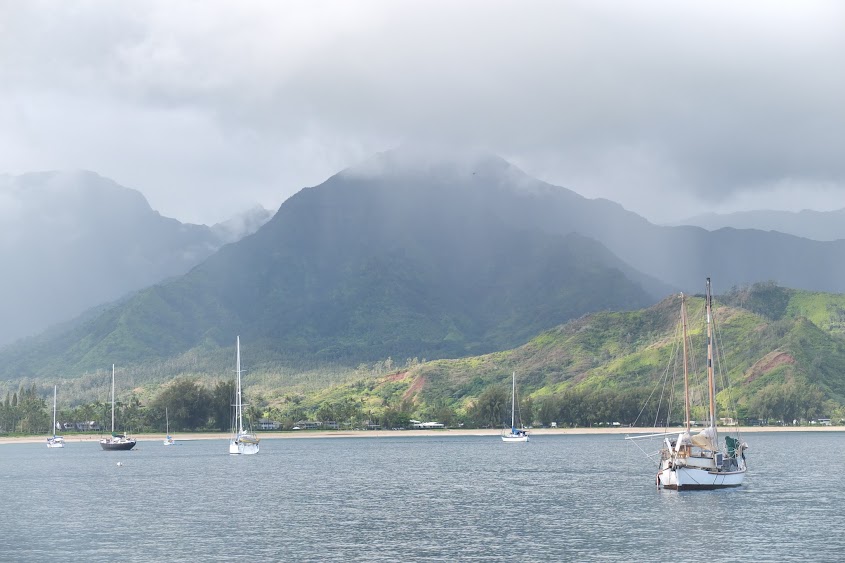 Once at the dock, we boarded the dingy piloted by Captain Larry and traveled out to the catamaran. It was all so exciting, especially given the fact that we have a sort of unreasonable infatuation with sail boats that wasn’t cured but instead fueled by this trip. Anyway, once aboard we took a look around and found our place at the front of the boat and awaited the rest of our group. We also met Nick who was assisting the Larry on this trip. Once everyone was on board we headed out of Hanalei Bay towards the iconic Na Pali coast. 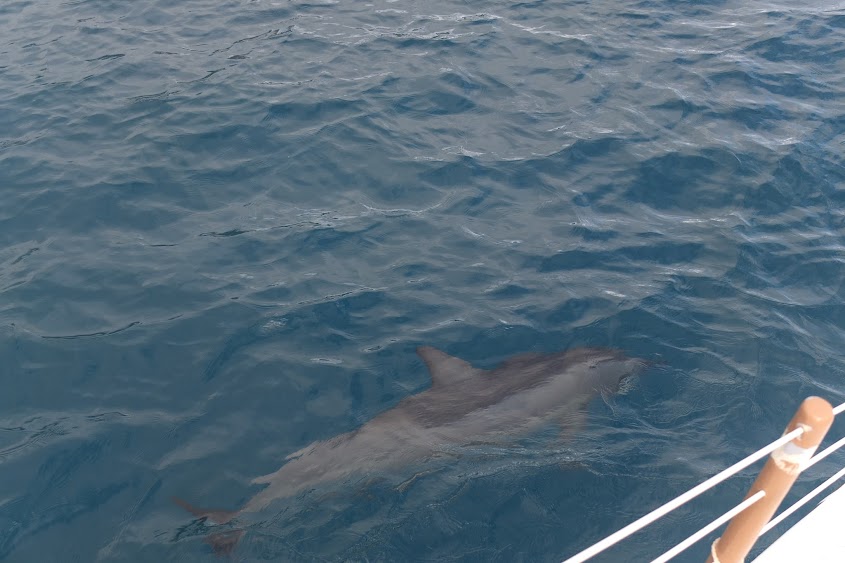 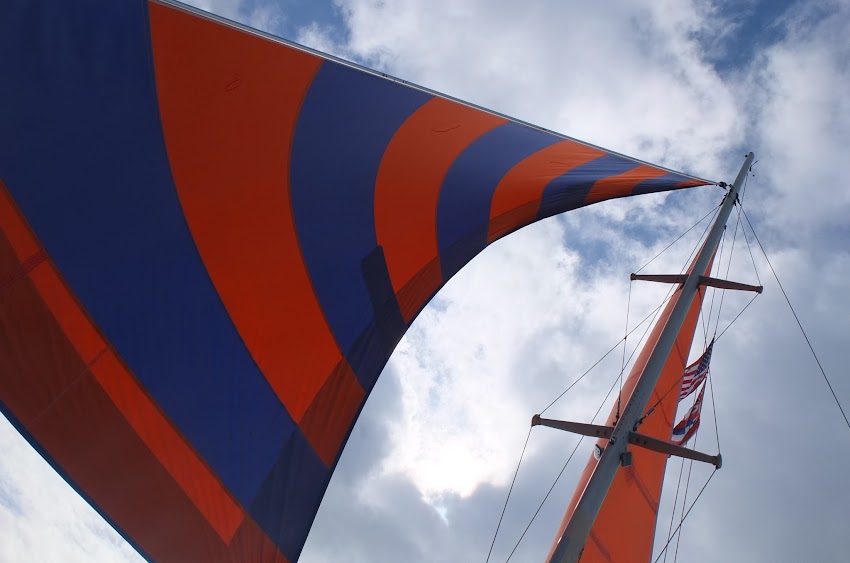 What followed was more than we could have imagined. Not being one for tours really, this was so different. It was a low-key yet thrilling day on the sea, with access to an area of the coast we wouldn’t have reached otherwise. We motored out for only a few minutes before running into a large pod of dolphins. It was sort of idyllic watching them guide us out to sea. We continued on, disappointed there wasn’t enough wind to put the sails up at first, when twenty minutes or so later it picked up and up they went!

Captain Larry and Nick were a blast. They had amazing personalities and such a fondness and appreciation for the island and the ocean. I loved hearing about their adventures—Nick as a kayak guide leading the 17 mile trip along the Na Pali and Larry as a fishing guide in Alaska…each adventure more awe-inducing than the last. In between stories they passed on short narratives of the locations we were passing. About half-way down the coast there was a surge of excitement as one of the lines that was set out at the beginning of the trip caught something! That something ended up to be a monstrous Ono that proceeded to be hooked and placed in a cooler on ice for the duration of the trip. Only once was I started by the loud banging of which I couldn’t pinpoint the source, only to realize it was coming from the cooler… 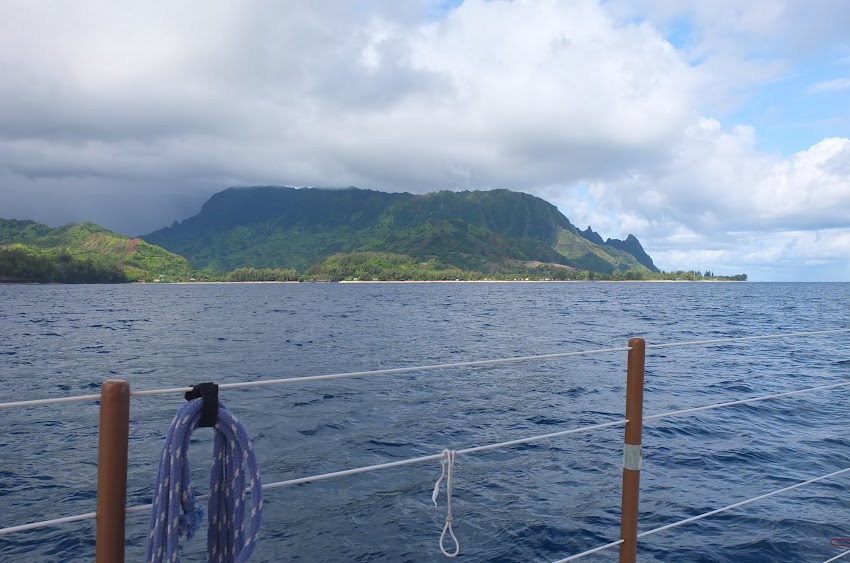 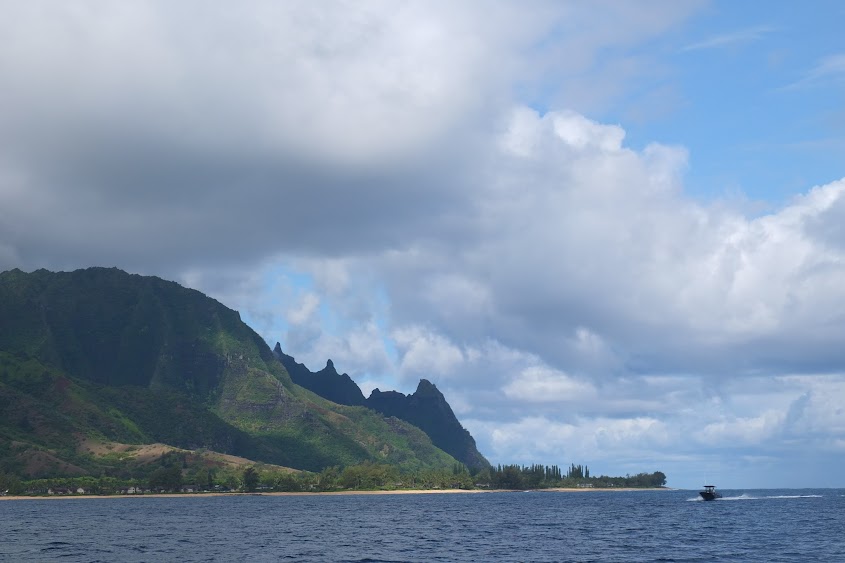 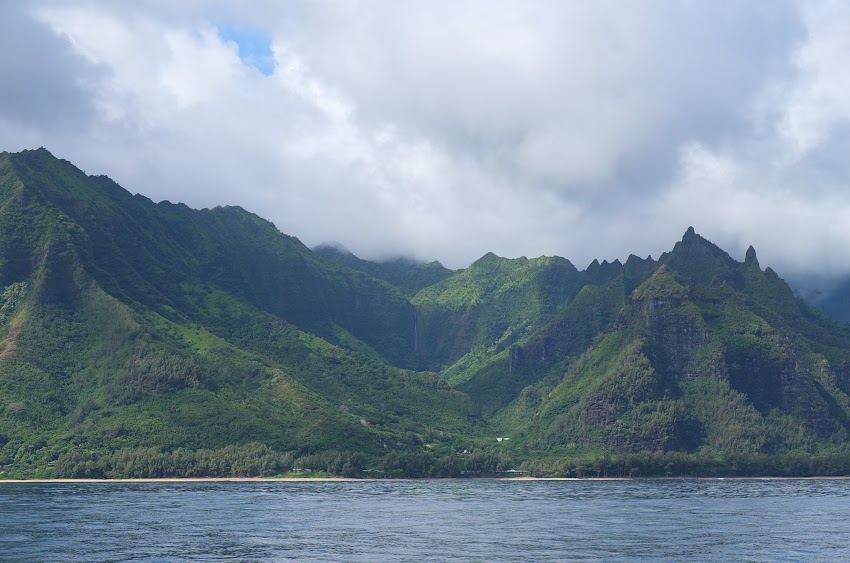 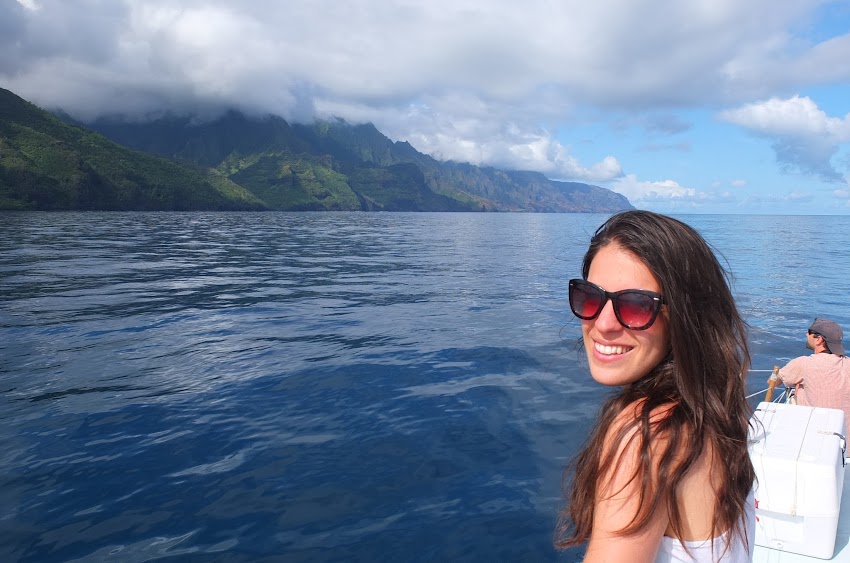 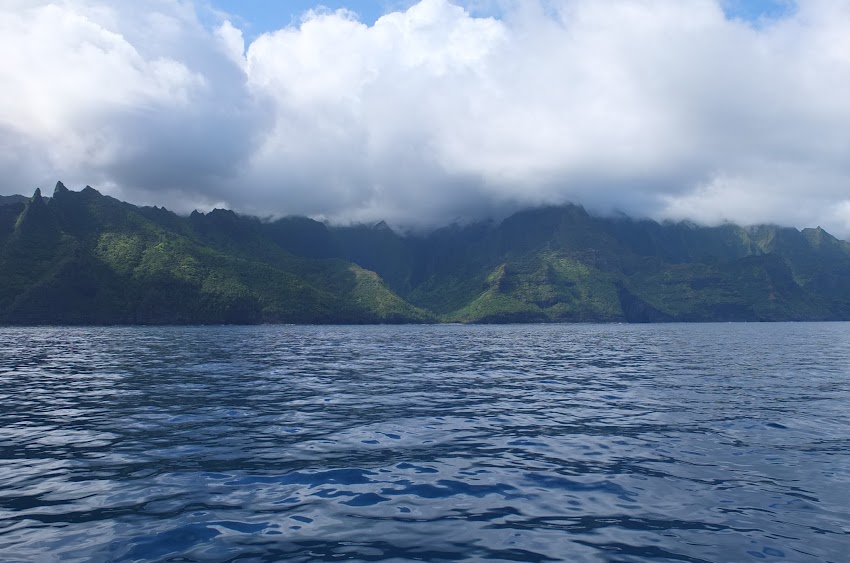 The water was calm and we were able to really absorb the sites we passed: beaches (Kalalau and Honopu, the former only accessible via hike and the latter by swimming), sea caves, the majestic Kalalau Valley, and so many waterfalls. Na Pali is more stunning than any picture can ever convey; it is truly magnificent and observing it is an overwhelming, all-encompassing experience that we were so fortunate to have. It’s still unbelievable to me that a place like this exists, really. 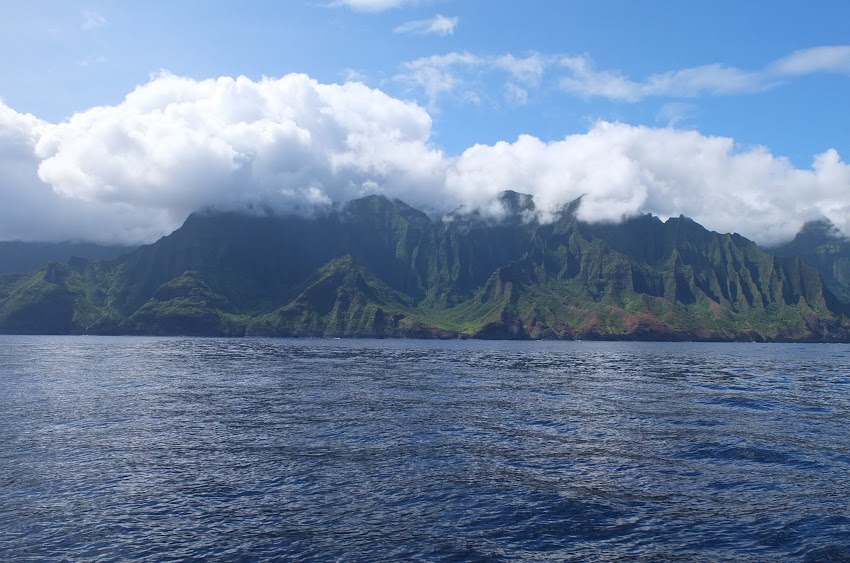 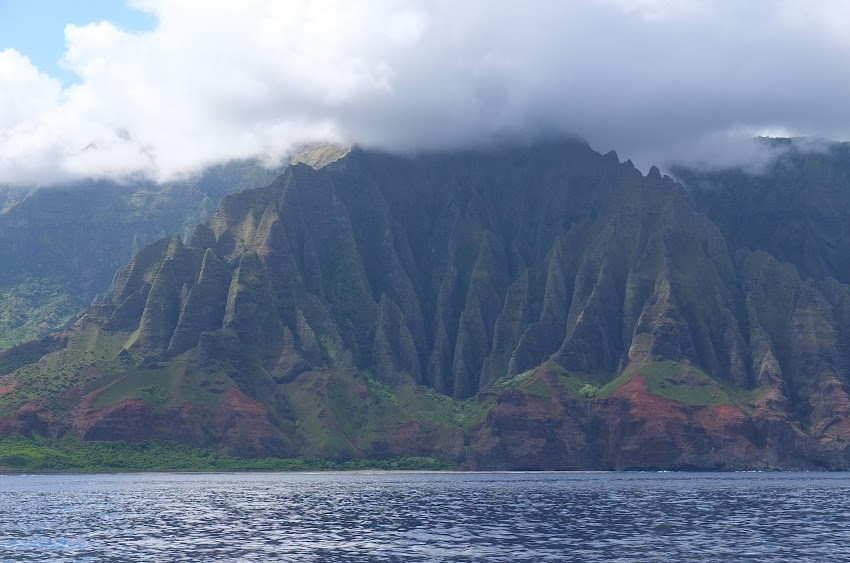 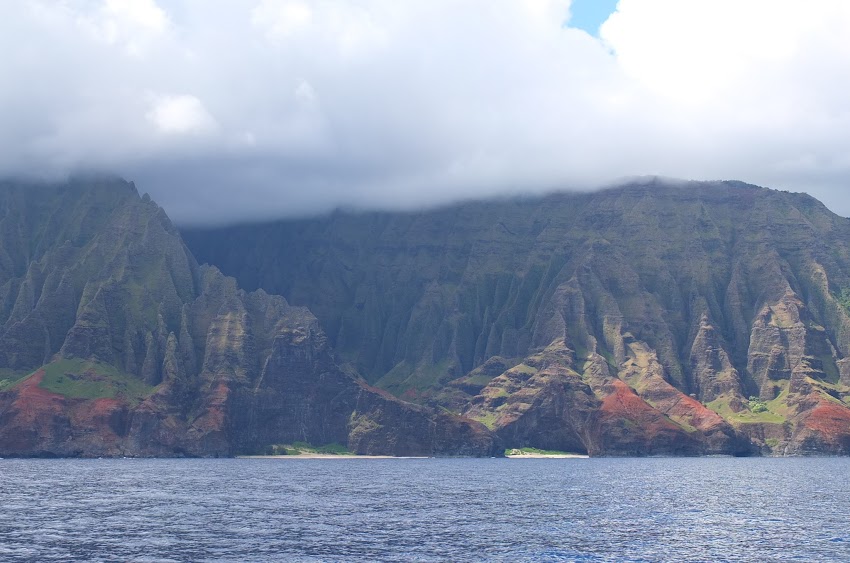 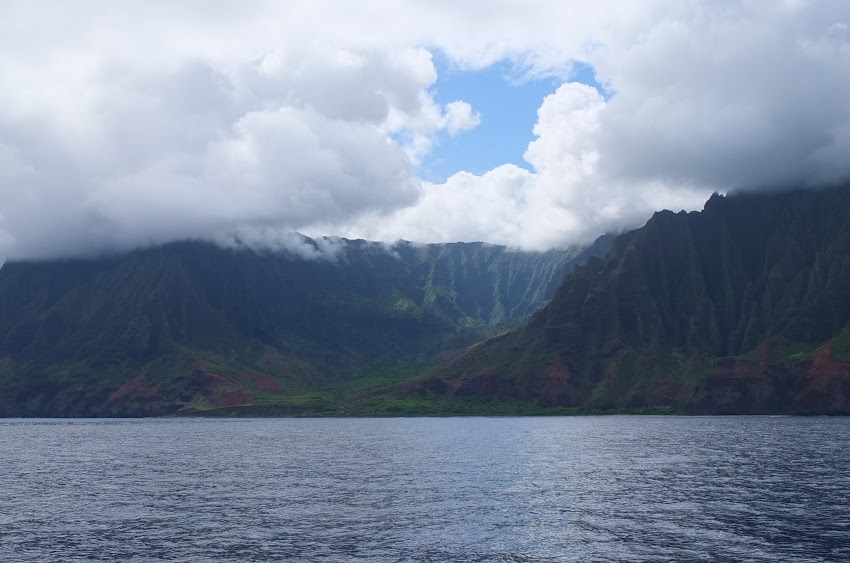 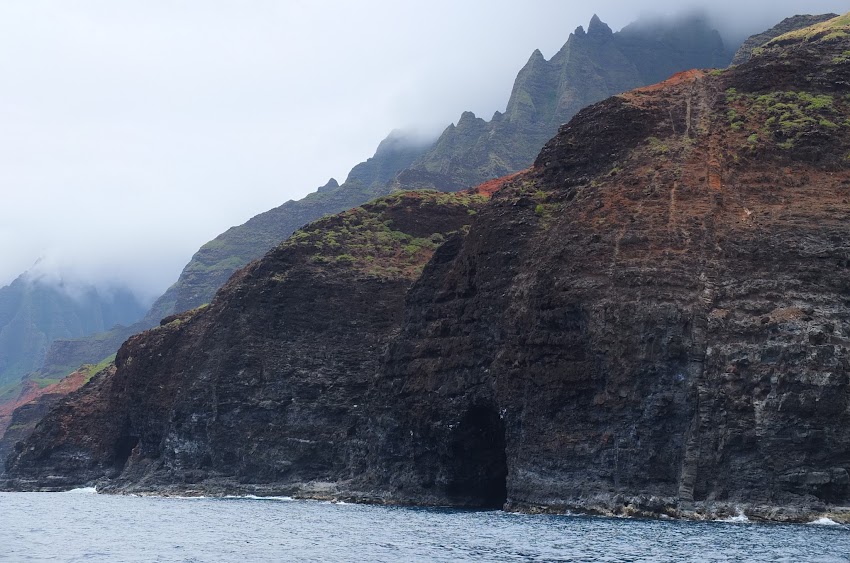 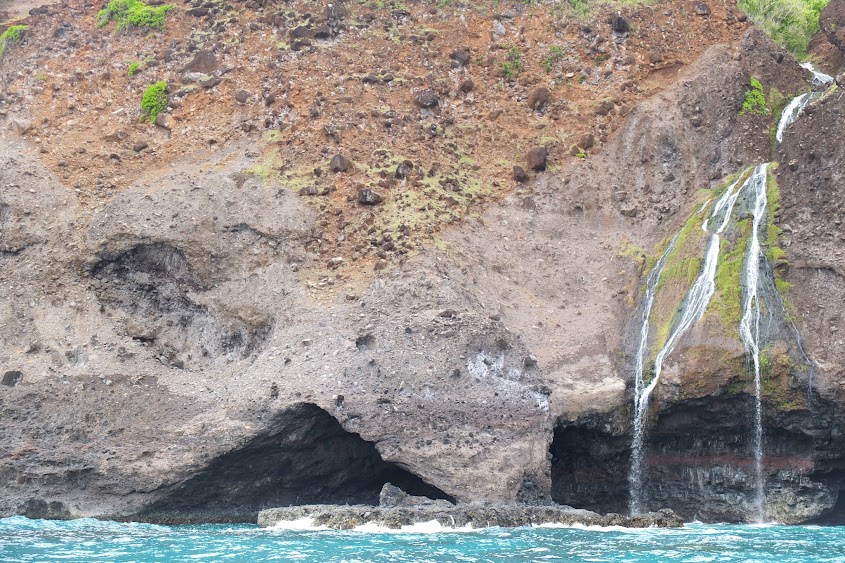 After a couple of hours we arrived at Nu’alolo Kai, a prime snorkeling spot at the end of the coast. Once equipment was passed out and prepped, we entered the water with minimal restrictions other than staying away from an area labeled as one where we may see things we don’t want to see. I still don’t know what that means! At the time I had no interest in finding out. I set out and sped through the water, feeling like a superwoman between my fins and the power of the current. The underwater topography was incredible and almost chilling at times; it had those narrow aisles of sand that are always the setting of shark videos, you know the kind. But we didn’t see a shark. We did, however, see a sea turtle! It was awesome and I became even more excited when I turned around underwater and was able to signal to Luke to look just in time.

After a while we were back on the boat having lunch before securing our belongings and setting out on the trip back to Hanalei. By then, the stormy weather that held out all day seemed to be heading towards us. I took a seat out front and a few bumps later whoosh! the front of the boat was under the wave and I was covered in water! The air was much colder than the sea, so it made sense to stay up there and allow the waves to immerse me in warm water. So for the next hour or so the waves found their way on deck and covered us with water over and over again. It was such an awesome trip. Once back on shore, we gave thanks and said our goodbyes to Nick and Captain Larry and Nicole shuttled us back to our cars. A whirlwind of a day, but an amazing one at that. Exhausted from the past few days really, we went straight back to the cabin and spent the evening cooking and singing, not too dissimilar to our evenings at home. The full, active days are now becoming something we crave and what better place to develop the habit.

There are many boat companies to choose from, a few (including this one) departing from the North Shore. We settled on Captain Sundown because it was a long tour on a sailing catamaran (remember our infatuation?).  Anyway, my research led me to understand that if your goal is to see all of Na Pali (in the summer months), leaving from the North Shore is a must. That being said, the South Shore departures are a good bit cheaper (about $50 less).

Captain Sundown Na Pali Snorkel Sail We were very happy with this tour! The boat was beautiful and the staff was so charming. There’s truly nothing like heading down this coast in a sailboat, I’m pretty certain about that. Being able to wander around the deck, sit on the trampolines and chat with the “crew” was wonderful. The Hanalei departure location is perfect for those staying on the North and East shores. In addition, the timing of snorkeling was such that there weren’t too many other tours at Nu’alolo at the same time. The narration is limited, but that’s not something that concerned me. Snorkeling gear is provided. Lunch and soft drinks are provided as well (sandwiches and chips), but you are also welcome to bring your own (we did). All this to say, I would absolutely do this tour again.