The routine of early morning wake-ups was the perfect remedy to overcrowded parking lots and beaches. At least the possibility of overcrowded parking lots and beaches. Yesterday we e-mailed our officiant and photographer asking if maybe it would be at all possible to move the ceremony up just a little bit? The strength of the Sun is nothing to underestimate and thankfully they are able to comply. Funny now that I think about it: our photographer, Rachel, suggested 8:00am or 8:30am weeks before now and I thought it a crazy suggestion. Not crazy, just smart. 8:30am, two days from now.

We headed north again today, this time almost to the end of the road. Navigating the island couldn’t be easier with the mile markers and really only one major road that takes you to the north shore beaches. I’ll say, however, GPS is a precious resource when you’re winding down those uncharted beach roads and it still works. 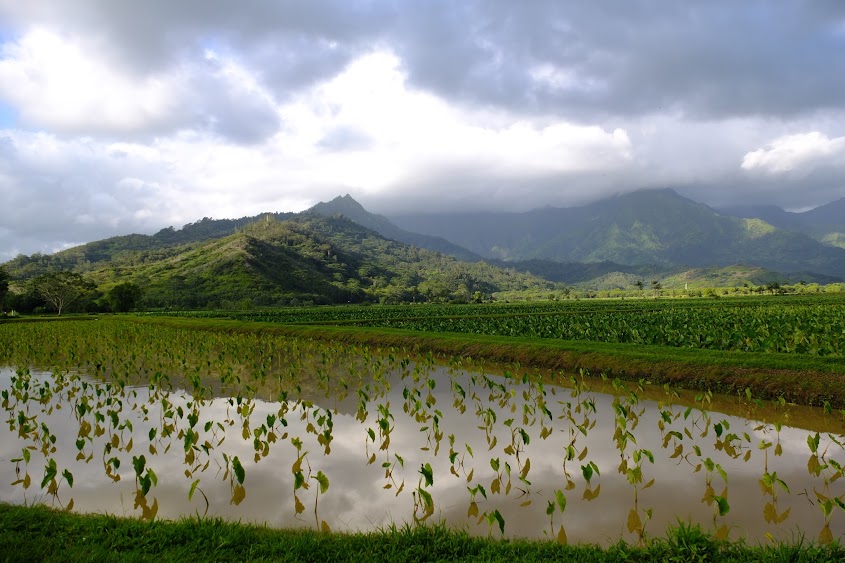 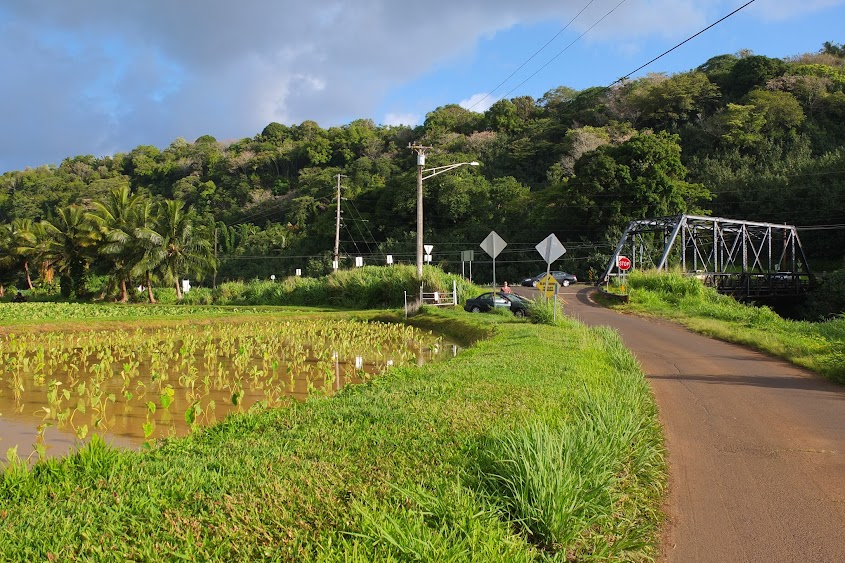 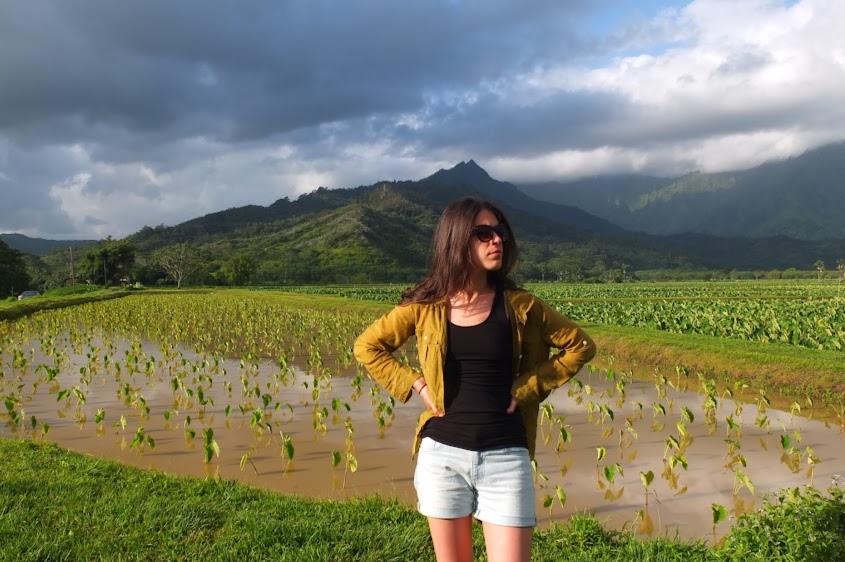 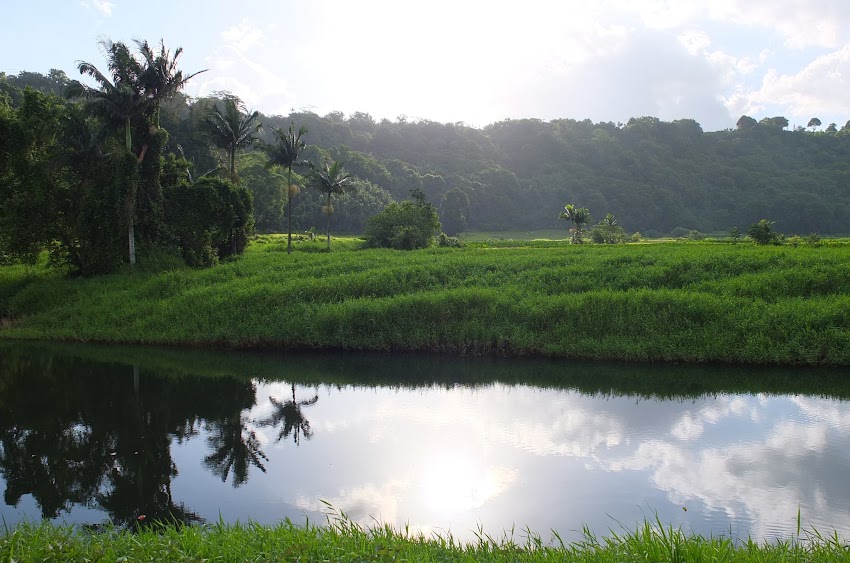 On our way, we stopped right over the bridge at the Hanalei Taro Fields. I’d spotted them during my research and again at the overlook the day before. They’re a vision. Before our trip I daydreamed about having our ceremony there, but private property is private property, so a visit had to suffice.

We carefully pulled off the road to the left after the Hanalei Bridge and parked at the end. We wouldn’t be long. I walked along the road as folks made their first morning rounds on their quads to examine the taro. For many moments no cars passed or other vehicles droned and I was standing there in the middle of the road surrounded by water in some form and birds and plants of all different species. It was as prehistoric looking as you can imagine.

We continued on, passing Hanalei and entering an area of the island that was indeed much slower, less developed. There were roadside stands for flowers and coconuts (though as we’d learn later, purchasing coconuts just to drink the water is a waste, really) and a general store that could indeed be useful. We were entering Ha’ena.

According to Kauai Revealed, the parking for Tunnels Beach is right beyond mile marker 8. You will know it otherwise by the plethora of signs telling you that it is precisely not the place to park for Tunnels Beach. There is a dilemma it seems between residents and the county’s commitment to making it public access, so we drove on. Further down the road is Ha’ena State Park, and there is plenty of parking, not to mention a changing area, bathrooms, and shower to rinse off. 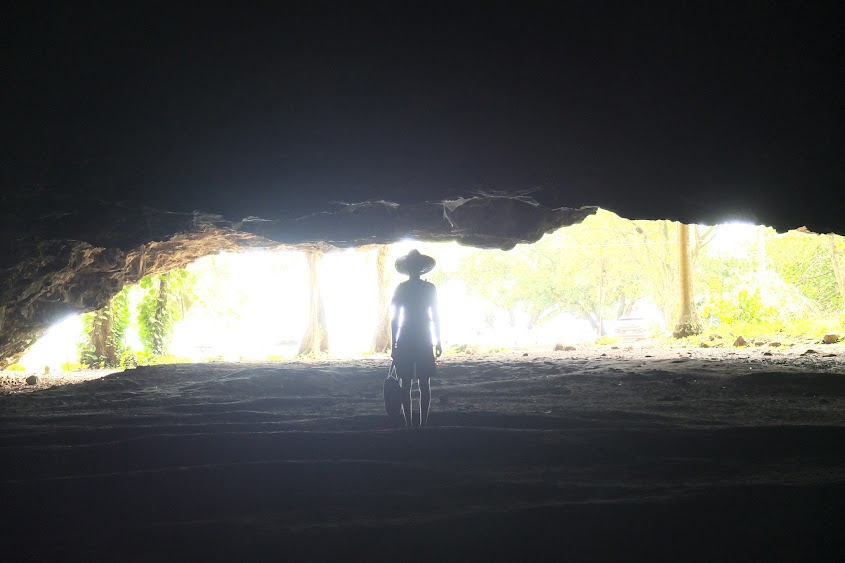 We parked and decided to explore a bit before gathering all of our things. Surrounded by cliffs and the sea extending in front of us, we walked across the street to the Dry Cave (former sea cave).  I looked back and saw L standing in the center like some type of mirage (The photo above is one of my favorites.).

Back across the street, we gathered our gear and headed to the right to reach Tunnels Beach. I’ll tell you, though, Ha’ena Beach is special too. There’s even an area to camp if you’re so inclined. It’s a bit exposed, but even still. 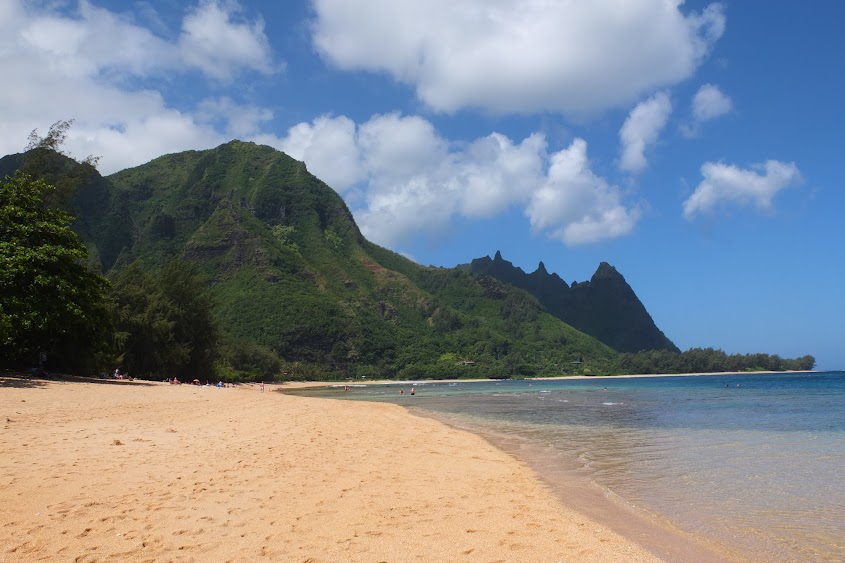 Tunnels is spectacular, and it’s no wonder why it’s so popular. From the moment we arrived, I was plotting our return. It’s likened to Fiji, and it really doesn’t need to be…it’s stunning in its own right. The mountains, the perfectly calm (that day) water, the sunshine…it was paradise. We settled in under a large tree that provided us with all the shade we needed. Lucky, too, because in the hours that followed the trees around us filled up with families.

I spent most of the day in the water snorkeling. The unobstructed sun made for a perfect day for it, and one I won’t soon forget. In between, I finished up my vows, finally getting to the place of calm I was searching for in the weeks before. I scribbled all over the lone piece of paper I had, boxing the final section I came up with.  I was happy with them. I read them out loud a few times to get a sense of the flow. 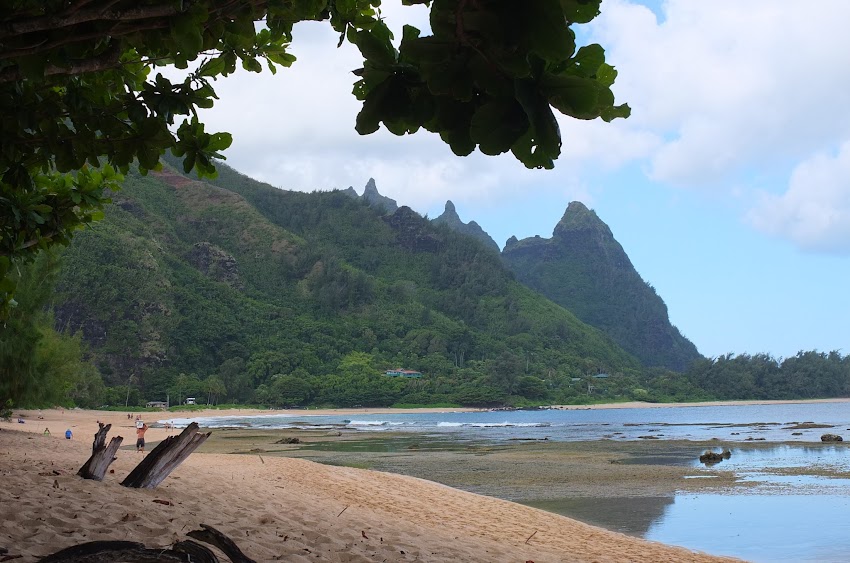 A bit after noon we had lunch together at the picnic area at Ha’ena Park. We spread out our salads and sides and relaxed for a bit. Later, a man rode up and parked his bike at the nearest pole. He was older but in incredible shape and carrying what appeared to be many of his belongings on his two wheels. What’s for lunch? he asked, and it started a conversation that never left us. He told us of his experiences hitchhiking around the island (very popular) and exposure to all of the ingredients that grow wild there. Also, his attitude towards rotting fruit that may be on someone’s property. I just knock on their door and see if it’s OK. Not only is it OK, but they usually insist on bringing me a ladder so I can get the good stuff. He mentioned his time living in the magical Kalalau Valley. That in the 70’s, they had a Rainbow Gathering type of thing going on in that valley. Speaking of which, did you know there’s such thing as a “moonbow”? As he tells it, they’re known to happen in the beach at the end of the Kalalau Trail. Our conversation ended as he grabbed some seed and peanut butter and set out to feed the birds nearby. He’s known for that-taking care of the plants, animals, and environment that is Kauai-and being a kind and inspiring person. We were so fortunate to cross paths with him. 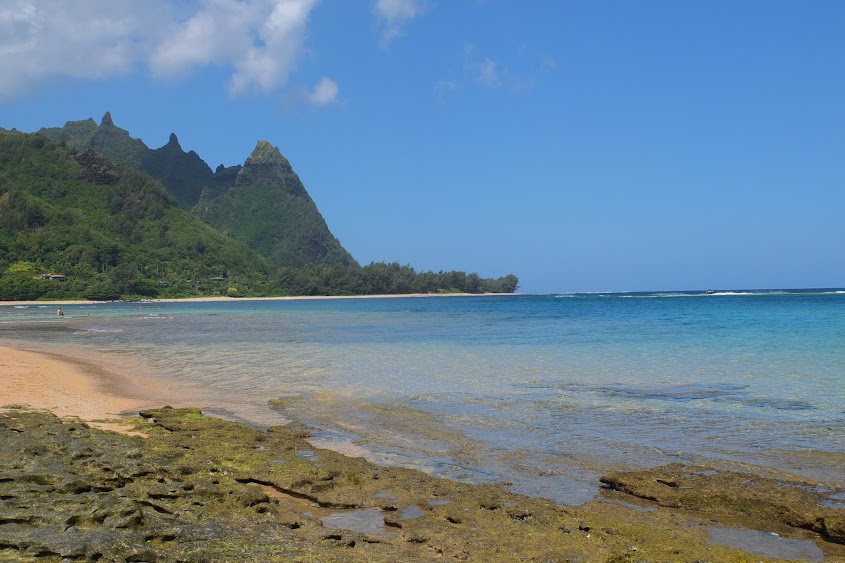 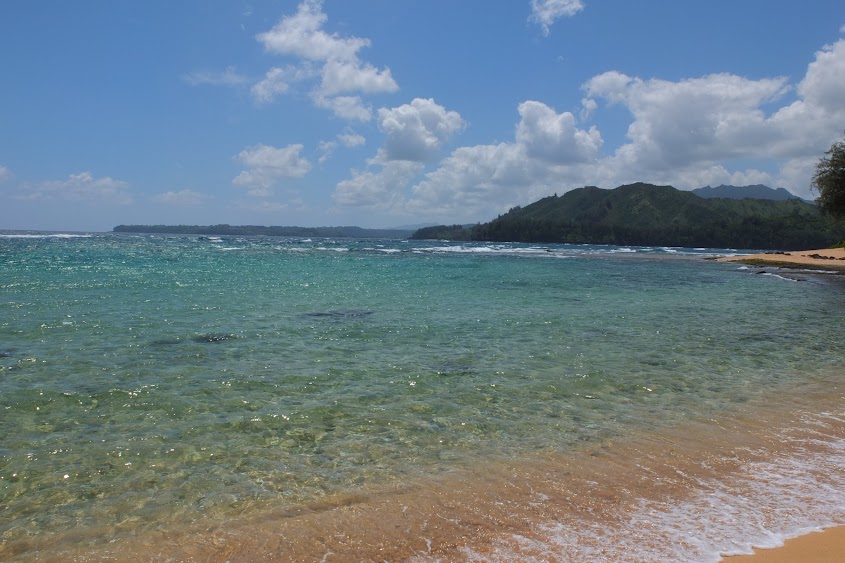 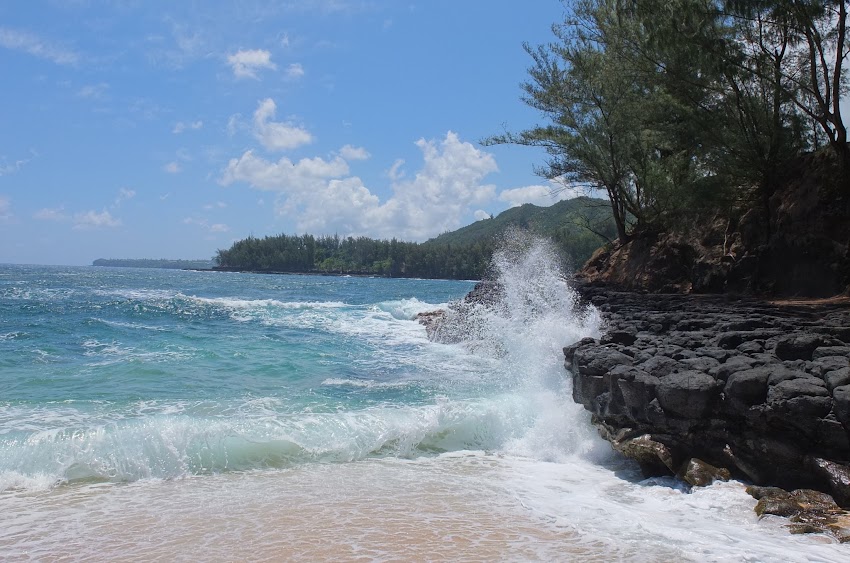 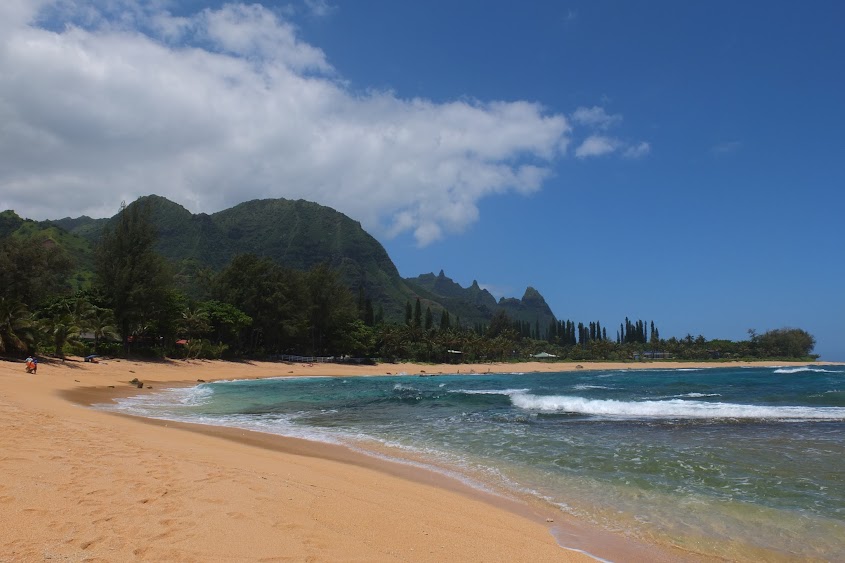 L and I walked to the right, along the beach and passed the beautiful, untouchable homes. We walked until we couldn’t walk anymore. The beach was empty (no access or facilities) and the views were all-consuming. Could this day never end? After another swim, we headed home. The sun and waves were tiring us both.  That and the crowds really poured in in the later afternoon. 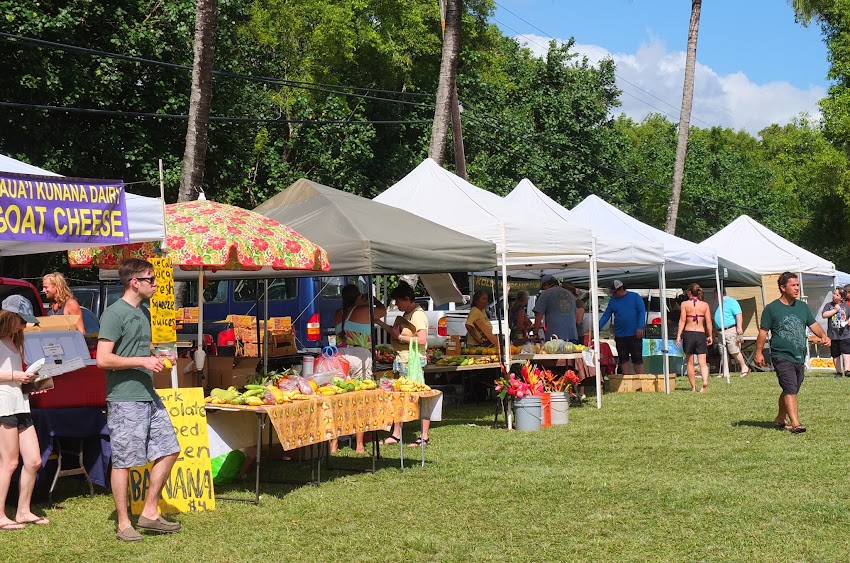 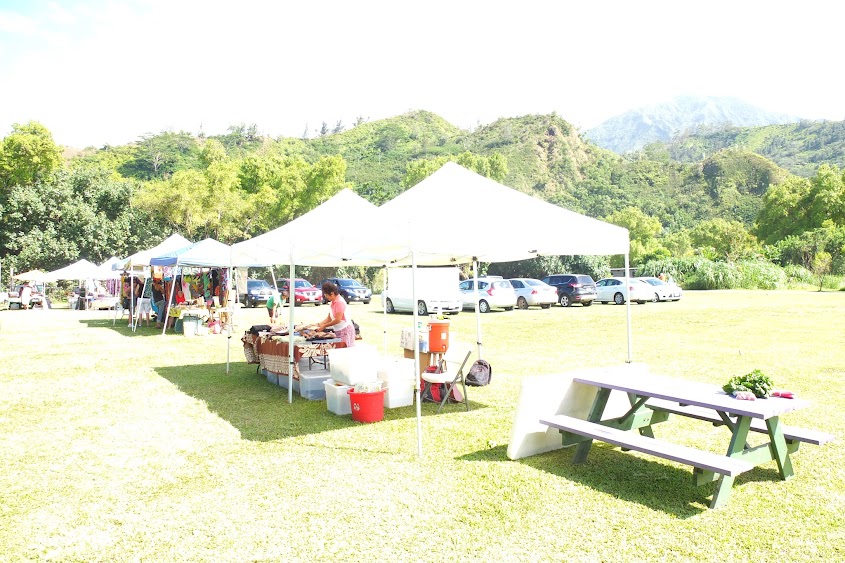 On our way back, we ran into the lone farmers market we’d end up finding. Very close to closing time, we were greeted with discounted produce and vendors very eager to have us purchase their products. After one vendor peeling a few for us to try, we grabbed a bag of lychee, a first for us both. It was plentiful this year due to low rain. Making our way around, we struck up a conversation with an attendant from one of the stands. She was from New Jersey, living here and working on the farm. As we later come to realize, there is a huge network of people travel around the world, moving from farm to farm. Where do I sign up?

Once home, we assemble our dinner plates and take our positions on the lanai, willing ourselves not to fall asleep in the process.

This place, these people, the lessons of this life… We are so fortunate.

The Ultimate Kauai Guidebook: Kauai Revealed This book was a holy book to us during our stay. The directions to beaches and trail heads are spot on, as are the descriptions of what you can expect at many of the sites. We weren’t as fortunate with the restaurant recommendations, though. But then again we only tried two and I’m relatively picky, so I really can’t evaluate that part accurately. Get this book.

Waipa Farmer’s Market This site has a list of the farmers markets on the whole island. The Waipa market was the only one we visited, and we just happened to run into it! We tried to get to others, but for one reason or another they were never where multiple guides said they would be! A bus driver admitted that oftentimes if the yield isn’t good, they just don’t set up. Good to know. This one is very special and worth a visit. Prices are fair and if you visit towards the end, there are deals to be had.