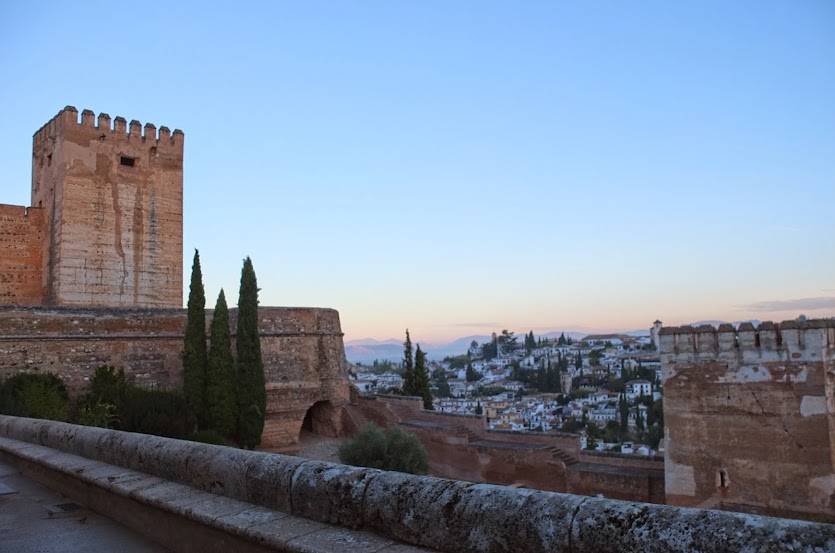 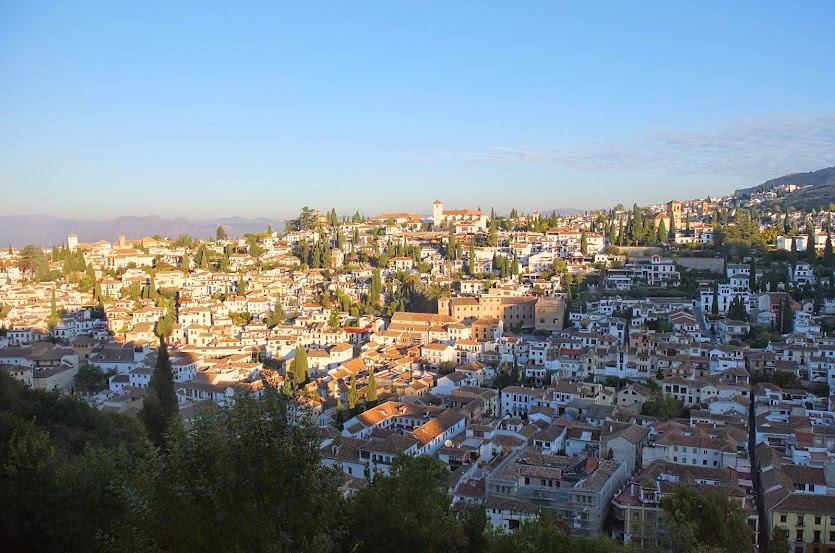 Thursday morning we woke up early to arrive at the Alhambra in time for our coveted early-morning reservation for the Nasrid Palace. A word to the wise: Bring a lunch or at the very least some snacks and things because it’s slim pickings at the top of the hill and you won’t come back down until after midday. We turned left towards the hill from the Plaza Nueva. The Sun hadn’t yet risen and the air had that ski day chill to it so I ducked into a cafe for a cafe tomar and a crossante the size of my cabeza.
We entered the Alhambra grounds at the gate of justice and were completely alone save a few guards. The views were incredible, and the Sun rose as we stood, waiting for our turn to enter the palaces. We met a kind man from Pamplona who told us of his travels through the United States and his love of Spain. Shortly thereafter we entered the palace and were just blown away. Arriving early was a very good idea indeed as there were many moments that I found myself completely alone. We followed the tour suggested by the brochure we received at the entrance but also purchased a book beforehand that provided us (mostly L) with additional background information for each magnificent room. 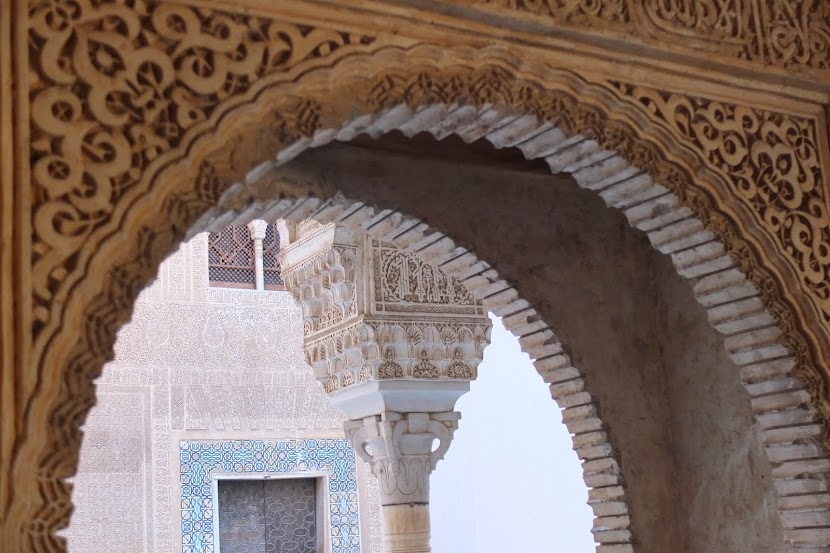 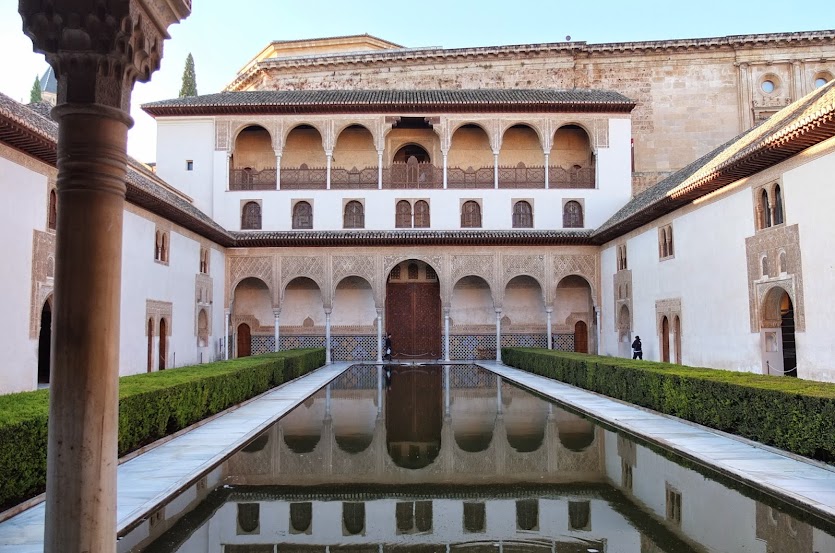 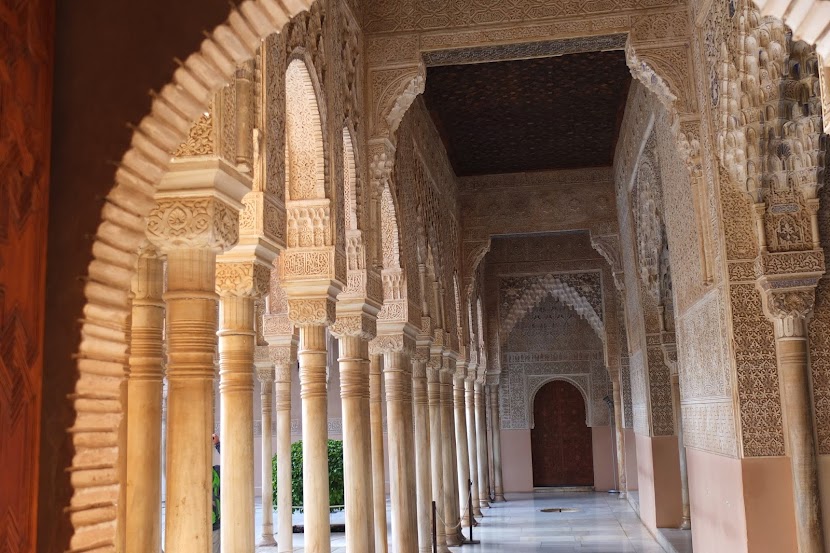 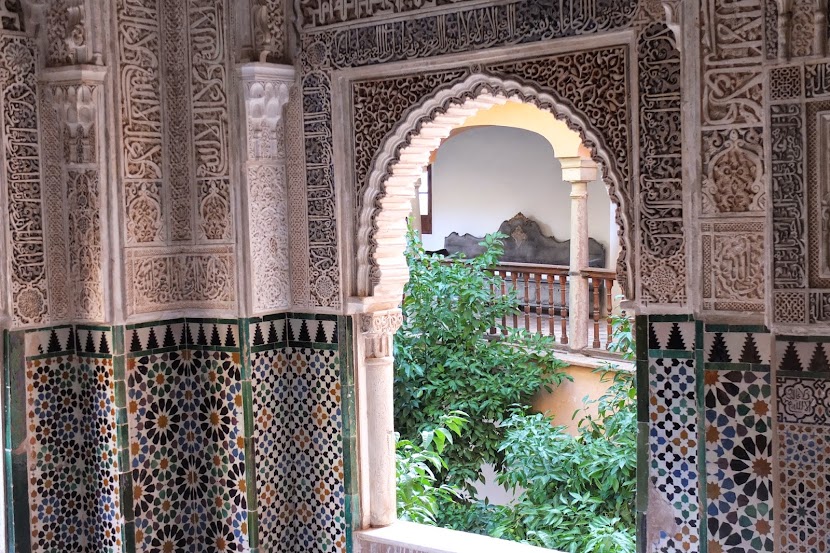 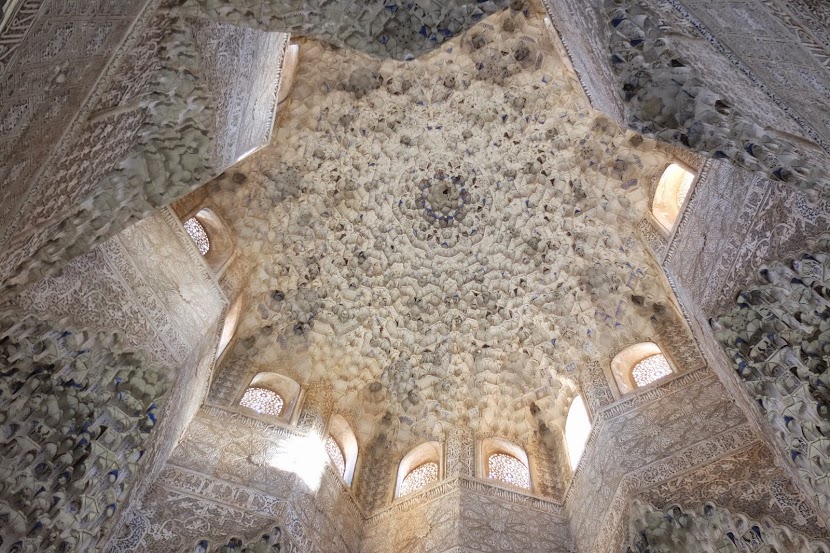 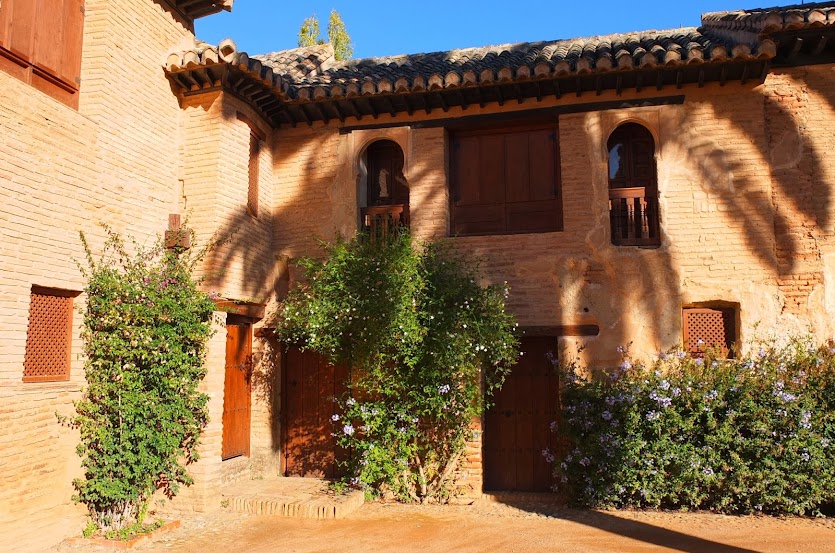 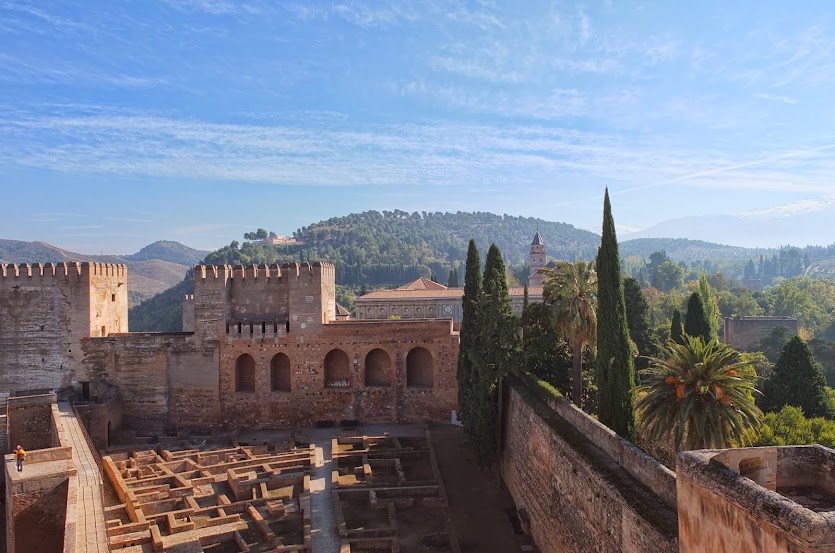 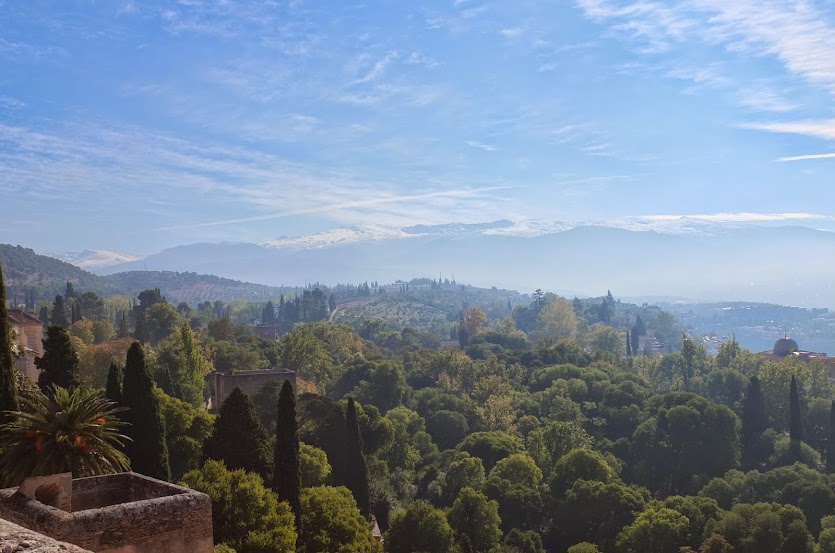 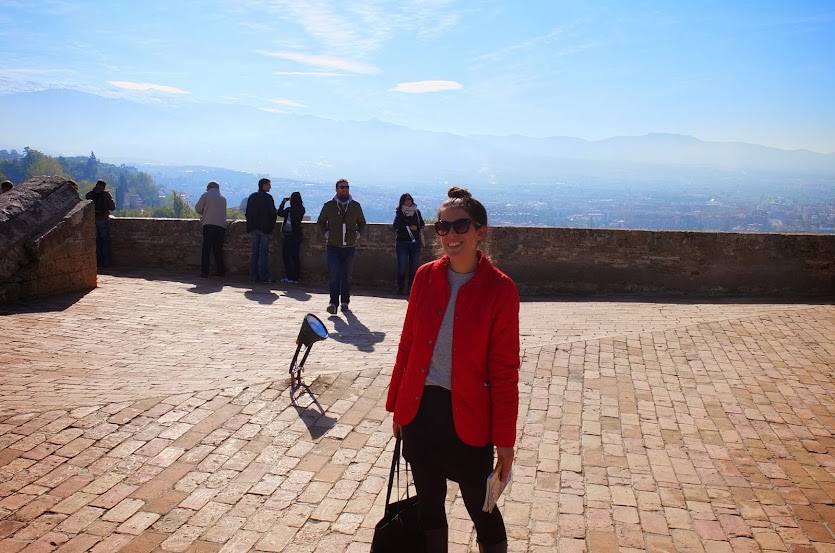 The Alhambra is the large complex and within it are multiple sites to visit. The Nasrid Palace is what you came to see-the unbelievably intricate designs and mathematical mastery creating an otherworldly experience. My camera was dead shortly after noon; It was that magnificent. After visiting the  palace we moved on to the remainder of the area around, including stunning overlooks that included the valley and Sierra Nevadas in the background. It created a sort of Eden-effect, if you ask me.
In case you’re curious, check out the map here. We journeyed through the wood to the Generalife Gardens. But first we ducked into the open-to-the-public parador that serves as a beautifully historic hotel within the Alhambra. What a ride it would be to stay here! If you don’t mind intruders like us, that is. 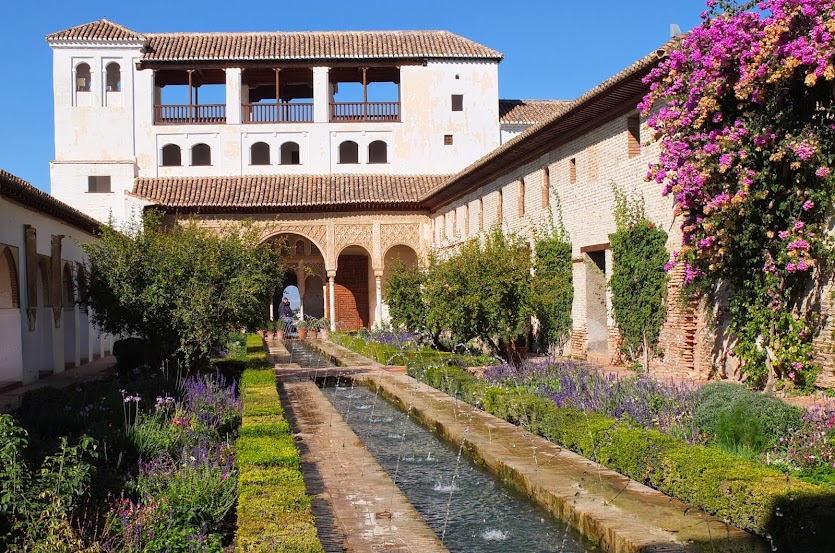 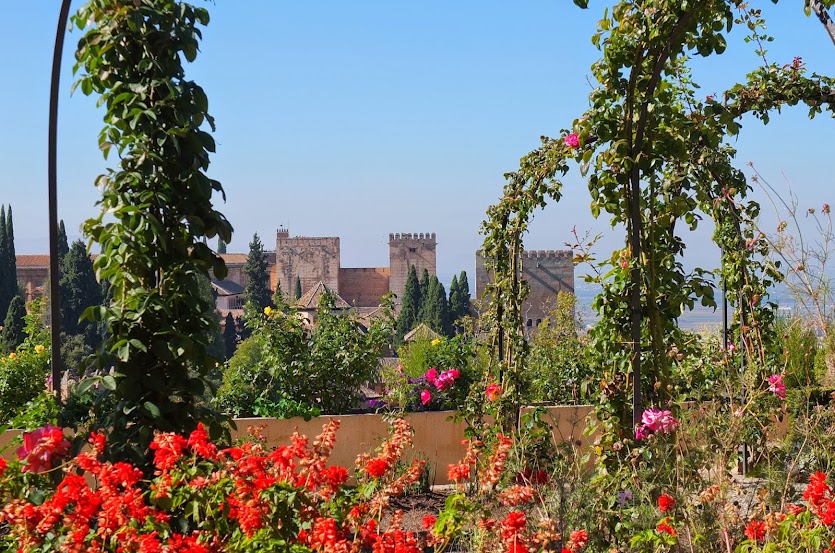 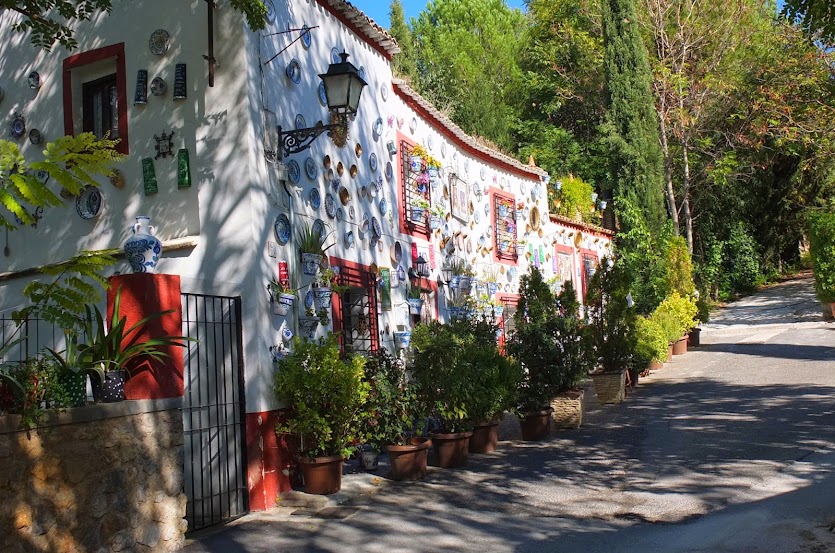 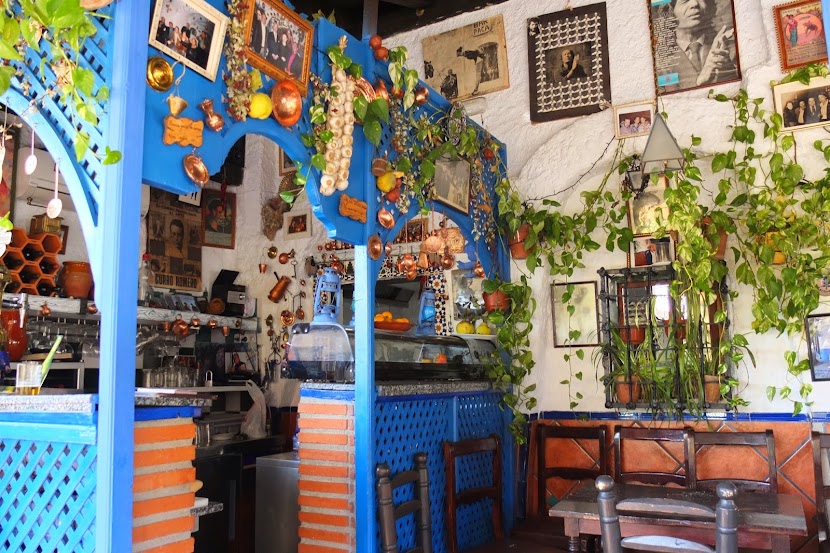 The flowers and fountains created such a sense of calm and we sashayed from site to site, soaking it all in. In an effort not to backtrack, we cut across the wood to arrive in the Sacromonte, best known for the cave dwellings that are still inhabited by original inhabitants and, further out, hippies that you can’t help but envy.
We walked up Camino del Sacromonte and gawked at the homes and searching for a special restaurant I was determined to find at #83. The owner and friends were seated outside, cigarettes and drinks in hand, and I was sure we had the wrong place until he asked para comer? I nodded and up we went to the small restaurant upstairs. We had one of our favorite meals here- I had a Plato del Alpujarra filled with blood sausage, chorizo, pork, eggs and potatoes drenched in local olive oil, and L something similar that I just can’t remember. When we ordered a coffee with our dessert we were told no coffee en el sacromonte and were promptly brought two complimentary glasses of  an anise flavored liquor instead. Fine by us.
We left and passed our apartment in search of the flamenco club that opened to the public on Thursday nights. We arrived without problem but couldn’t find our way in. Finally, a older gentleman with a very sweet face opened the door and greeted us. Basic Spanish is required but all attempts are certainly welcomed, so don’t let that deter you. I certainly didn’t, despite my confusion of nombre for number and only recognizing my error when the owner looked completely lost with my responses. Regardless, I was determined.
Reservation made, we continued back to the apartment and poured a couple of glasses of wine and relaxed for a while. The apartment is perfect, we think. Despite being even smaller than our current space, it’s plenty for us. We assembled a modest meal after our indulgence of a lunch before heading over to the flamenco club. 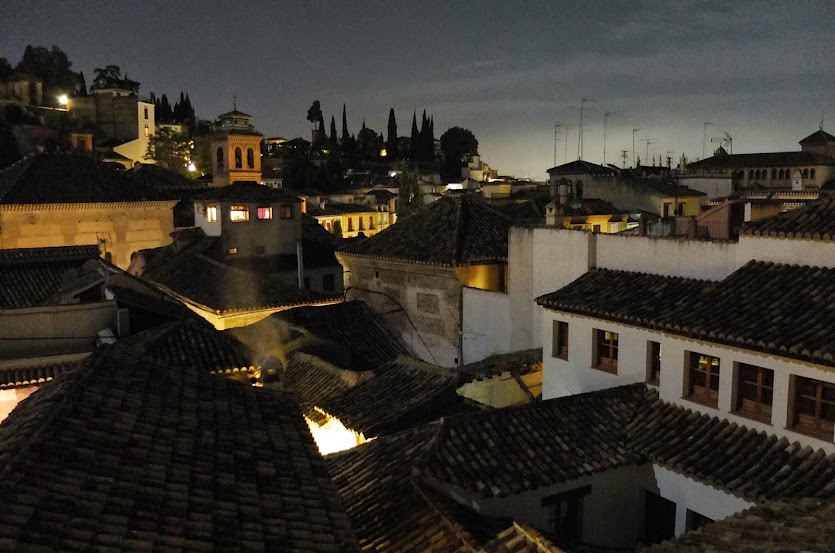 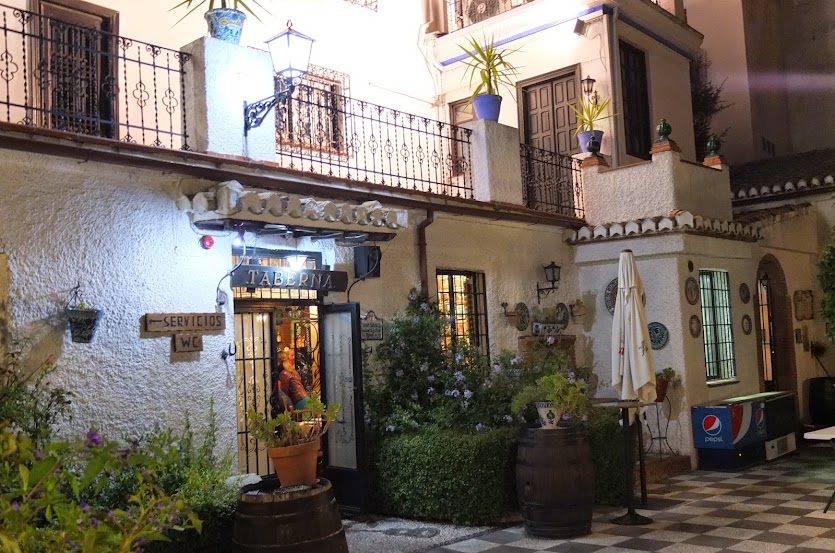 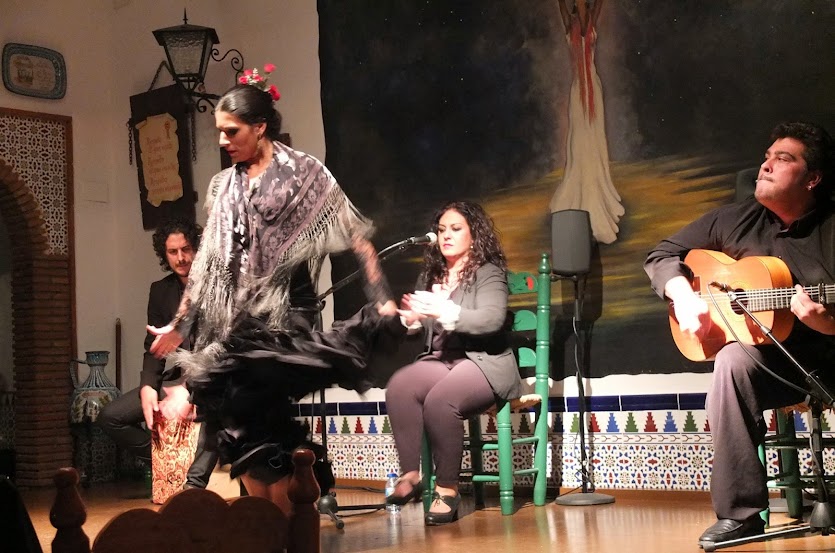 We arrived to a bustling bar filled with mostly friends and family of the performers as well as just enough tourists. We ordered a drink and before we could finish were ushered across the courtyard to the large performance hall. We were greeted, paid the 20E for the two of us, and were escorted to a table one away from the stage. I was in heaven.
There was a long table filled with the family mentioned earlier, who I followed for appropriate etiquette. They took a few pictures, hollered Vale! in support, and gave a shh! to guests who insisted on talking throughout the dramatic performance. I  was stunned by how beautiful it all was-the guitarist, so purely talented and together with the cantor, bass and dancer, creating something so representative of all that Spain. I don’t know if it was the continuous stream of wine or the mood, but it was some kind of magic.
God, what an amazing day. It was one of those days you think couldn’t possibly be real because it’s just  that rich. Well after midnight we walked the silent streets of the Albaycin back to our apartment and drifted into a deep sleep while the city kept on.
addresses you should know:
The Alhambra
http://www.alhambra-patronato.es/
Must reserve ahead on Ticketmaster ES
Casa Juanillo
http://www.casajuanillo.net
Camino del Sacromonte, 83

2 thoughts on “Spain: The Alhambra and the Beat of Flamenco”