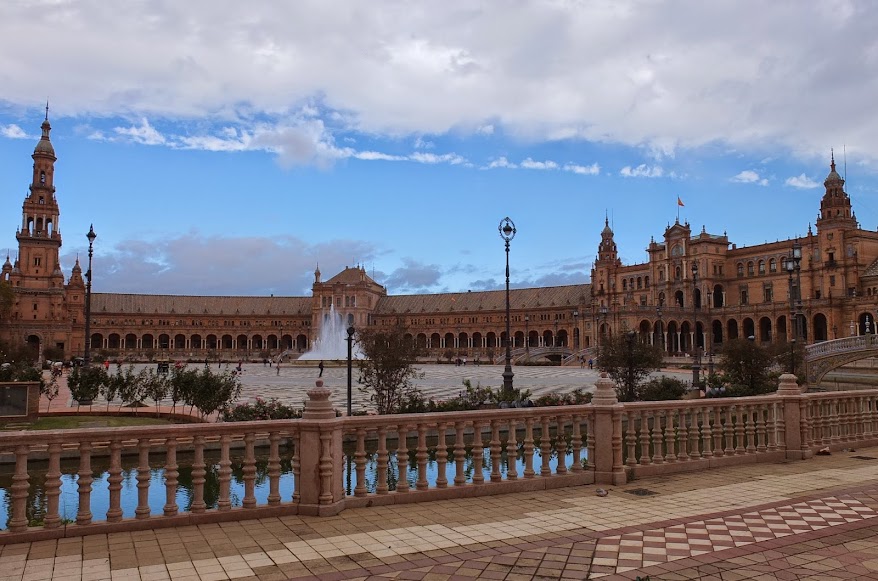 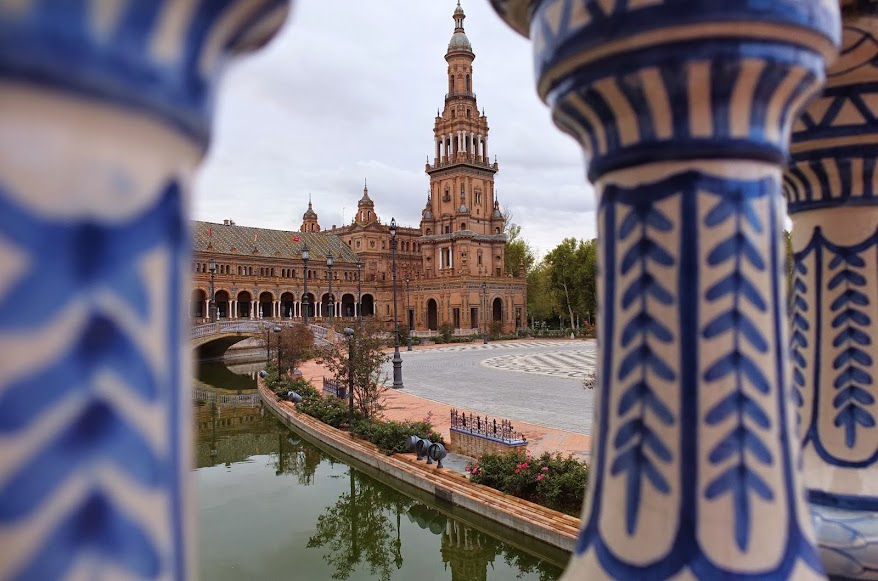 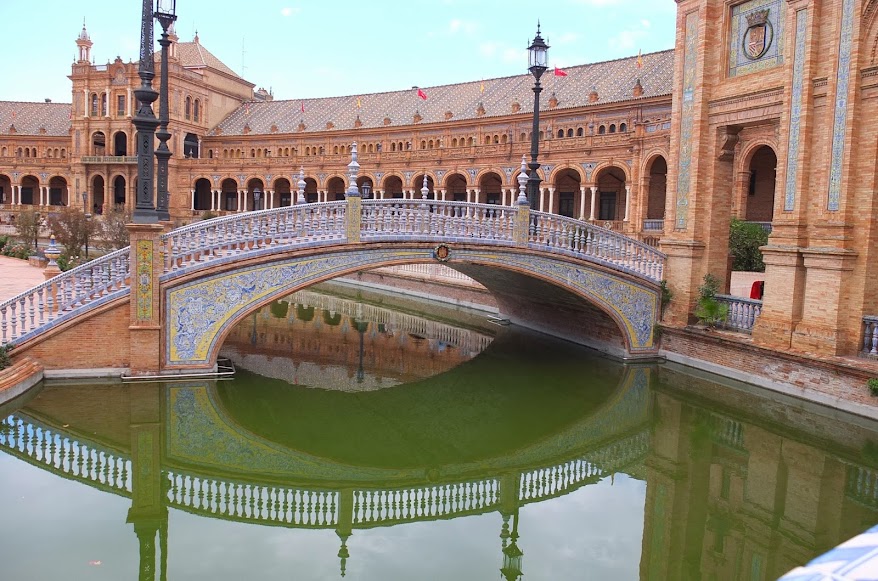 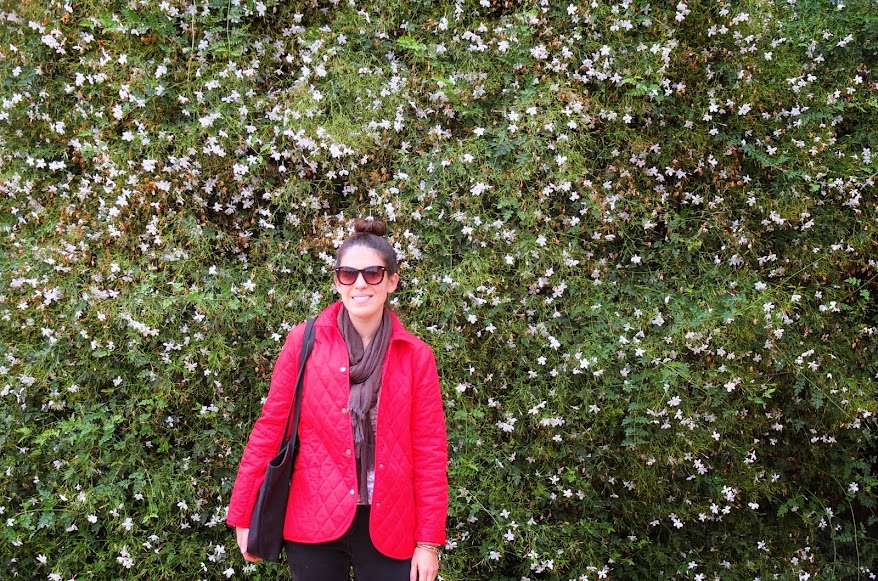 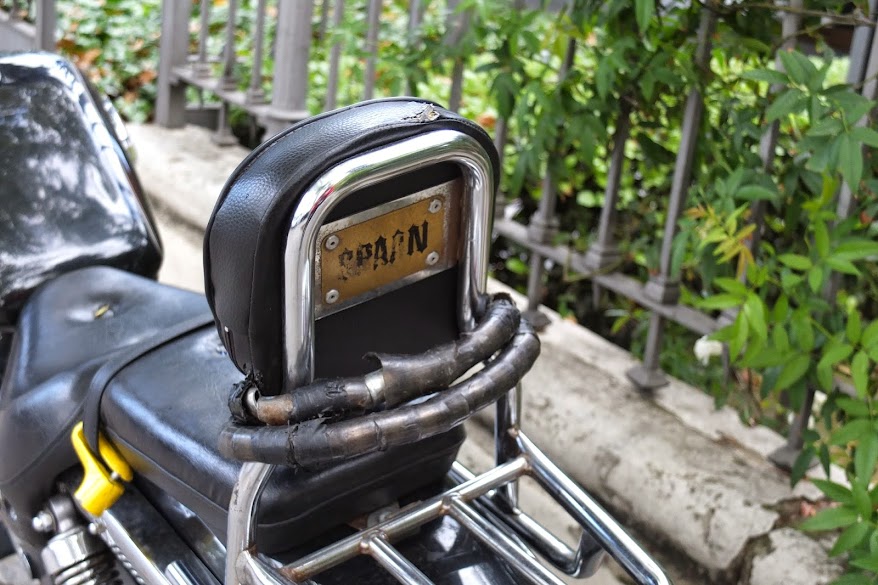 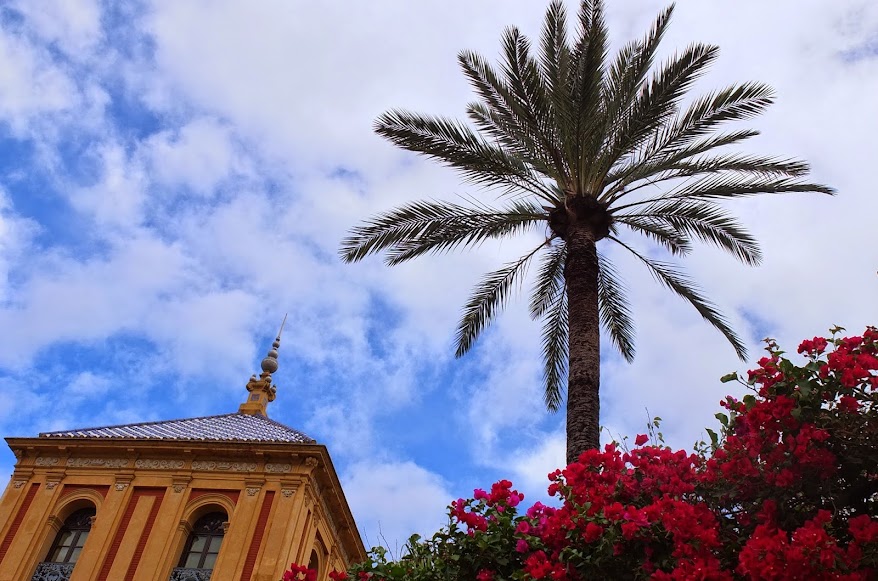 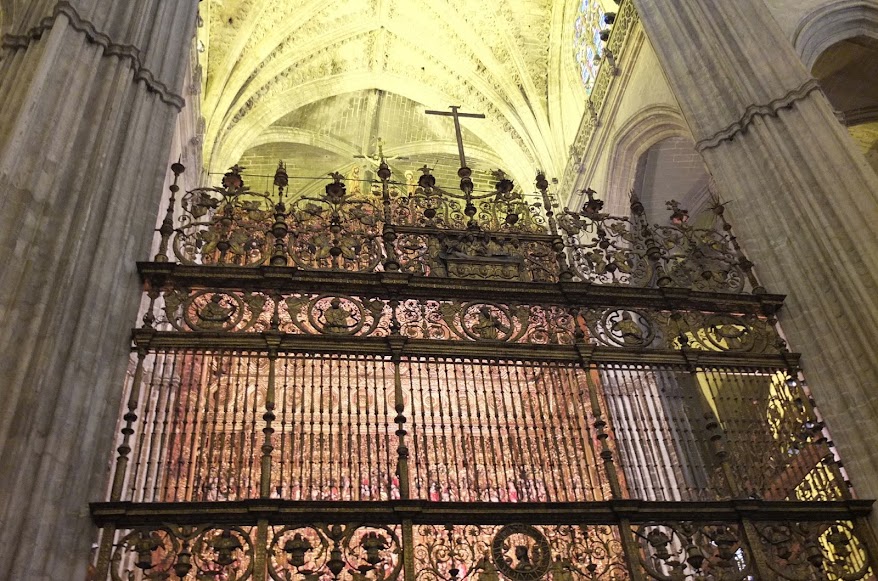 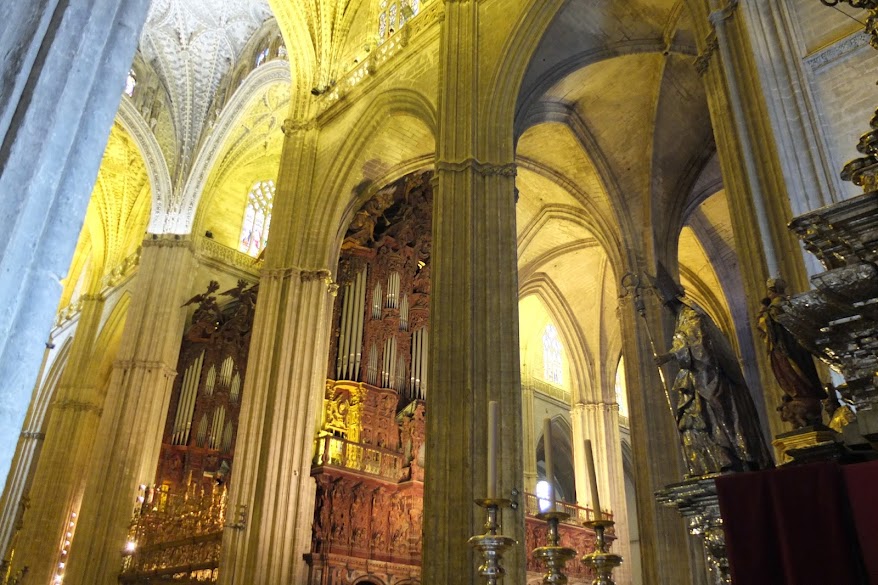 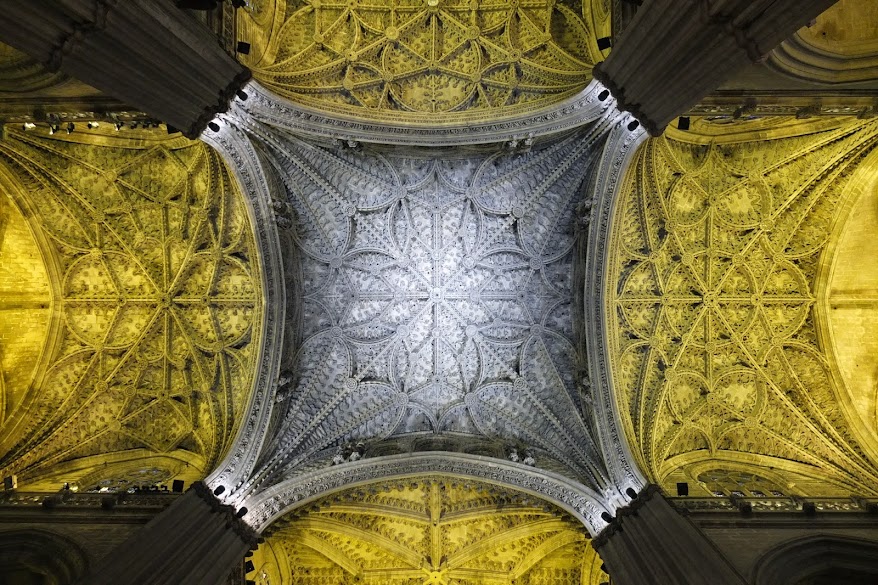 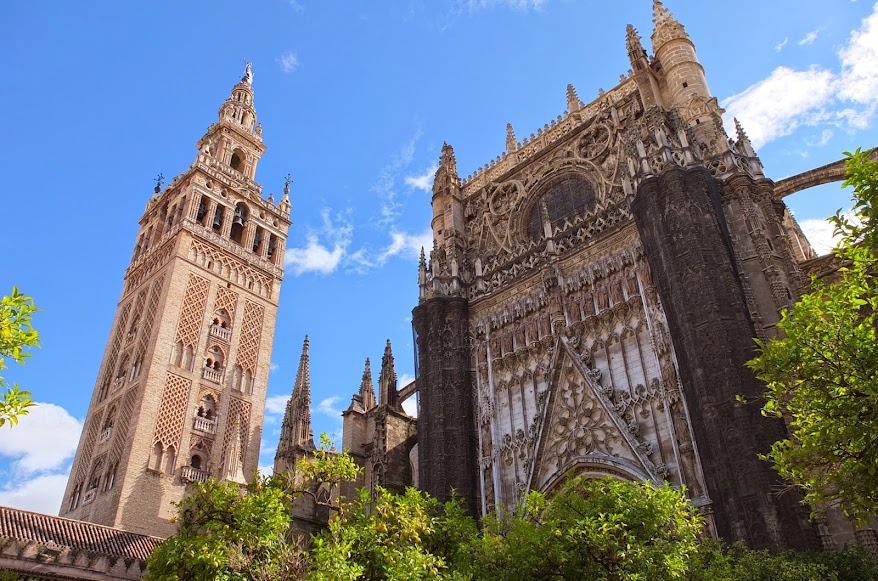 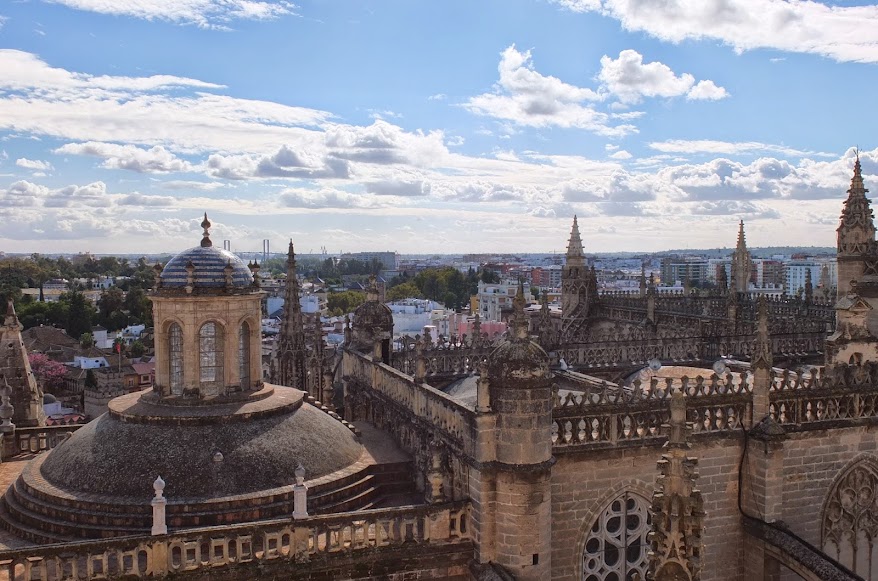 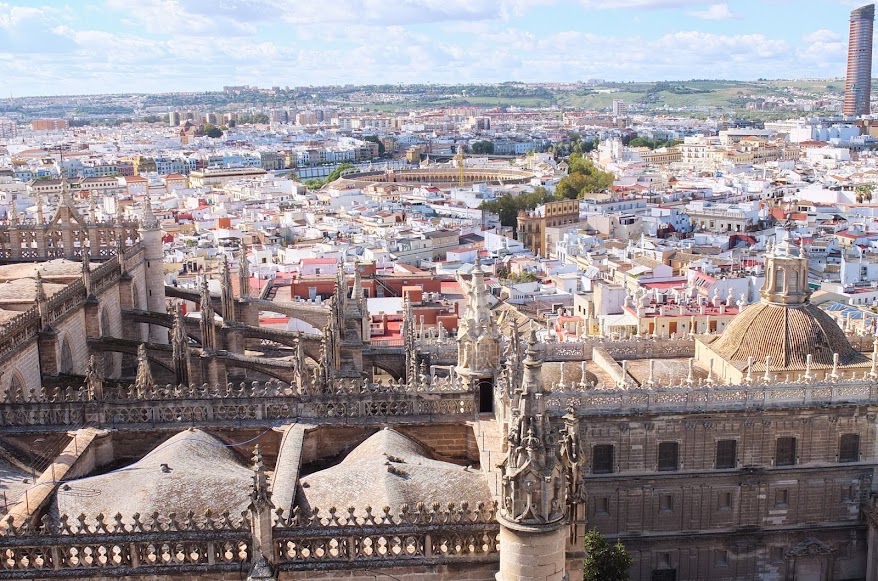 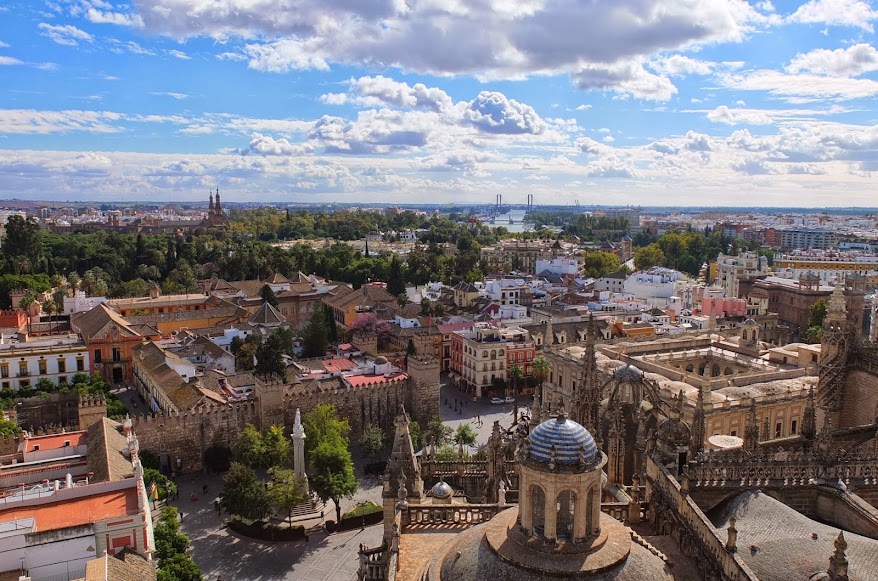 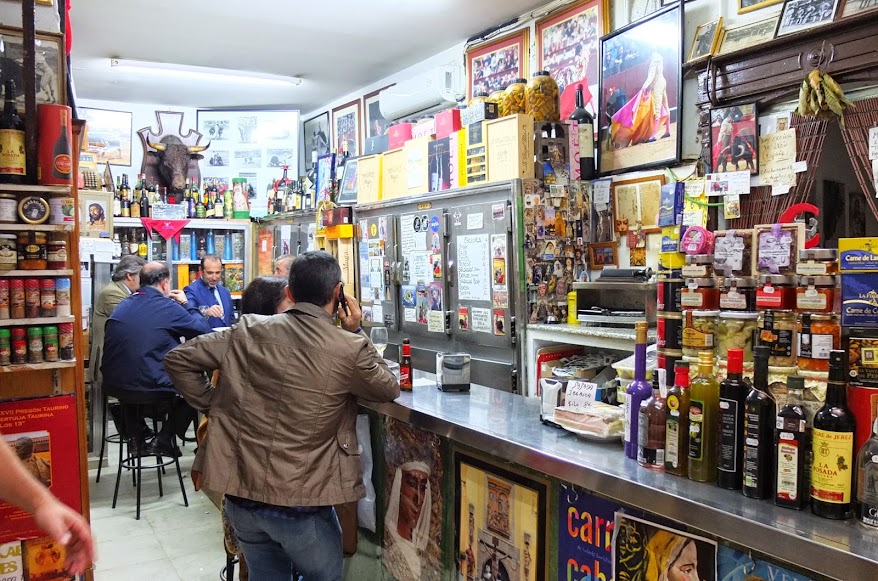 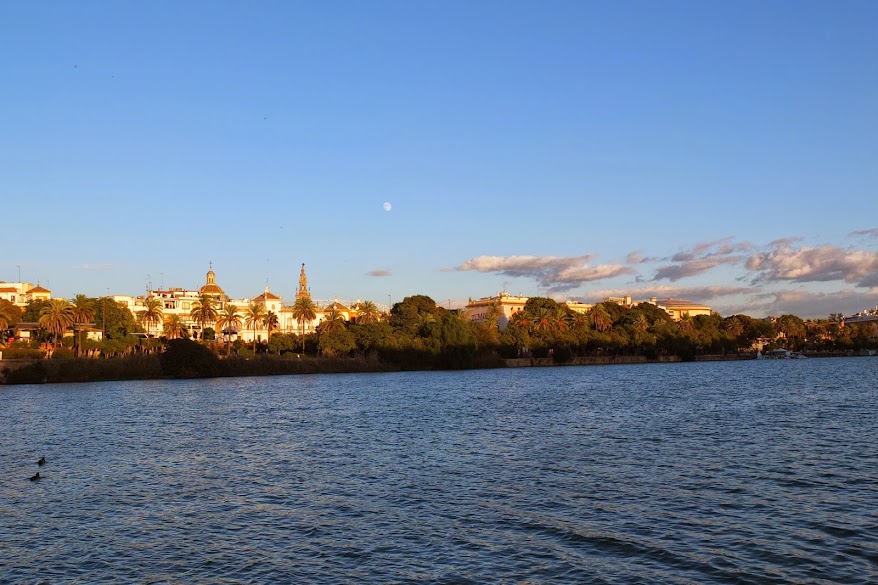 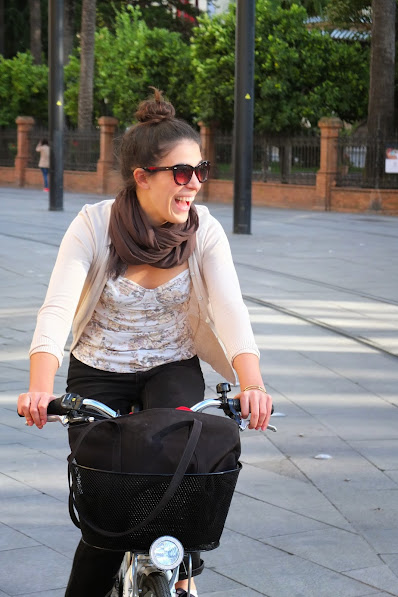 On our second day in Seville we got a bit of a late start. But by now, we were not phased. We walked into the city center, passed the Plaza de Espana, a favorite by now, and on to a cafe across from the cathedral. After a cafe con leche, we got in line and were ushered into the magnificent cathedral.

Oh, I could have spent the day staring at the ceiling above the main altar! We passed Columbus’ supposed resting place and the mighty organ in the center before passing through the courtyard filled with oranges and venturing to the top of the tower for the most incredible views of this fair city.

After, we wandered into town in search of something to fill our stomachs. I need to declare that I never did figure out just how to navigate Spanish dining hours. Almost every time we ventured out to find a meal, we were too early or too late. What gives? Anyway, this afternoon we wandered through silent streets of beautiful Santa Cruz and found ourselves at an incredibly charming abacería- part grocery store part tapas bar- Abacería Casa Moreno. I wish I could recreate this stateside. It was perfect. In the front fine cheeses and meats are sold along with specialty food items. In the back there is a bar and all of the aforementioned items are served tapa or racion style. After tapas and a couple glasses of wine, we found our way to the market where we found the lovely company, Sevilla See by Bike. For 19E we each had a bike for 3 hours, complete with a basket for me and locks for us both.

We were off! Little did I know Seville is one of the most bike-friendly cities in Europe. There are bike lanes everywhere, so we took a loop around the entire city then ventured over to Triana. Ah, we were in heaven! It was such a joy to see the city on two wheels, safely mind you, and without getting exhausted.

The feel in Triana was much different, more local maybe. If we had a day or so more I would have returned. Next time.

A few hours later we returned to the market to return our bikes. The owner is sweet, genuine. He tells us of his US travels and his brother’s new life in Boston.

For the rest of the evening we wander, get lost, and wander some more. We finally find a restaurant at precisely the right time, La Brunhilda. We were a few people back in the line and locals couldn’t believe there was a line on a Tuesday night. We’re ushered in and treated to some really incredible tapas. The food is similar to meals in philly, which isn’t altogether a bad thing since Philly is a culinary mecca as far as I’m concerned. But! We were looking for something a little bit more unique. Make no mistake though, it was really good.

Before heading back to the hotel, we stopped in a restaurant recommended by the bike shop, Pepe Hillo. There are bull heads everywhere, it’s heated by large space heaters and the wine is plentiful. The food wasn’t anything extraordinary but we lingered for hours before making our way back to the hotel.

It’s our last night here. I think I’ll recommend Seville to everyone I know. It’s beautiful, clean, and rich in beautiful and welcoming people, culture and food.  It’s a must.

Places you should know:

4 thoughts on “Spain: Sevilla by Bike”