We woke up early this morning as we started getting into the groove of staying here. I quickly put breakfast on the table and we layered up for our second journey around the island. The wind whipped and the cold quickly set in as we began our trip north to Apollonas. We zigged and zagged on the most ridiculous of roads with the raging sea on our left. It’s not advisable for novices to take this road …just take a look at the map first… those sharp turns don’t lie. But as with most difficult journeys the reward is so great. The views were spectacular, stunning, even, something out of a storybook to be sure, or a travel magazine…whatever suits your taste.

We soared, though, through the rural towns with one gas station and nothing else to see then back up to the coast again. Luke pressed the accelerator as far as it would go at times and we still went forward at nothing faster than a creep.  I kept my eyes on the sharp turns and was the lookout for oncoming traffic. Good thing, too as one of the last turns before our final ascent to Apollonas was greeted by an unaccompanied herd of goats in the street! We moved slow and they parted towards their feed trough. I didn’t see them, but Luke tells me there were many other single goats along the way, a foot or so from us as we zipped by… some lookout! 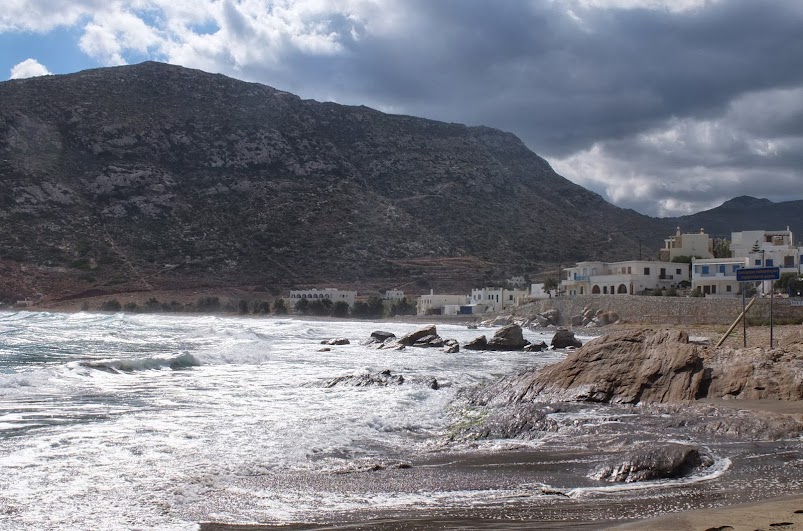 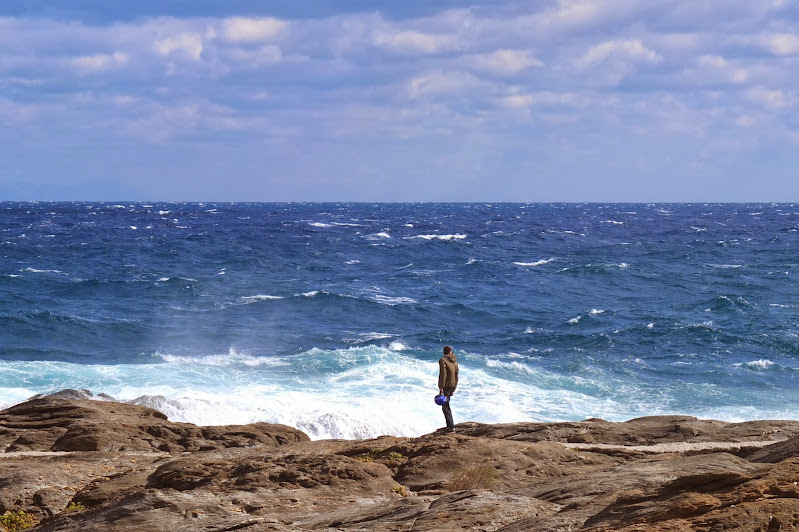 At last we arrived at Apollonas, the sky finally breaking and the sun falling on us in spurts. The town is the summer spot of your dreams, we hear, but for us it was a sleepy fishing village with powerful scenery. We walked around a bit, walking streets and buildings of pure white marble. The beach was very small but perfectly appointed with cafes, restaurants and the like. It’s like a beach spot of the ‘50s…That is, Greece in the ‘50s so prepare yourself for facilities (read: restrooms) that follow in the same theme…you’ve been warned.

At this point we had to go higher in altitude to come down a bit and tinges of misery crept up on me. At a point we were level with the wind turbines that powered parts of the island and there was nothing higher than us and them at that very moment. My hands were in such pain as were any other exposed parts of my body. If I had to guess it was below freezing by quite a bit. Once we began our slight decent I perked up a bit. We passed through apparent ghost towns with nothing more than a phone booth outside of town. We approached the town of Koronos from the wrong direction, on a side road that went straight down so after a moment of taking it in we turned around and headed back, slowly but steadily, well mostly steadily. 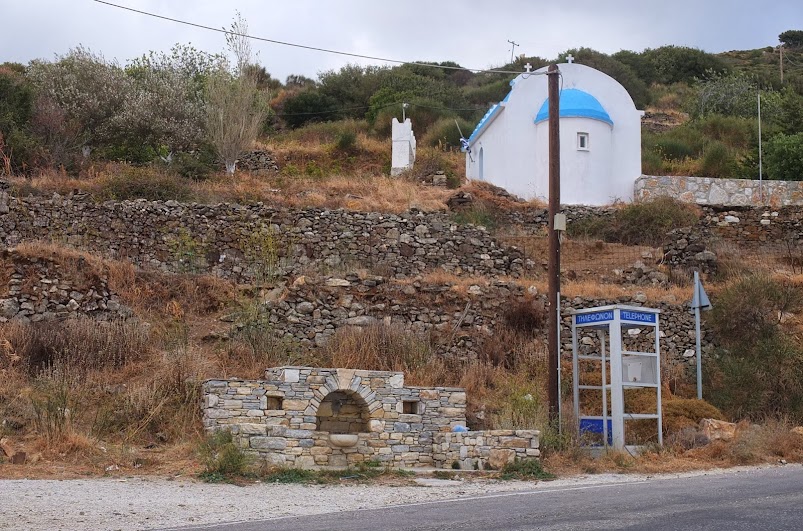 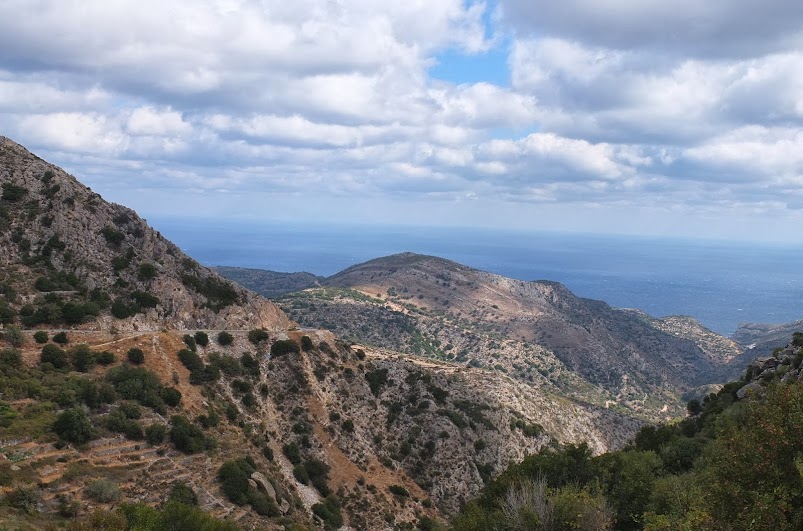 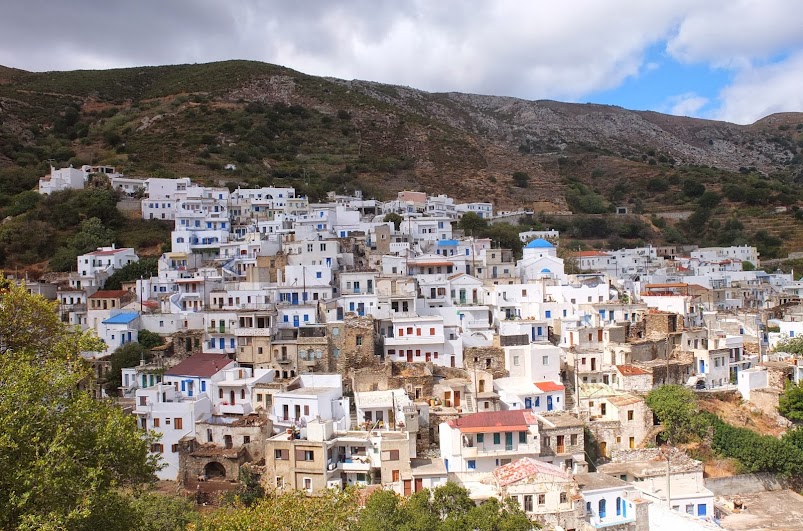 We arrived later, the skies darkening again, at Aperanthos, “the marble city” said our hotel’s owner. We arrived and yes, indeed, it was a city of marble and such modest grandeur if that’s a thing. We walked through the streets, peeking in the windows and just witnessing life as usual…what I love most about Europe. Unable to take the cold anymore we arrived at a restaurant featuring local meet. We walked in to an empty restaurant and were welcomed with a  thwack! thwack! As the owner butchered the meat for the day’s service. We rested here a while as the restaurant filled up, one of the only ones in town that was completely indoors. We had a delicious lamb in lemon sauce dish with bread, always plenty of bread. 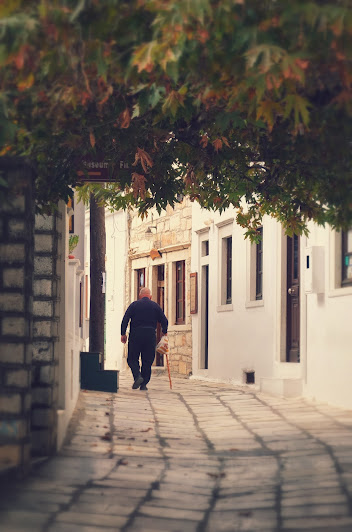 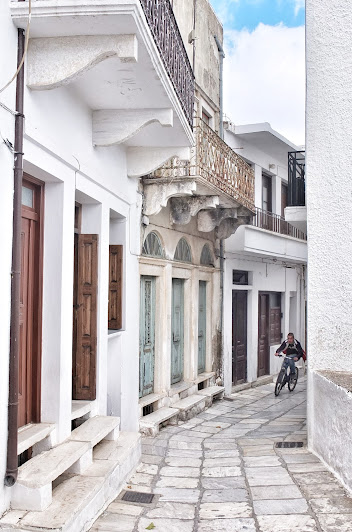 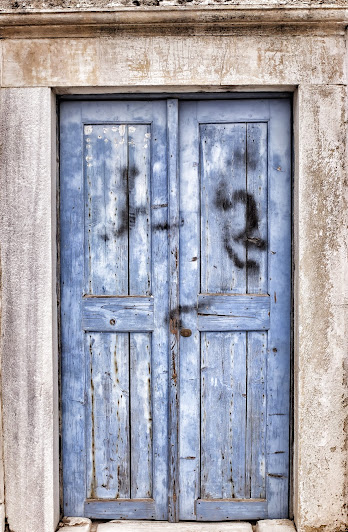 We boarded our little vehicle, becoming my preferred mode of transport by now, and I latched myself to Luke’s back, my hands under his windbreaker to keep warm. He went as fast as he could, familiar with the roads by now, descending at a rapid rate, past Filoti and Chalki into the warm, fertile Tragea Valley. The air was so much warmer now, the sun shining bright and the smell of citrus prominent as we sped up once we spotted the sea.

We arrived at Alyko Beach and after parking our bike in a sort of makeshift spot, I excitedly laid out our towel and ran into the water. The air was too cold for a swim but I was too excited to stop. The beach was like nothing you’ve seen, a natural wonder with crystalline water and trees and dunes all around. We rested on the beach for a long while, along with three other couples, one with my dream VW van, all nude. Prepare yourself for that. 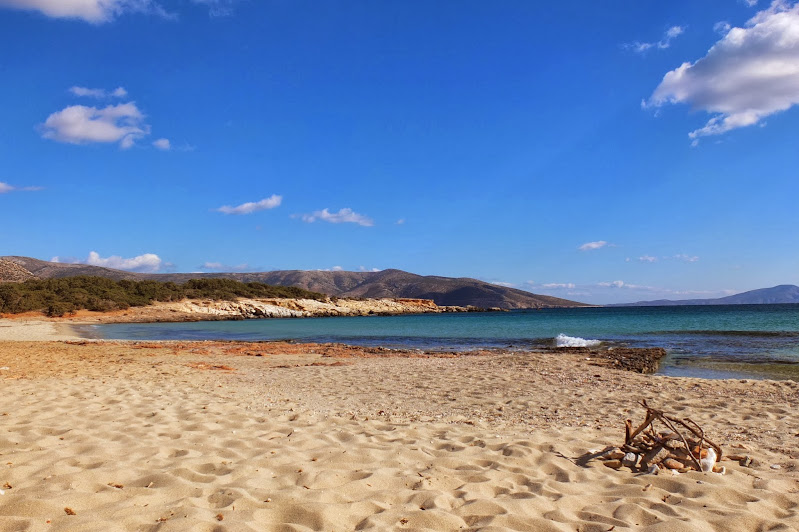 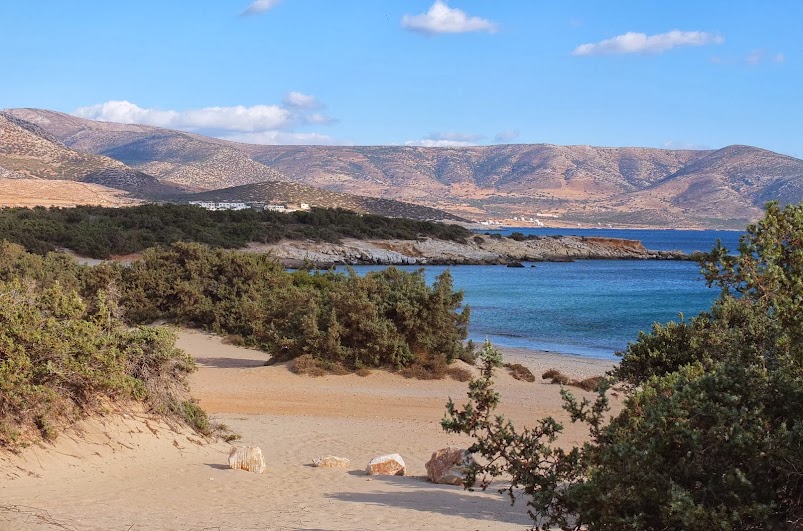 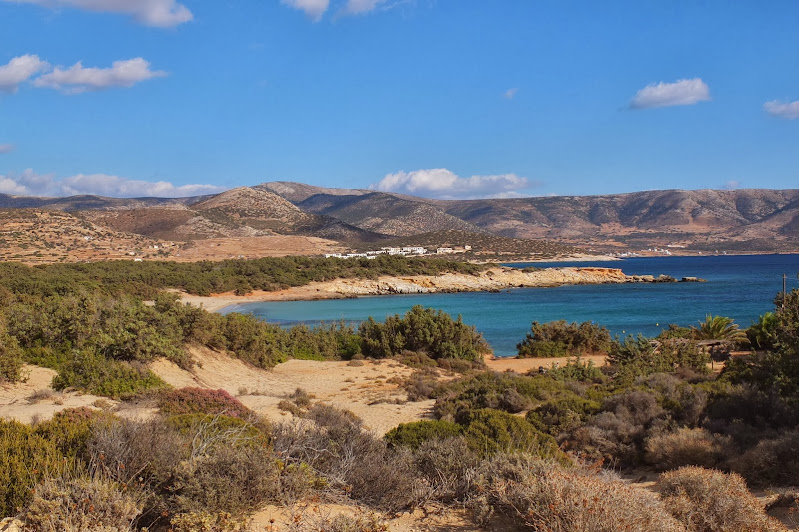 We took the coastal route back, stopping at a couple other beaches but none quite as beautiful in that quintessentially Greek way as the last two.

We landed on empty still far away from town, and a bit of panic set in along with the excitement of it all. We spotted a sign about 10 miles outside of town and pulled up before I could breathe. 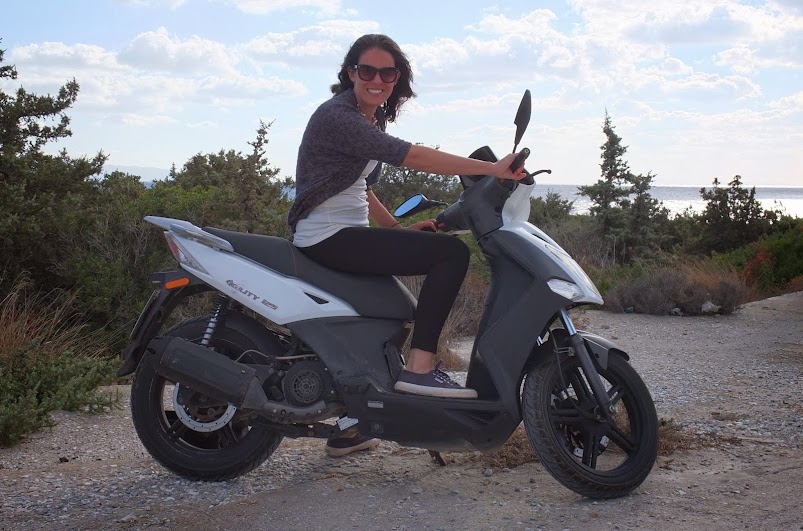 Once in town we delivered our bike very pleased with our success. In two days we went to the Northern, Southern and Western most points of this special island, what we saw making us hesitant to leave. We were greeted at our hotel by the owner and her father, he bringing out cheeses and wine, and a special little bouquet of flowers for the women. God, how I will miss this place.

This night, our final in town, we decided to re-visit the wonderful restaurant from the night before, Maro Taverna. Exhausted from the progress of the day we ordered our wine, a Dako salad and large chicken dish, finishing up with the tradition spirit, raki. We smiled as the couples on each side of us asked the waitress to bring them what we were having. 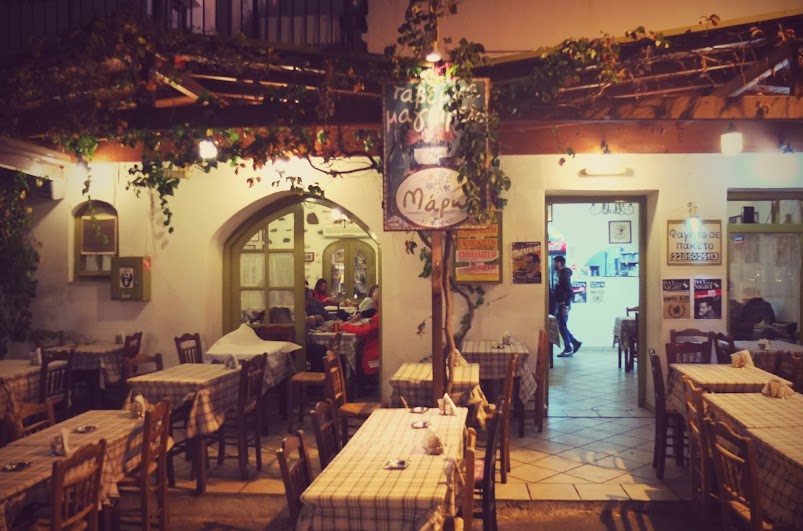 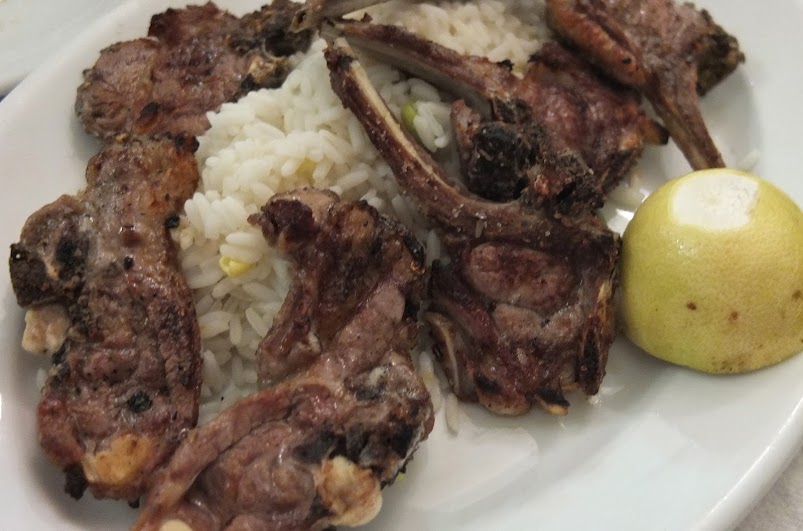 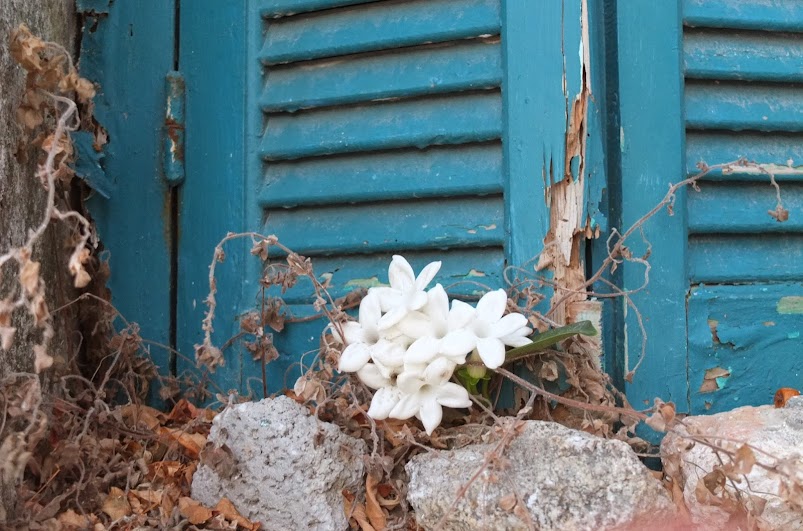 Hours later we wandered back, so different from the first few days of getting lost and frustrated with the tiny alleyways without street names, this time finding such joy in it all. Now, that it was time to go. 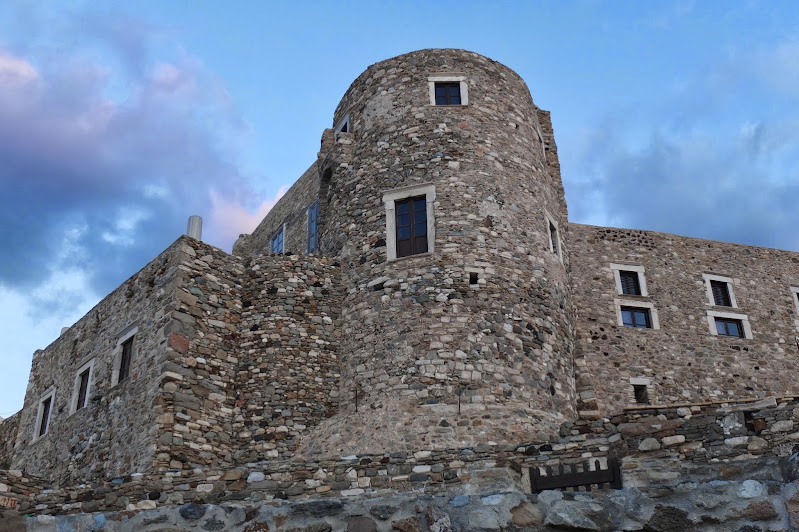 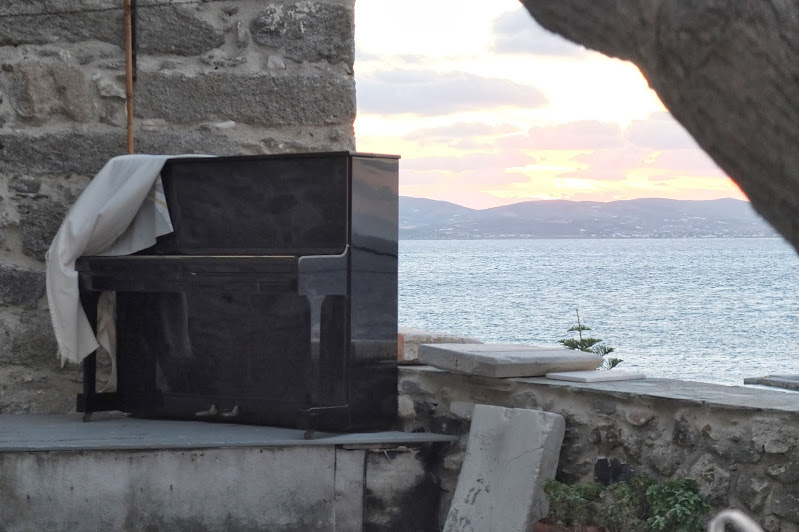