It’s a unanimous feeling that this day was the best day of our respective and shared lives thus far. As workdays sometimes drag on in their monotony, I think back to this day, imagine myself on that beach and all is well in my little world.

We woke up and fixed a beautiful breakfast spread in my little kitchen after I figured out the hot plate’s quirks. We opened up the map of the island fully and began charting our course for the day. We planned a day of visiting mountain towns and ending at the sea but there was really no plan at all as there are two main roads on the island and whichever we took would take us on an adventure. 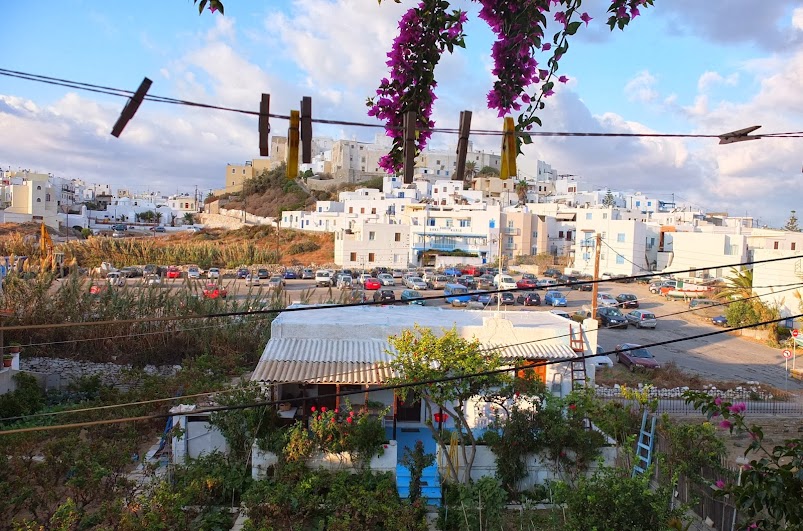 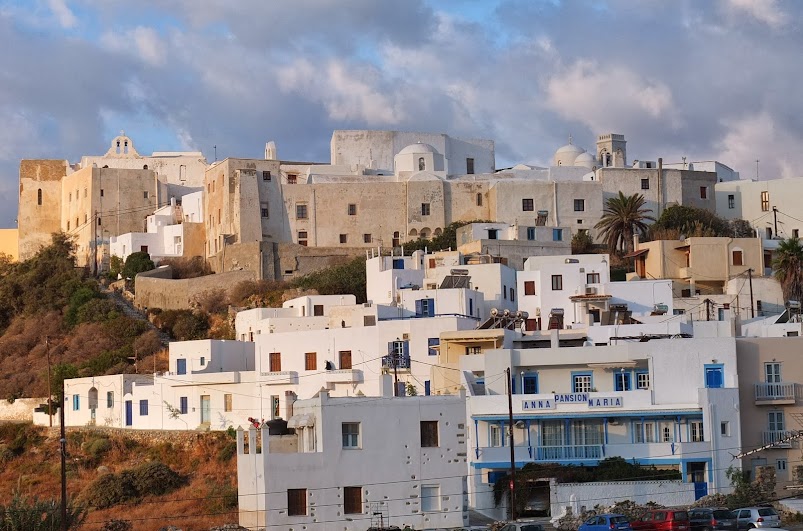 We walked town the winding street of Chora to find a scooter rental. We settled on Fun Cars and an offer of 10 euros per day, including all insurance, from a very eccentric Australian expat. Thankfully we took proper precautions and got an International Driver’s License for Luke including his motorcycle license, since the only one they had left that would fit us both required it. I was handed a bright pink Italian helmet, stuffed my purse in the small compartment under the seat and we were off.

We followed the signs pointing us to “villages” and we found ourselves rather suddenly in the middle of dramatic mountains. We stopped when we stumbled upon a bright white church in the middle of nowhere, you know the kind. We continued on and made our first proper stop at the foot of the Tragea Valley in Moni. It was so serene…exactly what you envision when you think of a Greek village. As we looked out on the valley and it’s abundance of olive and citrus trees, the sweetest old woman came over to us gesturing that we come with her to see the fine lace this town is known for. I smiled and said thank you, though we needed to press on. 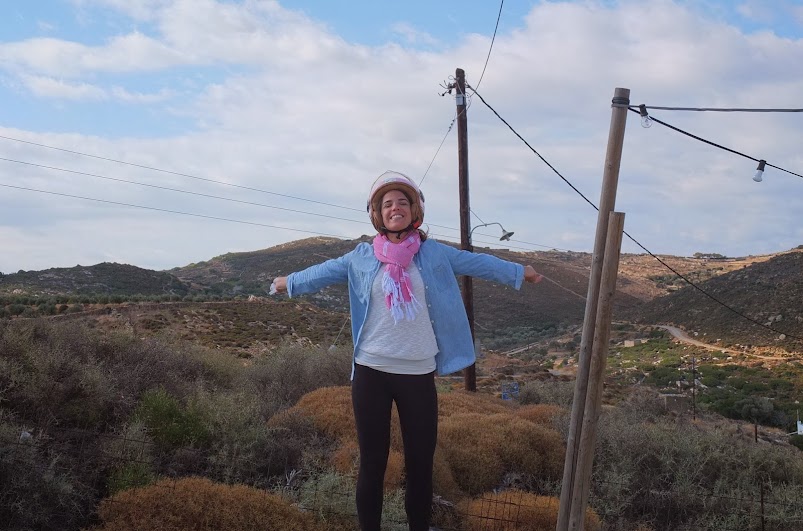 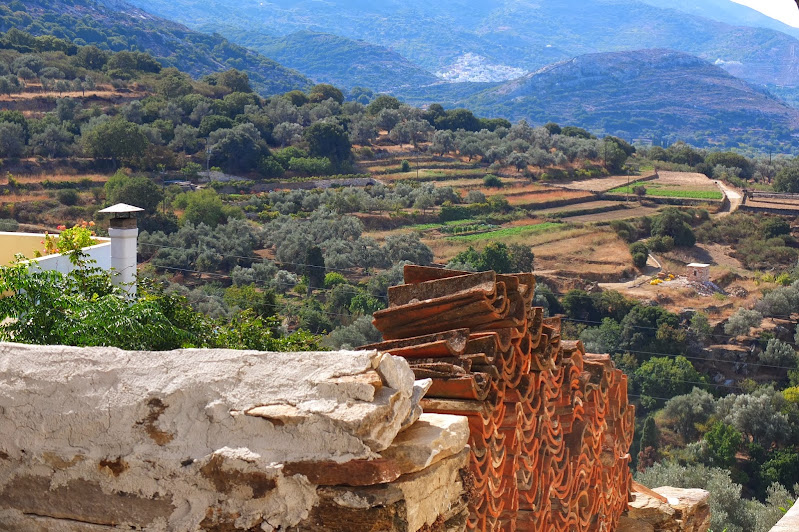 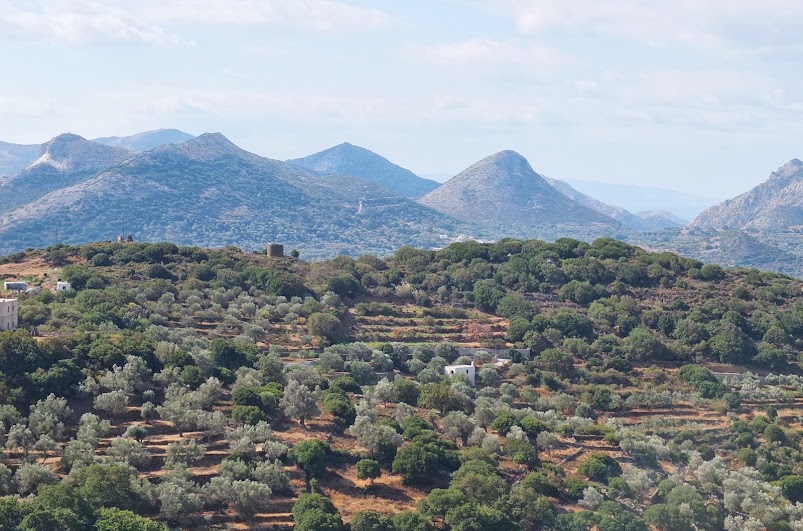 It didn’t take long for us to arrive in one of the loveliest places I’ve been, Filoti. We arrived in town and it was just so Greek. The streets were filled with local people, mostly women as the men were packed in the coffee shops discussing who knows what, politics, women, gossip? We parked and began wandering about this perfect mountain town. We stopped in a beautiful coffee and pastry shop and were given the royal treatment by the kind owner. He brought us a huge slice of Galatoboureko (milk pie) along with our giant coffees, a rarity in Europe. We relaxed in the upstairs room, warning up a bit, as the real entertainment happened downstairs. We were startled by a sudden yelling and commotion that boomed up the stairs…only to later realize that it was only a new group of men discussing current events. We lingered for a while then paid and left after a short exchange about where we were from and a huge smile as a result of responding Philadelphia. 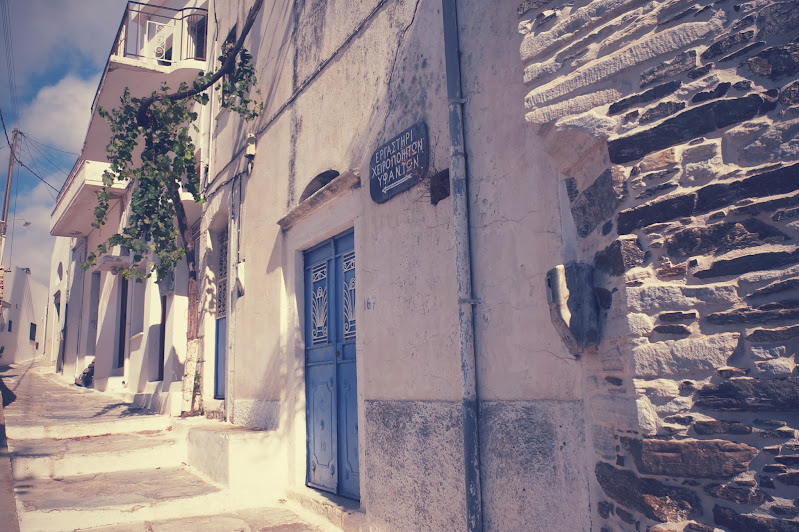 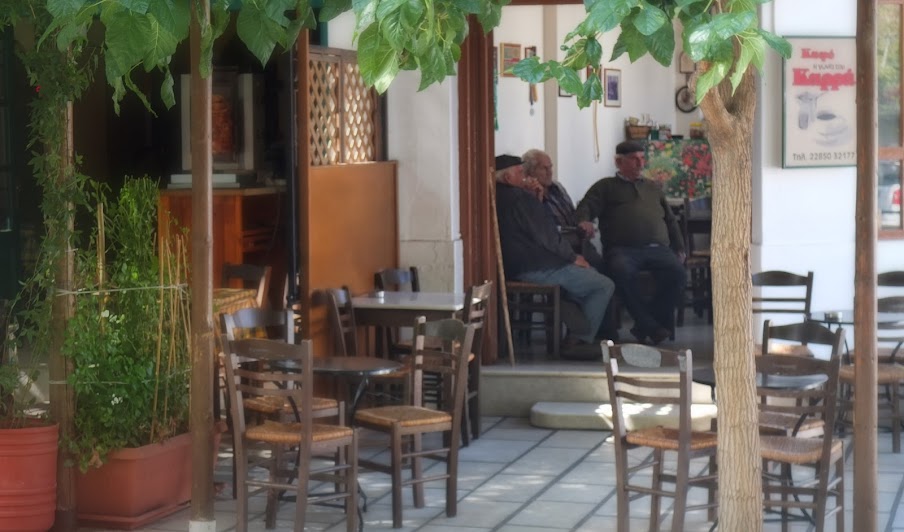 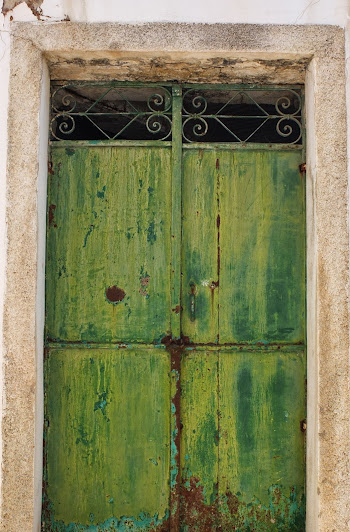 We decided to venture up to the large church overlooking the town. We spend through the small village streets and arrived at the most beautiful vantage point. I long for that feeling as I write this, that of blissful happiness and joy as we looked on. Back on the scooter we journeyed down into the valley and toward the twin villages of Sangri. We mistakenly rode up into the pedestrian-only town only to turn around and head back…we were on our way to the Temple of Demeter. 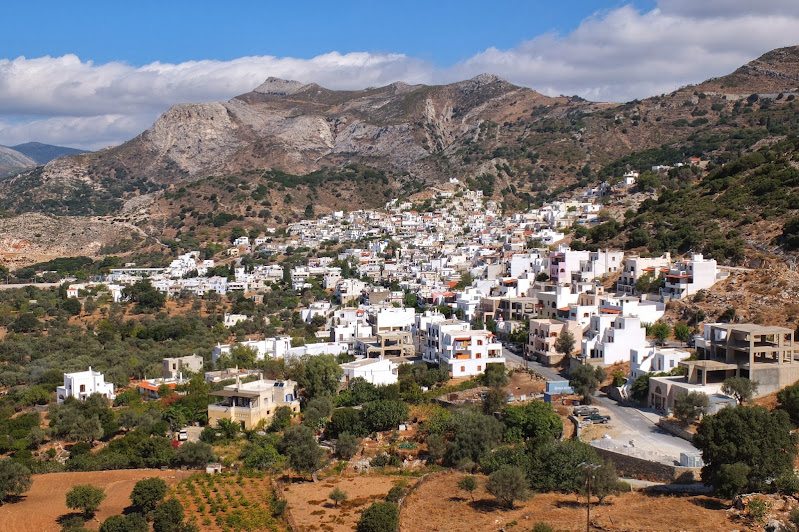 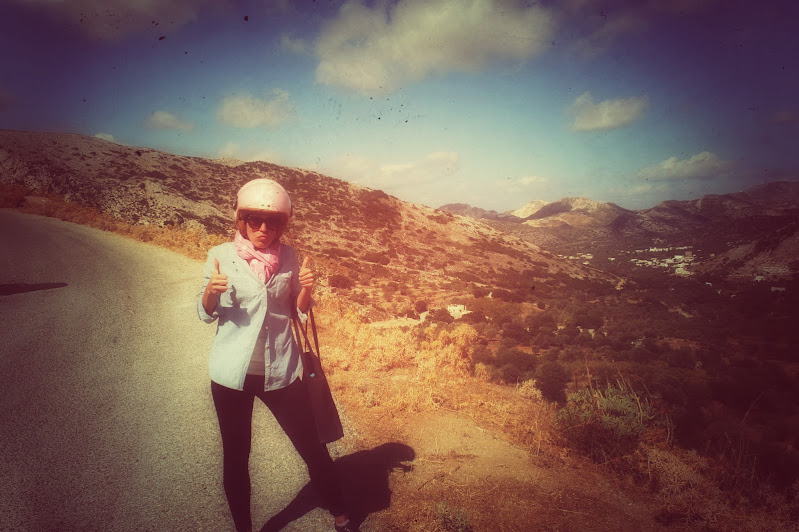 On our way we passed the ruins of Bazeos Castle and saw the sea beyond. I looked to my right and spotted an old man holding a large curved knife, peeling a piece of wood. There was no one else in sight. 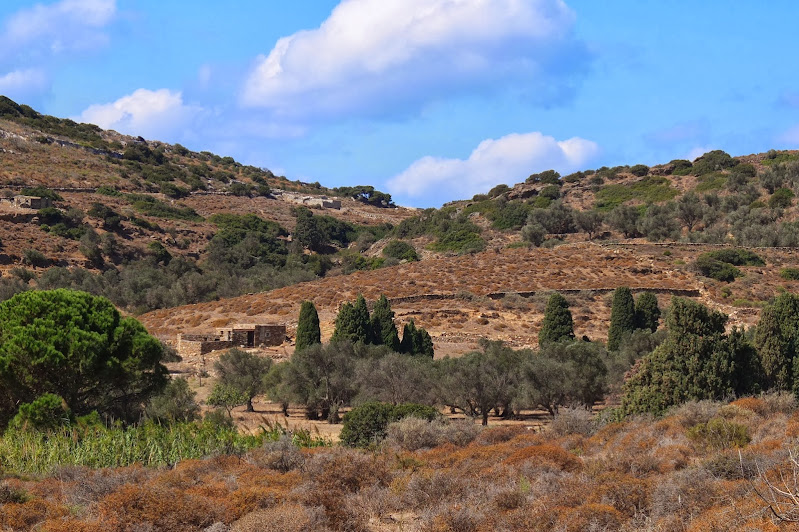 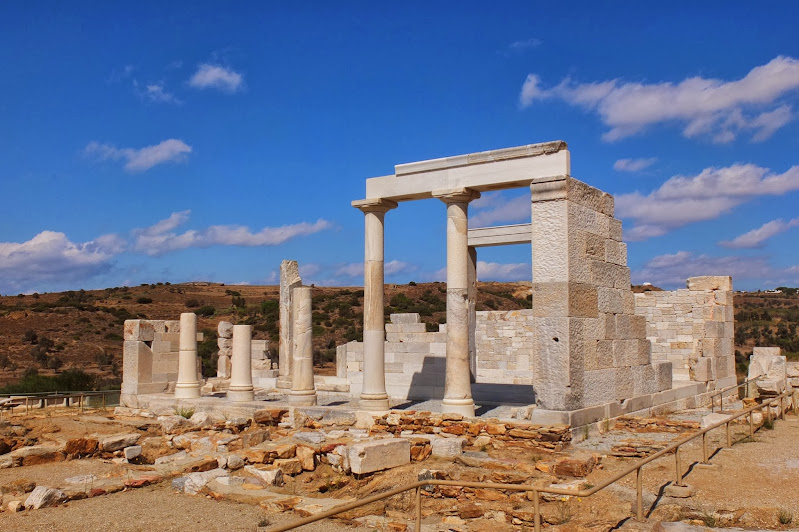 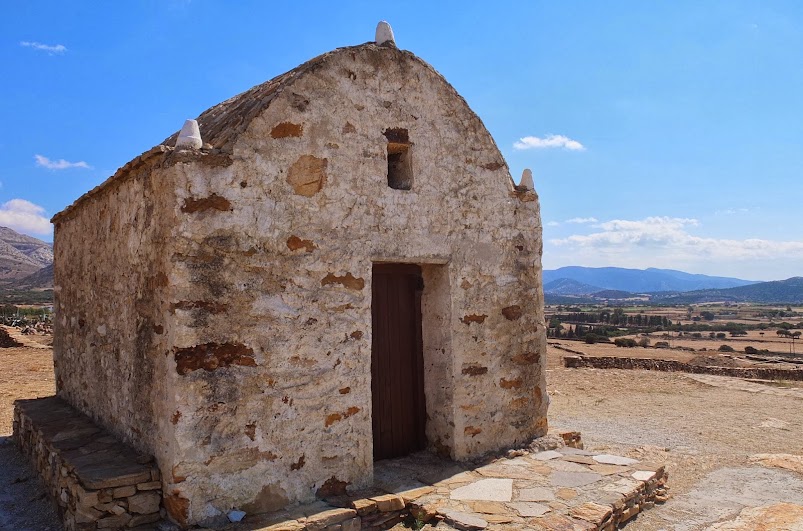 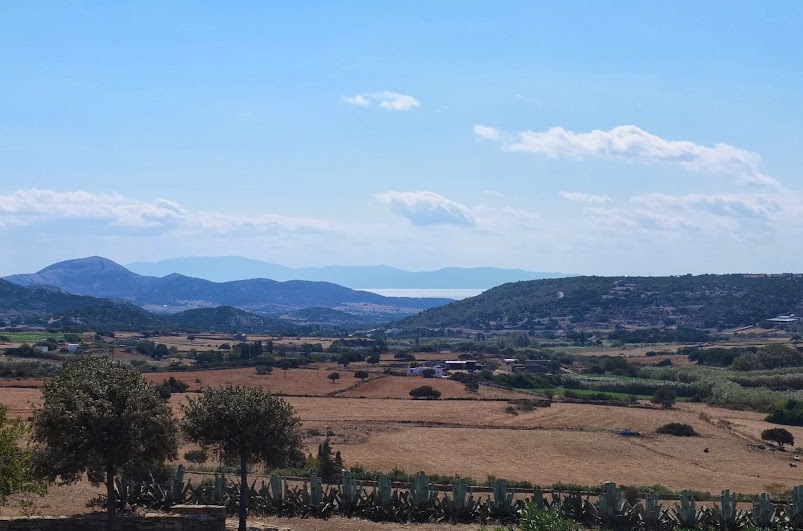 We found our way to the Temple of Demeter. It is mpressive in its own right but most interesting was the area around: sheep and goats for as far as you could see, crumbling shelters and the powerful sea. All this shared with precisely one other couple.

After resting a while, we hopped back on the motorbike and didn’t look back. In the shining afternoon sun we sped down a secondary road, past the olive groves and farms. I caught the image of our shadow against the field and couldn’t help but recognize how good I felt though in disbelief that this was life.

Moments later, we ran into a heard of sheep, bells chiming as they trotted along and surrounded us before moving on. We kept on, hitting full speed on the open road with no one to be seen for miles and miles. The road turned rocky, we slowed down and questioned our direction. Before long, though, we were rewarded with the most idyllic beach we’d ever seen, Agiassos.

There was not a soul to be seen, save for one chicken and one dog. We spotted a restaurant with a chalkboard of specials out front and opened the gate. The dog went crazy, but used to it from Santorini, we kept moving. Once at the house, though, I realized it was abandoned and felt rather foolish as I was most certainly on the porch of someone’s house on an abandoned beach. 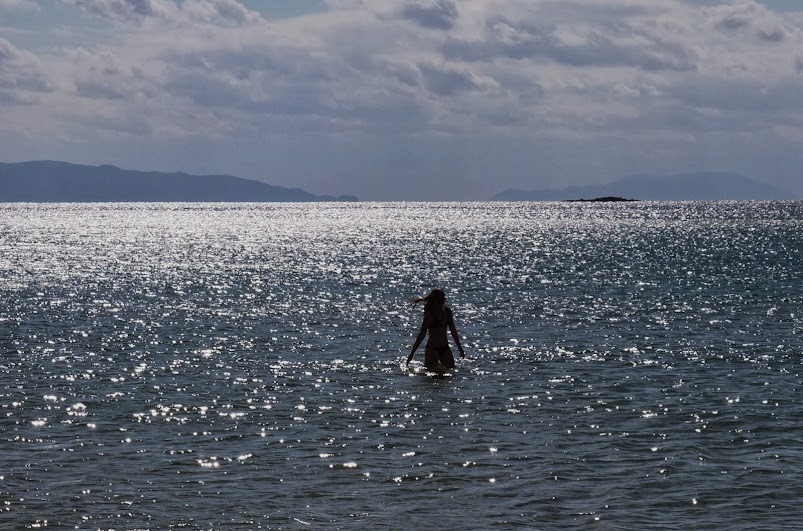 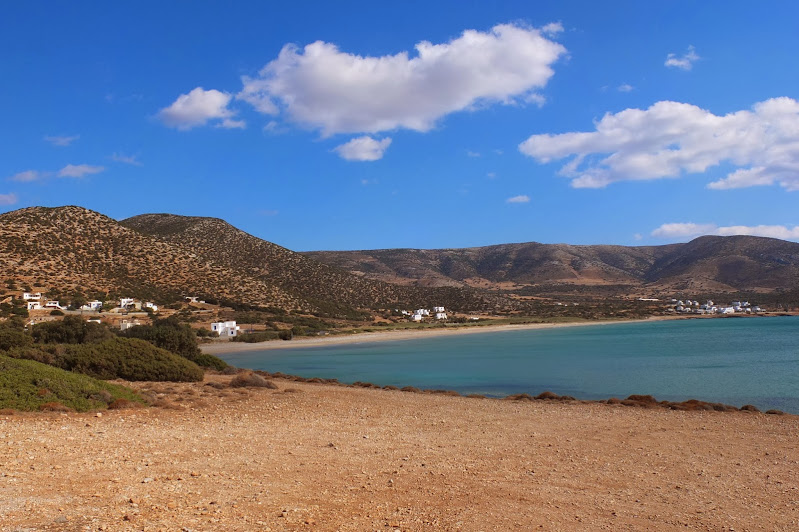 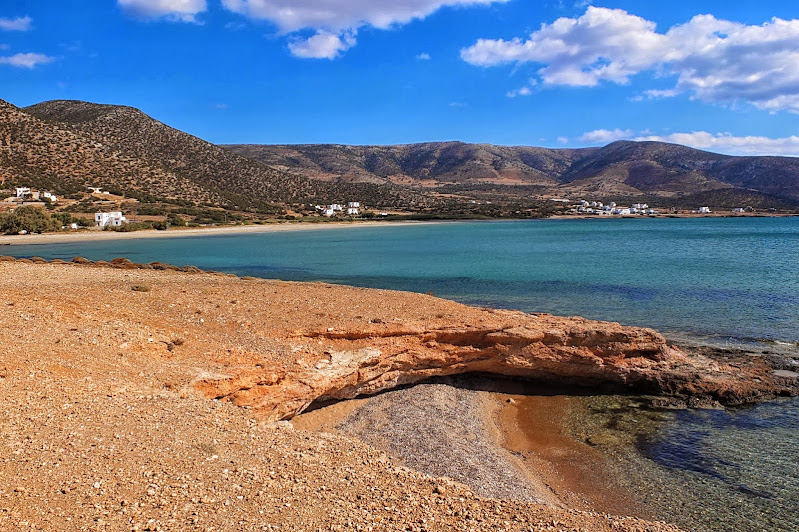 We returned to the beach itself and spread out our towels. I couldn’t resist having the sea to myself and although the air was far too cool, I ran in. The water was that blue…you know, the kind from the photos you see. I kept spinning around, taking it in as thoroughly as I could before we began our journey to find somewhere to eat.

The road was dirt the entire way so needless to say, we stopped at the first place that appeared. Two people were sipping beers and the owners were chatting with them. No one spoke English it seemed and I was hungry and confused. The sweet owner offered us wine, I agreed but there was no menu in sight. So I walked over and started gesturing asking if we could buy something to eat since the kitchen seemed bare. Immediately the woman returned and explained that she would make the following things. We simply said yes and off she went. 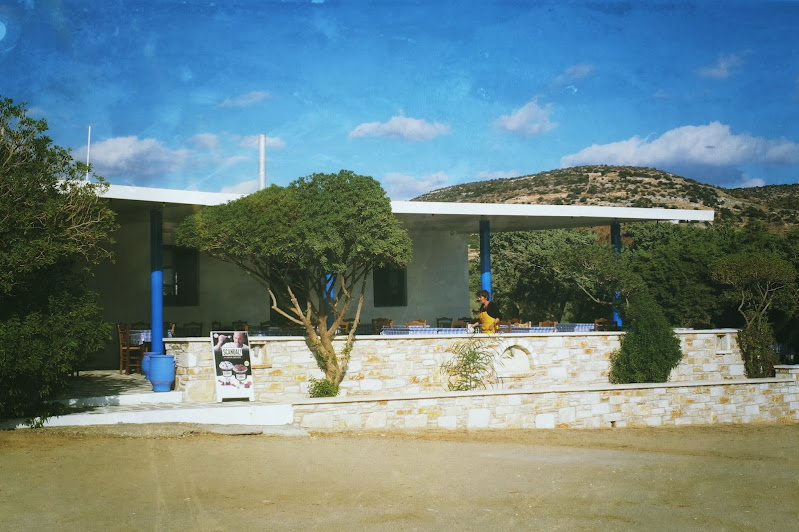 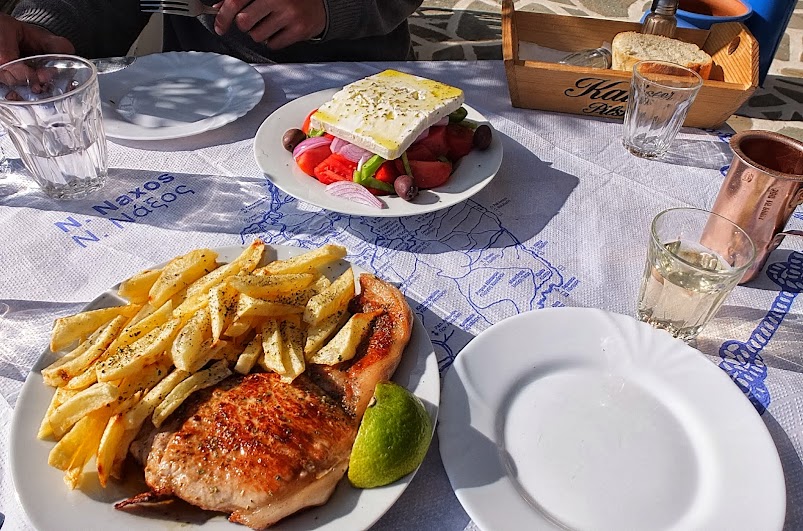 Twenty minutes later or so, after we heard her in the kitchen chopping and frying, she returned with one of my favorite meals of our trip. It was a large pork chop with fried potatoes and a huge Greek salad for 14 euros. I snapped a photo of it and she touched her heart from across the patio and grinned and said photo. To the couple who had just walked over to introduce themselves as tourists from Eastern Europe, I told them Tell her she’s going to be famous!

The entire ride home I felt like we were flying. We passed the most interesting people coming in the opposite direction, one man on a scooter carrying a chainsaw, the other with a passenger and a huge box containing who knows back. We decide now that we’ll keep the bike for another day.

We arrived back into town and I shouted for us to stop as I spotted a store that I’d been meaning to visit, one that sold all local items from the island. There were rows of spices and cheeses and re-purposed plastic bottles filled with olive oil and wine. 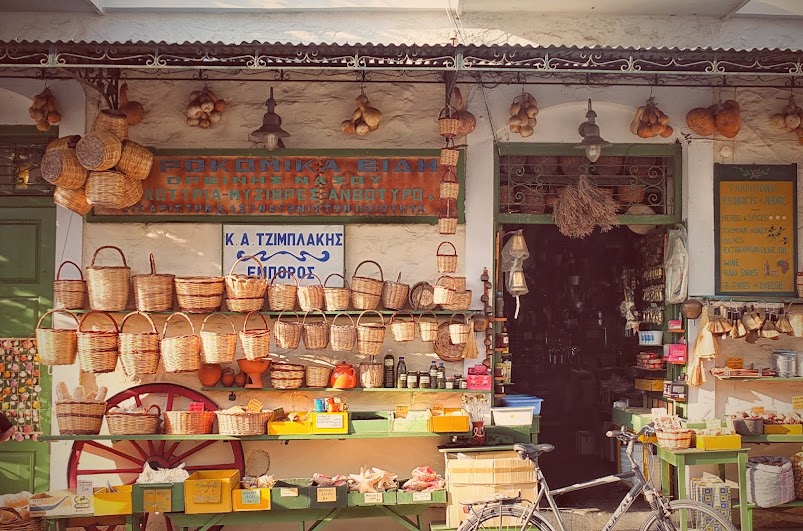 We arrived back at our hotel to a snack and wine from the owner’s father. We chatted for a bit, he gave us a tip for his favorite restaurant in town…one we visit for two nights in a row, the most perfect spot that I’ll detail tomorrow. As we mention we must run, he continues tomorrow you come for coffee…You come to Greece for the sights, yes, but most important are the people.